Sources told Zee Media that over 1,500 people were present inside the pandaal when it collapsed due to rain and strong wind. 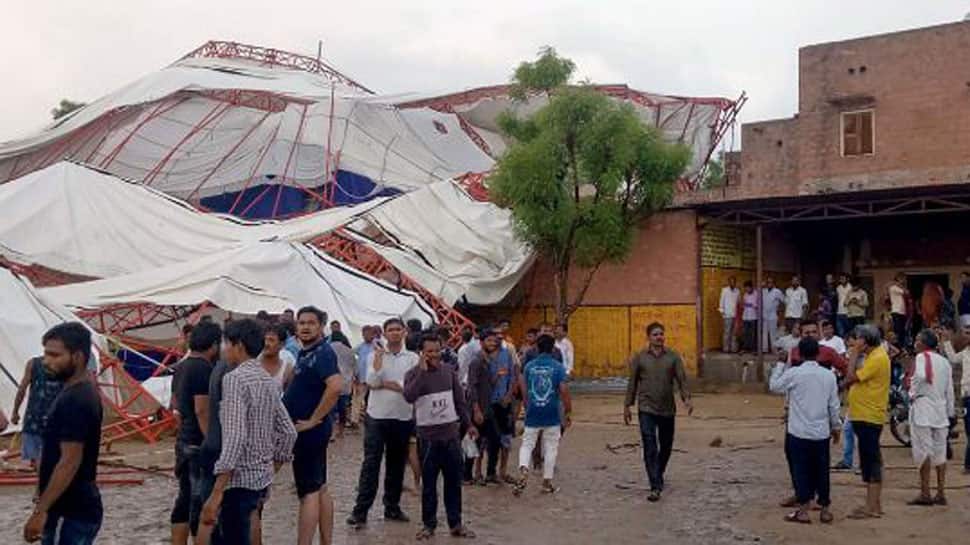 NEW DELHI: Prime Minister Narendra Modi and Home Minister Amit Shah on Sunday expressed their condolences over the death of 14 people after the 'pandaal' erected for a religious gathering collapsed at Rajasthan's Barmer village due to rain and storm. The incident, which left around 70 injured, happened at around 4:30 pm when a religious event was underway at Jasol area of Barmer.

Sources told Zee Media that over 1,500 people were present inside the pandaal when it collapsed due to rain and strong wind. Sources added 45 of the injured were in critical condition and are receiving treatment at nearby Nahata hospital in Balotra city. As the tent collapsed, fans hung to the ceiling fell on the ground which was already wet due to rain, resulting in deaths of people due to electric shocks.

"Collapse of a `Pandaal` in Rajasthan`s Barmer is unfortunate. My thoughts are with the bereaved families and I wish the injured a quick recovery," the PMO quoted Prime Minister Modi, as saying in a tweet.

Collapse of a ‘Pandaal’ in Rajasthan’s Barmer is unfortunate. My thoughts are with the bereaved families and I wish the injured a quick recovery: PM @narendramodi

Pained to know about the loss of lives due to collapse of a Pandaal in Barmer, Rajasthan. I express my deepest condolences to the bereaved families. May the injured recover quickly.

Rajasthan Chief Minister Ashok Gehlot also expressed sympathies with the families of the victims and those who suffered injuries in the unfortunate incident. Gehlot tweeted that he had ordered the local authorities to carry out the relief and rescue operations without any delay.

The Rajasthan chief minister ordered a probe in the incident and also announced Rs 5 lakh in compensation each to the next of the kin of those who lost their lives and Rs 2 lakh for those injured in the mishap. "The local administration is carrying out relief and rescue works. They have also been told to investigate the incident, ensure treatment for the injured people and to provide all other help to the families of the victim," said Chief Minister Gehlot in a tweet.

Congress president Rahul Gandhi said that the loss of lives in the accident at Barmer is very and unfortunate and he wished speedy recovery to the injured. "The loss of lives in the accident in Jasol, Barmer, due to the collapse of tents during Ram Katha is very sad and unfortunate. I pray to God for peace to the departed soul. I wish the injured speedy recovery," Gandhi tweeted.

Former Rajasthan chief minister and senior BJP leader Vasundhara Raje also expressed deep sorrow over the incident and urged the BJP workers to help the victims of the tragedy. "I appeal to all the BJP workers to help their brothers and sisters who have become a victim and to their families, due to the tragedy. I also request the state government to provide immediate financial help to the families of the victims and to those who are injured," tweeted Raje.