Pramod Sawant was chosen to be the next Goa CM after the death of Manohar Parrikar on Sunday. 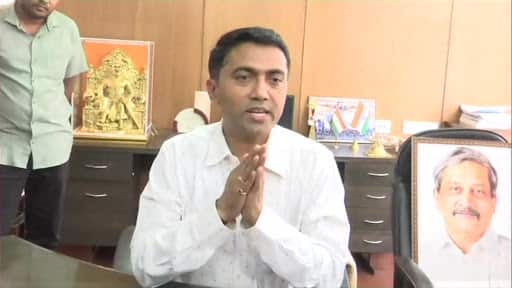 Pramod Sawant, who was sworn-in as Goa's chief minister in the wee hours of Tuesday morning, took charge at his office around noon on the same day.

Sawant was chosen to be the next Goa CM after the death of Manohar Parrikar on Sunday. Parrikar, a four-time CM, was suffering from pancreatic ailment since February of 2018. He was cremated with full state honours.

While the entire country mourned Parrikar's death, a political tussle ensued with Cogress staking claim to form the government even as BJP and its allies debated on who would replace Parrikar. Sawant, Speaker in the Goa Assembly and a staunch BJP loyalist, was eventually picked for the post with Goa Forward Party's Vijai Sardesai and Maharashtrawadi Gomantak Party's Sudin Dhavalikar as his deputies.

Speaking to Zee News shortly after taking charge, Sawant said that he would try his best to work for Goa's betterment. "It is not easy to fill the shoes of Parrikar ji  but I will try my level best," he said.

A floor test now awaits in the 40-member Goa Legislative Assembly although the current strength of the House is 36.

Goa Chief Minister Pramod Sawant: We are going for the floor test tomorrow. There will 2 deputy CMs in this government- Vijay Sardesai and Sudin Dhavalikar. And I request all the people to not congratulate me or welcome me with flowers during the 7-day mourning period. pic.twitter.com/984g6UohEV

The Congress is the single-largest party here with 14 MLAs, followed by BJP with 12. MGP and GFP - allies of BJP - have three MLAs each while there are three independent MLAs who support BJP. Apart from these, there is one MLA from the Nationalist Congress Party.

BJP allies had previously come together with their support on the condition that Parrikar would be the CM. After his death, there were political posturings with most of them demanding the post for their candidate. The move to have deputy CMs from MGP and GFP, however, could help BJP succeed in the floor test even if one of its own MLA - Pandurang Madkaikar - is in the hospital and could be missing on Wednesday.