Sushma Swaraj's husband, daughter salute her before her final journey

Bansuri Swaraj and Swaraj Kaushal, the daughter and husband of former External Affairs Minister Sushma Swaraj, paid 'salute' as state honours were being accorded to the departed BJP leader ahead of her last rites. 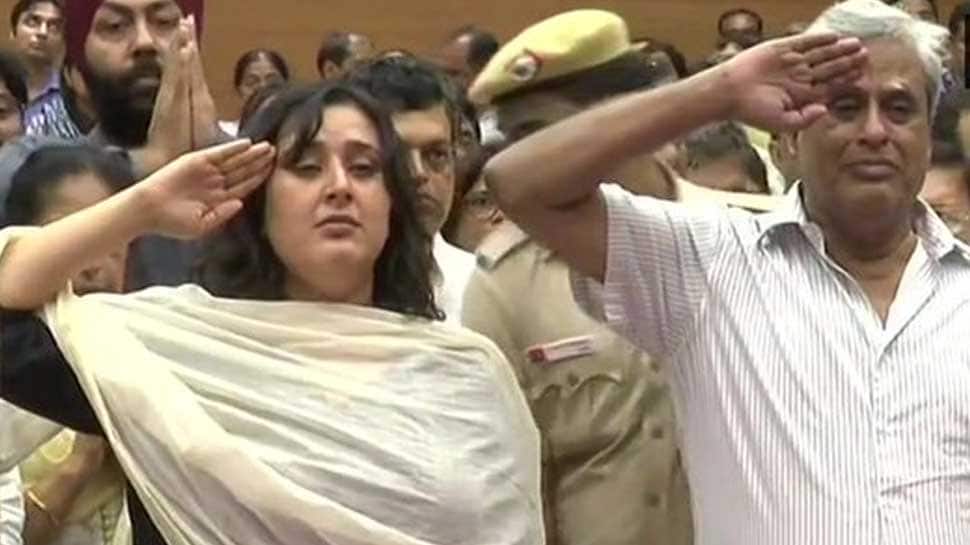 NEW DELHI: As the entire nation mourns the demise of former Union minister Sushma Swaraj, her daughter and husband and many others paid their last respects to the popular BJP leader, who died of a massive cardiac arrest on Tuesday evening, ahead of her last rites at the Lodhi Road crematorium on Wednesday.

Bansuri Swaraj and Swaraj Kaushal, the daughter and husband of former External Affairs Minister Sushma Swaraj, paid salute to her as state honours were being accorded to the departed BJP leader ahead of her last rites.

Swaraj, who passed away at AIIMS, was BJP's most prominent woman face.

''She brought a human touch to the Ministry of External Affairs and was very accessible. She played an effective role in the rescue of many Indians around the world. She was an effective orator and had equal command on both Hindi and English. In her untimely demise, the nation has lost an able administrator, an effective parliamentarian and a true voice of people," he added.

Swaraj breathed her last at the age of 67 here on Tuesday night.

She was admitted to All India Institutes of Medical Sciences (AIIMS) following a deterioration in her health.