A total of 12.900 Kgs of the crystalline heroin was recovered from two lady passengers, from their three suitcases. 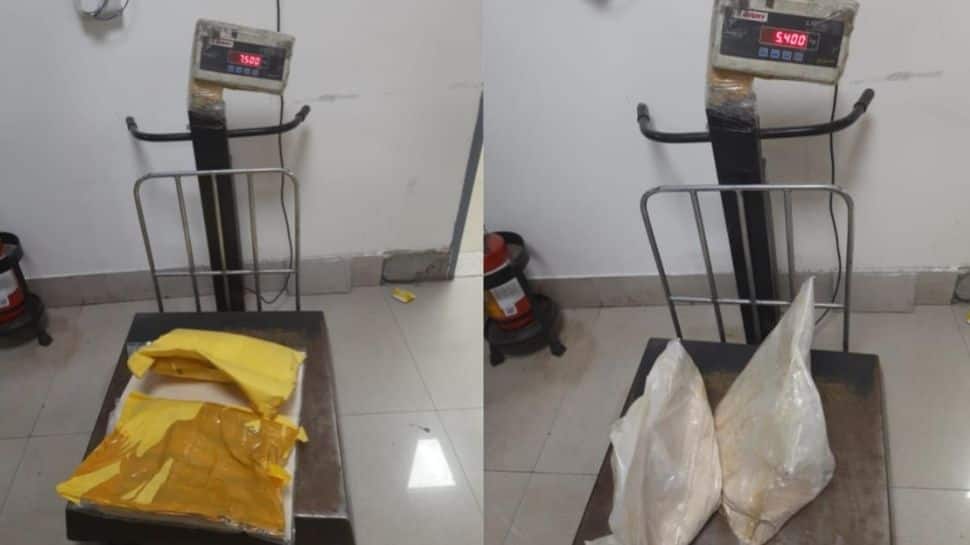 New Delhi: Scaling up its fight against the drug smugglers and syndicates, Customs officers at IGI Airport, New Delhi in yet another successful operation seized a cumulative quantity of 12.9 Kgs of Heroin from two Ugandan Nationals who had arrived from Nairobi (Kenya) via Abu Dhabi during the intervening night of 12th and 13th November 2021. The value of the seized Narcotic is approximately pegged at Rs 90 Crores as per the prevailing international prices.

The narcotic and the smugglers had passed through several jurisdictions including Uganda, Kenya and India, before being intercepted. The said heroin was concealed in the false bottom of their check-in luggage.

A total of 12.900 Kgs of the crystalline heroin was recovered from two lady passengers, from their three suitcases.

The baggage of the passengers was also sniffed by the canines of the Dog Squad of the Indian Customs stationed at the Delhi Airport and the canine indicated the presence of some narcotic substance in the baggage. On detailed personal and baggage search and questioning, the lady passengers admitted to having brought the heroin in their checked-in baggage by ingeniously concealing the Heroin in the specially made cavities beneath the fake layer of the fiber-plastic base on both the sides of the suitcases. It was vacuum packed in plastic and paper bags containing a crystalline form of off-white-colored powder/granules of Heroin.

During the questioning, one of the lady passengers revealed that she was introduced to a Kenyan national, who had promised her money in exchange for delivery of certain goods in Delhi.

Thus, on this invite, the lady passenger travelled to Nairobi from Kampala by road where the Kenyan handed over a bag to be delivered in Delhi while also providing tickets and certain documents to cover her visit as a Medical tourist. She was supposed to deliver the goods to a person who would contact her on exit. When she was intercepted by Customs officials, she was found to be in possession of a bag with a false bottom/cavity where 5.4 kgs of Heroin was concealed.

The other female passenger was also intercepted in the same flight in an almost similar manner wherein she was found to be in possession of two bags with false bottom/cavity containing a cumulative of 7.5 kgs of concealed heroin. During her preliminary questioning, the lady passenger revealed that she was sent by her sister from Kampala to Nairobi by road and from there to Delhi via Abu Dhabi by the aforementioned flight. This passenger was also possessing certain documents to fake the profile of a medical tourist.

The success against the drug smuggling menace comes in the wake of an earlier seizure of approx. 3 kgs of heroin were recovered from a Kenyan National who had arrived in the intervening night of 28th and 29th October 2021 from Nairobi via Sharjah. Before also, on 23.04.2021, two Indian nationals who were coming from Uganda were intercepted with 2 kgs of heroin wherein investigation resulted into the identification of 3 more accused persons who are based out of Uganda.

In this calendar year, the Delhi Customs have seized more than100 kgs of heroin. More than 26 persons have been arrested. Given the spurt in the attempts to smuggle in narcotics through the passenger route, Indian Customs have heightened the scrutiny and checking of suspects through robust intelligence gathering mechanisms and pinpointed profiling at all the international airports. The Customs department is at the forefront of the crusade against drugs smuggling and syndicates. In September this year, a huge consignment of 3000kgs of heroin was seized at Mundra port.

26 Naxalites killed in encounter with police in Maharashtra's Gadchiroli