Ahead of Ram Temple 'bhoomi pujan', UP CM Yogi Adityanath arrives in Ayodhya to review preparations

PM Modi is likely to lay the foundation stone of the Ram Temple in Ayodhya on August 5, according to Mahant Nritya Gopal Das, the president of the temple trust. 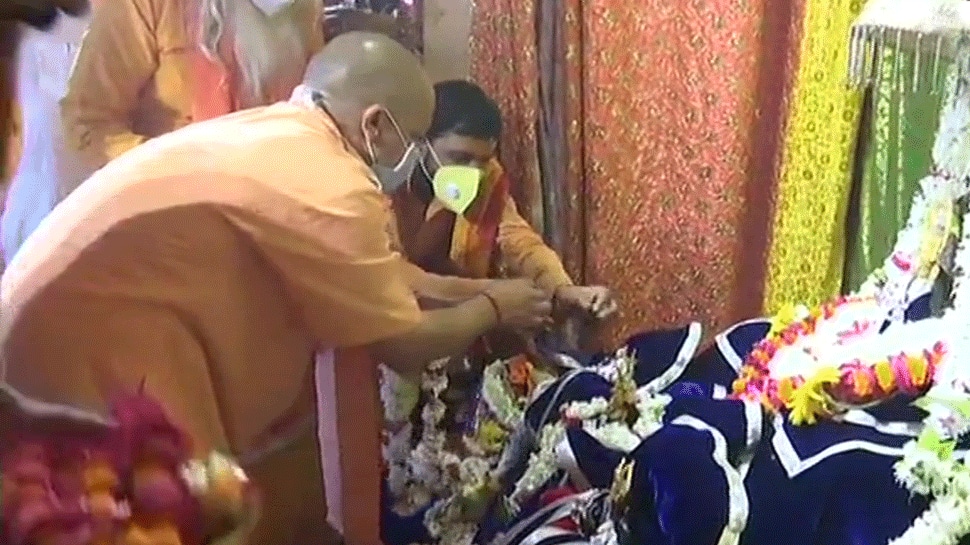 Lucknow: Uttar Pradesh Chief Minister Yogi Adityanath arrives in Ayodhya on Saturday (July 25) to review preparations for the 'bhoomi pujan' for the construction of Lord Ram temple at the Ram Janmabhoomi premises.

The Chief Minister offered prayers to Lord Ram at Ram Janmabhoomi site. According to reports, he will today place Laxman, Bharat and Shatrughan on new 'asanas' at the Ram Janambhoomi.

Prime Minister Narendra Modi is likely to lay the foundation stone of the Ram Temple in Ayodhya on August 5, according to Mahant Nritya Gopal Das, the president of the temple trust.

For this, five scholars from Varanasi will arrive in Ayodhya, under whose supervision the bhoomi pujan of Shri Ram Janmabhoomi Temple will be performed. The five dignitaries from Varanasi would include three astrologers, two saints.

The scholars will reach Ayodhya on August 4, a day ahead of the bhoomi pujan. They will bring with themselves five silvar 'Bel' leaves, touched by the shivling of Baba Vishwanath, which will have 'Jai Shree Ram' inscribes on it.

The construction of Ram temple in Ayodhya will begin after the ceremony to lay the foundation stone in which CMs of many states, ministers from the union cabinet and RSS chief Mohan Bhagwat are also likely to participate.

The Ram Janmabhoomi Teertha Kshetra Trust, set up in accordance with the Supreme Court verdict, held its second meeting last week. In March this year, the Ram Lalla idol was shifted to a temporary structure near Manas Bhawan in Ram Janmabhoomi premises till the completion of the construction of Ram temple.

The 'bhoomi poojan' or groundbreaking ceremony for the construction of the Ram Temple signifies the rightful return of Lord Ram to Janmabhoomi after years of exile.

Ahead of the construction of the Ram Temple, and during 'bhoomi poojan', the plan is to light every temple and house in Ayodhya with diyas and candles to replicate the resemblance of the day Lord Ram returned to Ayodhya after spending 14 years in exile.

According to sources not just Ayodhya but an appeal will be made to everyone to light up their households and religious places like temples in their vicinity while taking care to ensure precautions of physical distancing to mark the special occasion.

Sources have also stated that keeping in mind the present situation of COVID-19, around 200 invites are being sent. Senior VHP functionary and secretary-general Milind Parande told ANI that had it not been for COVID-19 spread, the event would have been attended by lakhs and crores of believers.

Priests and saints are set to arrange prayers in respective temples from 10:30 am and the VHP has appealed to people to watch the bhumi pujan ceremony on their respective TV screens, be it auditoriums or halls apart from lighting diyas in their homes in the evening.

According to those who led the fight to restore Ramlalla in its glory and temple as Lord Ram`s birthplace the fight is not years but centuries old. Senior BJP leader LK Advani led a rath yatra in which car sewaks participated to claim the land for Ram temple. It eventually led to destruction of Babri Masjid.

The Supreme Court had on November 9 last year directed the Central Government to hand over the site at Ayodhya for the construction of a Ram temple.

The Prime Minister had on February 5 announced the formation of a trust for construction of Ram Temple in Ayodhya.

The 15-member Ram Janmabhoomi Teerth Kshetra Trust has been mandated by the central government to oversee the construction of Ram temple in Ayodhya.