Visit to Kartapur Gurudwara in Pakistan will be visa-free: PM Narendra Modi

He also patted his government on the back saying that it's because of the efforts of the Central government that the Kartarpur corridor is being built. 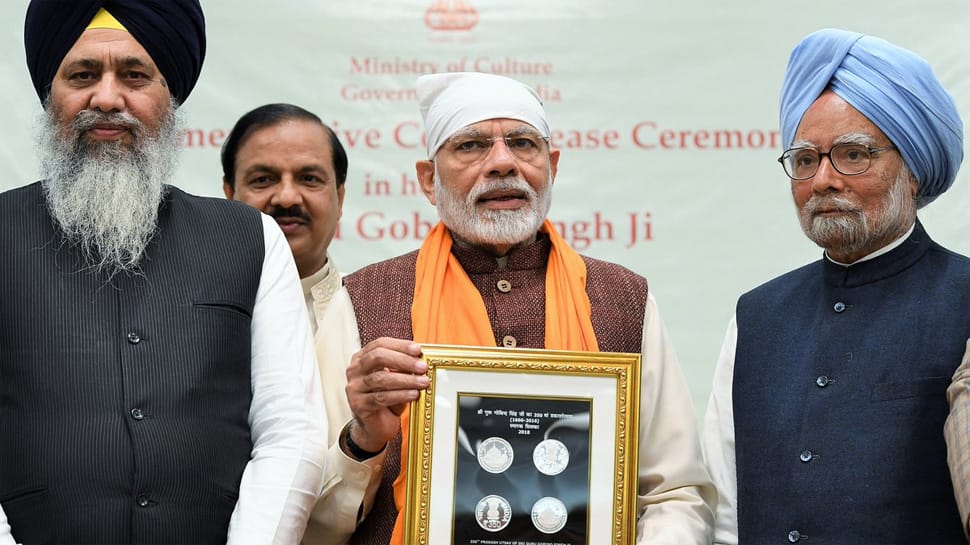 NEW DELHI: Prime Minister Narendra Modi on Sunday released a commemorative coin to mark the birth anniversary of Guru Gobind Singh. While releasing the coin, the PM said that pilgrims will soon be able to have a visa-free entry at Darbar Sahib in Pakistan.

"Through Kartarpur corridor, Sikh devotees will be able to make visa-free pilgrimage to Darbar Sahib in Narowal in Pakistan on the 550th birth anniversary of Guru Nanak Dev," he said. Former Prime Minister Manmohan Singh was also present at the event.

He also patted his government on the back saying that it's because of the efforts of the Central government that the Kartarpur corridor is being built. "Now, Indians and Sikh don't need to use binoculars, they can go to Narowal without visas and can pay respects at the Darbar Sahib." Recalling the partition of India, he said that the corridor is "atonement of the mistake of August of 1947".

Earlier in the day, President Ram Nath Kovind and the Prime Minister paid homage to the tenth Sikh master on his 352nd birth anniversary.

"Homage to Guru Gobind Singh on his birth anniversary. He devoted his life to serving the people and upholding truth, justice and compassion. The example and teachings of Guru Gobind Singh continue to inspire us," Kovind tweeted.

In his tweet, Modi said: "I bow to Sri Guru Gobind Singhji on his jayanti."

Guru Gobind Singh is revered by the Sikh community as he founded the 'Khalsa Panth', the warrior Sikh community, at Anandpur Sahib in 1699.