A 30-feet-tall gigantic model of dinosaur built near the Statue of Unity in Gujarat's Narmada district collapsed on Sunday. 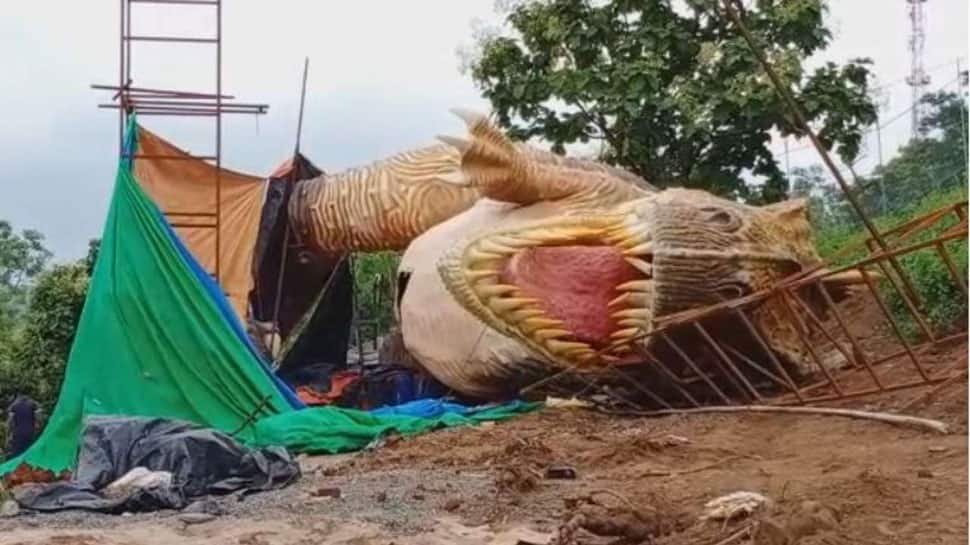 Narmada: A 30-feet-tall gigantic model of dinosaur built near the Statue of Unity in Gujarat's Narmada district collapsed on Sunday.

The under-construction huge replica of a dinosaur was built at the cost of Rs 2 crore as part of a tourist attraction plan of the Gujarat government. It took a month's time to build the dinosaur model which fell to the ground on Sunday.No injuries were reported in the incident.

The 30-feet unchained dinosaur fell down. It was designed to attract tourists. pic.twitter.com/cohw6rV6Zc

The model cost around Rs 2 crore rupees. It took more than a month to make. pic.twitter.com/ELT7nrF9Ak

The incident raised several questions regarding the viability of the project and the tender who passed the project.

The project aims at constructing a number of attractions such as river rafting, a safari park, and several others to attract a large number of people towards recently-inaugurated an imposing 182-metre (597 feet) statue of Sardar Vallabhbhai Patel in Gujarat's Kevadiya. The replica of dinosaurs is a part of such tourist attractions.

Built in the honour of Sardar Vallabhbhai Patel, the world's tallest Statue of Unity was dedicated to the nation by Prime Minister Narendra Modi on October 31, 2018. The imposing monument is twice the height of Statue of Liberty and is built on an islet, Sadhu Bet, near the Sardar Sarovar Dam in Narmada district.

The monument was conceptualised by PM Modi during his tenure as Gujarat Chief Minister and he had laid the foundation stone for it in 2013.