There was a rare display of bonhomie between Yogi Adityanath and Azam Khan. 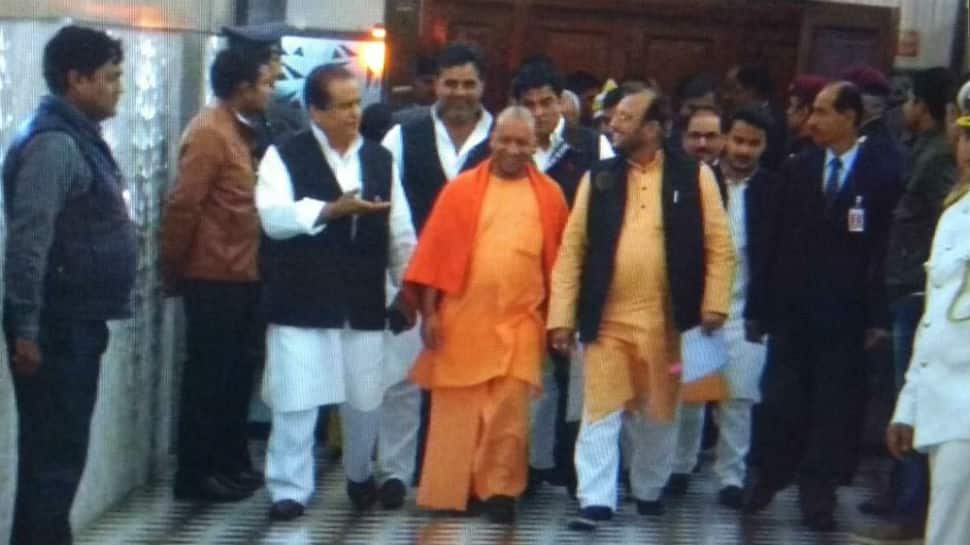 There was a rare display of bonhomie between Uttar Pradesh Chief Minister Yogi Adityanath and Samajwadi Party leader Azam Khan on Thursday. The two leaders, who have always been vocal against each other, were photographed holding hands in the UP Assembly.

This happened on the first day of the Winter Session of the Uttar Pradesh Assembly.

They were accompanied with other leaders, including Bharatiya Janata Party (BJP) leader Suresh Kumar Khanna.

When mediapersons spotted the two leaders walking hand-in-hand in the corridors of the UP Assembly, they requested them to pose for photographs.

According to reports, Yogi Adityanath and Azam Khan reached the assembly at the same time and met each other before entering the corridors. They shared greetings and walked inside holding hands, which caught the attention of mediapersons.

However, the bonhomie did not last long. As the session began, the Samajwadi Party leader continued his attack on the Adityanath government. He even sat on a dharna inside the Assembly.

Azam Khan's son Abdullah is also seen in the picture.

The development inside the UP Assembly was indeed rare, considering the rivalry between the two political opponents. Earlier this year when Adityanath said that Namaz and Surya Namaskar were similar, Azam Khan had asked him if he would "prefer to offer Namaz" instead of going for Surya Namaskar.

"Since you find similarities between surya namaskar and namaz, will you prefer to offer namaz?" he had asked the chief minister.

The SP general secretary had also said he could not comprehend how the prayers offered by Muslims were similar to the sun salutation and questioned Adityanath's intention behind the comment.

Khan said no one would "restrain Adityanath from offering namaz".

This was in reaction of the UP Chief Minister's statement on Namaz. He had said, "All asanas (postures) in surya namaskar, pranayama activities are similar to the way namaz is offered by our Muslim brothers. But nobody ever tried to bring them together because few people were interested only in 'bhoga' not yoga."