Political parties of the Valley appreciated Shah's gesture and hoped for announcement of measures to ensure peace in the state.

SRINAGAR: Amit Shah became the first Home Minister of the country to visit a martyr's home in Kashmir. Shah, who is on a two-day visit to the state, met the family members of martyred Jammu and Kashmir Police SHO Arshad Ahmed Khan, who was killed in a terror attack in Anantnag on June 12.

Amid tight security arrangements, Shah visited the family at around 9:15 am alongside top Home Ministry officials. Shah assured Arshad's wife and father of government's assistance and also played with the martyr's two little children. He later offered a job to the martyr's wife. 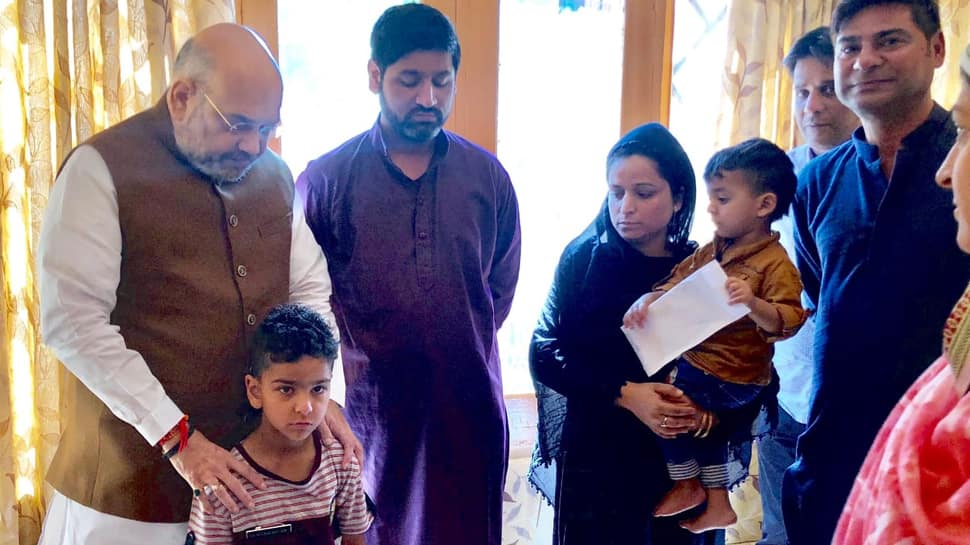 Political parties of the Valley appreciated Shah's gesture and hoped for the announcement of new measures to ensure peace in the state.

“Home Minister's visit is a welcome move, but he should also make some positive announcement,” said Jammu and Kashmir National Conference spokesperson Imran Nabi Dar. “Elections should be held in the state, the political solution of Kashmir is also needed,” he added.

Arshad was injured in the Anantnag fidayeen attack, which claimed the lives of five CRPF personnel. He was later flown to Delhi in an air ambulance for specialised treatment but succumbed to injuries at the All India Institute of Medical Sciences (AIIMS).

Shah also reviewed the overall security situation in the state with special emphasis on restoration of peace in Kashmir and counter-insurgency operations. He arrived here Wednesday on his maiden visit to the state after taking over the charge of the Home Ministry, signifying the importance given to Jammu and Kashmir by Prime Minister Narendra Modi's government.
This was Shah's first official visit outside the union capital after assuming charge.