Thousands gathered to pay their final respects to CRPF martyrs even as Pakistani troops violated ceasefire in J&K. India had already revoked the Most Favoured Nation status given to Pakistan. 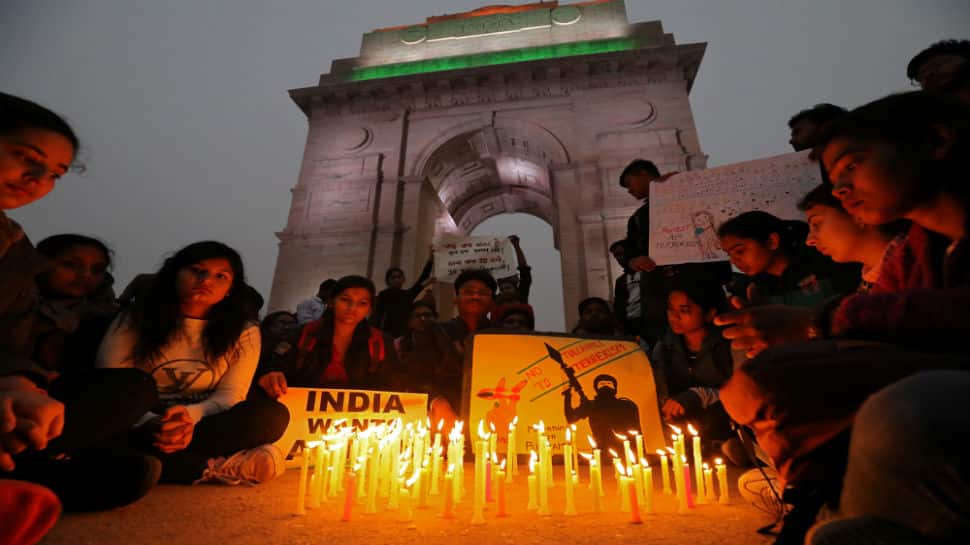 The anger in India refuses to fade. And it shouldn't.

40 families bid a teary farewell to their respective kin who were martyred in Thursday's terror attack on a CRPF convoy. With them were thousands of people in the native places as well as a billion countrymen in paying their last respects.

Meanwhile, an all-party meeting on Saturday decided on several resolutions in response to the suicide attack which also injured many troopers.

"We condemn terrorism in all forms and the support being given to it from across the border. Terrorism being actively encouraged by forces from across the border, India has displayed firmness, resilience in tackling it. We stand united in solidarity with our security forces in fighting terrorism, defending India's unity and integrity," said the resolution passed at the all-party meeting.

The meeting was convened by Home Minister Rajnath Singh and invitations were extended to all major political parties. The decision to convene the all-party meeting was taken at a meeting of the Cabinet Committee on Security, chaired by Prime Minister Narendra Modi.

Meanwhile, a high alert has been sounded in J&K and the security forces have been directed to remain vigilant. Curfew has also been imposed in several sensitive areas across the state.

The NIA and NSG investigators have collected forensic samples for credible leads regarding the Pulwama attack. At least seven people have been apprehended by the police and are being examined in connection with the attack.

After India's decision to revoke the status of 'Most Favoured Nation' given to Pakistan, customs duty on Pakistani goods has been raised to 200% with immediate effect.

In high-level meeting called by J&K Governor Satya Pal Malik, he has directed cops to show no mercy towards anyone indulging in violence, arson or rumour mongering, irrespective of their political and religious affiliation.

Karnataka: Visuals from Gudigere, Mandya as mortal remains of CRPF Constable Guru H are being brought for last rites. Family members pay their tribute to him. #PulwamaAttack pic.twitter.com/mmonbja2mI

CRPF officers and their family members hold a candle march in Bhopal to pay tribute to their fellow troopers who were martyred in Awantipora.

Madhya Pradesh: #CRPF officers and their family members hold a candle march in Bhopal to pay tribute to the soldiers who lost their lives in #PulwamaAttack pic.twitter.com/0y6lXuge0x

Breaking news: An Army Major has lost his life in an IED explosion in J&K's Rajouri district.

News agency ANI reports that he was trying to diffuse the IED planted by terrorists 1.5kms inside the Line of Control. The martyred officer belonged to the Corps of Engineers.

Bihar: Visuals from Ratanpur, Bhagalpur as mortal remains of CRPF Constable Ratan Kumar Thakur are being brought to his home. His father (Pic 4) had said after the #PulwamaAttack, "I will send my other son as well to fight. But Pakistan must be given a befitting reply" pic.twitter.com/3d7gy9xGaw

Emotions are running high in native places of martyred CRPF personnel as mortal remains are brought back. Thousands gather near almost every funeral site in various states to salute the bravehearts. Family members are understandably distraught.

The entire nation is grieving the loss of the brave CRPF Jawans. In their saddest hour, we stand by the bereaved families. Expressing our deepest sympathies, we extend ex gratia of Rs 5 lakh each, to the families of the martyrs: Andhra Pradesh Chief Minister N Chandrababu Naidu

Odisha Chief Minister Naveen Patnaik announces enhancement of the ex-gratia for the kin of CRPF's Prasanna K Sahoo and Manoj Kumar Behera who lost their lives in the Pulwama attack. They will be given an ex-gratia of Rs 25 lakh each instead of Rs 10 lakh. The state will bear the cost of education for their children.

While the entire world is denouncing the terror attack in Pulwama, for the Pakistani media, the suicide bomber who carried out the ghastly killing of 40 CRPF personnel is a "freedom fighter", highlighting their mindset. The Pakistani media also has been busy in making attempts to somehow show that Jaish-e-Mohammad (JeM) outfit, which is based in Pakistan, was not involved, despite the terror outfit itself claiming responsibility for the carnage.Pakistani daily 'The Nation' published a report headlined 'Freedom fighter launches attack..." A report in the same newspaper also quoted some purported "spokesperson" of Jaish-e-Mohammad outfit, claiming that the outfit had "nothing to do with the attack".

Defence Minister Nirmala Sitharaman lays a wreath on the mortal remains of CRPF Constable C Sivachandran in Tamil Nadu's Trichy who lost his life in the attack.

Maharajganj: Visuals from Harpur Tola as mortal remains of CRPF Constable Pankaj Kumar Tripathi are being brought to his home. #PulwamaAttack pic.twitter.com/NoeudOHCuK

Shiv Sena leader Sanjay Raut said, "Resolutions were passed after Pathankot & Uri attack also. We have told them (central government) that they should now take action."

#WATCH: Visuals from the last rites ceremony of Constable Pankaj Kumar Tripathi of CRPF as his mortal remains are being brought to his home in Harpur Tola village of Maharajganj. #PulwamaAttack pic.twitter.com/DsNK0fPeCA

"We condemn terrorism in all forms and the support being given to it from across the border. Terrorism being actively encouraged by forces from across the border, India has displayed firmness, resilience in tackling it. We stand united in solidarity with our security forces in fighting terrorism, defending India's unity and integrity," said the resolution passed at the all-party meeting.

After all-party meeting, Congress leader Ghulam Nabi Azad said, "We stand with the govt for unity & security of the nation and security forces. Be it Kashmir or any other part of the nation, Congress party gives its full support to the govt in the fight against terrorism. We had requested the Home Minister to request the PM on our behalf to ask Presidents of all national & regional parties for a meeting. This was supported by other parties too. The entire nation is in mourning today, is angry. I had also said that barring war, for the first time since 1947 such large number of security personnel have been killed in an attack. We stand with our security forces - Army, CRPF, local police. The entire nation is standing with them."

DG CRPF RR Bhatnagar: I have come to the see the spot, as you have seen the teams are already working here, forensic and NIA teams. The investigation is going on; Once the ivestigation is concluded then only more details can be given. #PulwamaAttack pic.twitter.com/CAPUTv8qvG

Tamil Nadu Chief Minister Edappadi K Palaniswami has announced government jobs to one family member each of the two CRPF personnel from the state who lost their lives in the attack.

PM Narendra Modi targets Pakistan over Pulwama terror attack, says a nation on verge of bankruptcy has now become second name for terror. "Sacrifice of Pulwama martyrs will not go in vain, security forces given free hand to punish perpetrators of the attack. All of us can feel the pain of martyrs' families, we understand your anger over what happened in Pulwama," PM Modi.

Jammu DC, Ramesh Kumar, said, "Curfew was imposed on Friday. No casualties were reported. The situation is under control but as a precautionary measure, we have continued with the curfew. We will decide whether to continue it or not by evening, after assessing the situation."

All party meeting begins in Parliament. The meeting convened by Home Minister Rajnath Singh is being attended by Ghulam Nabi Azad, Anand Sharma and Jyotiraditya Scindia of the Congress, Sudip Bandyopadhyay and Derek O'Brien of the TMC, Sanjay Raut of the Shiv Sena, Jithendra Reddy of the TRS, D Raja of the CPI, Farooq Abdullah of the National Conference, Ram Vilas Paswan of the LJP among others. Naresh Gujral of the Akali Dal, Upendra Kushwaha of the RLSP and Jai Prakash Narayan Yadav are among others who are attending the meeting. Narendra Singh Tomar, and Sharad Pawar are also present.

The parties will be briefed about the attack in Pulwama and the steps being taken by the government so far, a home ministry official said.

Indian National Lok Dal leader Abhay Singh Chautala cancels his visit to Lahore, Pakistan in the light of the attack. Delhi's Patiala House Court had on Friday allowed him to travel to Lahore for a personal visit. He is an accused in a disproportionate assets case.

A team of National Investigation Agency (NIA) reaches the site for further investigation.

Protesters stage a demonstration on the railway tracks at Nallasopara railway station in Maharashtra against Pulwama attack. The train movement has affected Nallasopara and beyond.

Maharashtra: Protesters stage demonstration on the railway tracks at Nallasopara railway station in protest against #PulwamaAttack. Train movement affected at Nallasopara and beyond. pic.twitter.com/BzFLDzyi6z

Leaders arrive at the Parliament, for the all-party meeting called by the central government.

Delhi: Leaders arrive at the Parliament, for the all party meeting called by central govt. #PulwamaAttack pic.twitter.com/qyRJscQXct

US National Security Adviser John Bolton told his Indian counterpart Ajit Doval that America supports India's right to self-defence. Bolton telephoned Doval on Friday to express his condolences for the terror attack in Jammu and Kashmir and offered the US' full support to India in confronting terrorism. "I told Ajit Doval today that we support India's right to self-defence. I have spoken to him twice, including this morning... And expressed US' condolences over the terrorist attack,'' he told PTI. Bolton said the US has been very clear to Pakistan on ending support to terrorist safe havens. ''We have been very clear on that score... And, we are continuing to be in discussions we are going to have with the Pakistanis,'' he said.

JeM had declared that February is the month of Jaish, hence the strike. Out of roughly 70 recruits, Dar was Category C terrorist and remained under the radar.

A month before the attack, the intelligence agencies were getting an input that JeM was planning a strike. But the input was of generic nature but said target was security forces and vital installation. However, the agencies failed to foil the terror plot.

The location of the main conspirater of the attack, Abdul Rashid Gazi, has been traced. He is possibly in Pulwama or Tral region operating from the forest. His role is under scanner. Gazi is the top commander sent by Masood Azhar.

The daughter of CRPF ASI Mohan Lal pays last tribute to her father.

Saudi Crown Prince Mohammad bin Salman`s visit to Pakistan has been delayed by a day. He is now scheduled to arrive in the country for a two-day visit starting from February 17 (Sunday), Pakistan`s Foreign Ministry said on Friday. The Pakistan foreign ministry did not divulge the reason behind the change in schedule, adding that the bilateral engagements "remains unchanged," The Dawn reported. The sudden change in the schedule comes after Saudi Arabia strongly condemned the terror attack in Jammu and Kashmir`s Pulwama district that claimed the lives of 40 CRPF personnel.

Investigation agencies suspect that the explosives were possible smuggled from across the border in small quantities to store them and use altogether for such a huge attack. They have also learnt that the suicide bomber identified as Adil was missing over the last three months. They suspect that during this time, he was in constant touch with Jaish e Mohammed handlers and possible also visited one of their training camps.