Briefing the media in a joint press conference after the meeting, both the leaders discussed the controversy around alleged manipulation of Electronic Voting Machines (EVMs). 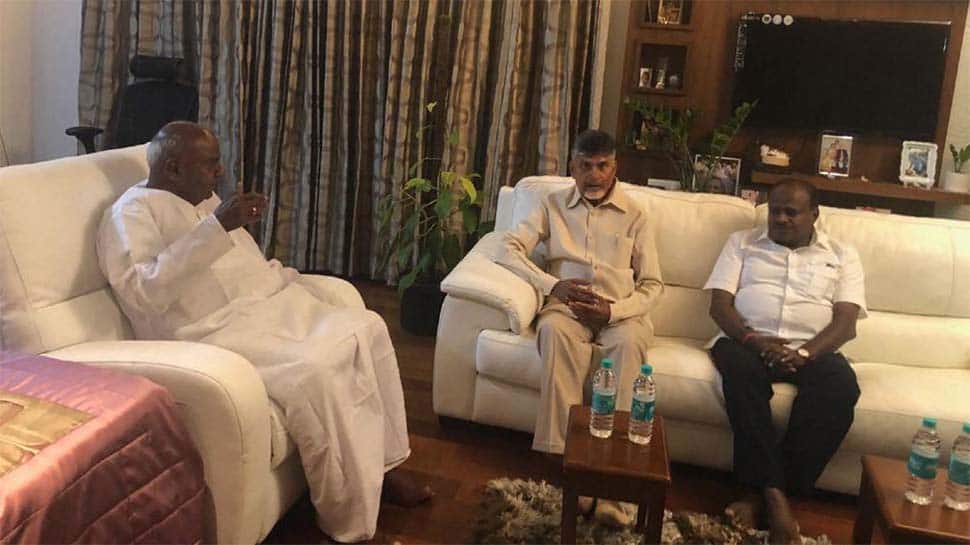 Briefing the media in a joint press conference after the meeting, both the leaders discussed the controversy around alleged manipulation of Electronic Voting Machines (EVMs).

“He (Naidu) raised the issues of the faulty EVMs in the morning and he was of the suggestion that we should go back to paper ballot to avoid these complications. Today me or HD Kumaraswamy couldn't go to Delhi, our representative was there,” said Gowda.

“I have been opposing EVMs since 2009 and said we have to go back to paper ballot,” he added.

Referring to the opposition parties' meet with officials of the Election Commission on Tuesday, Naidu said, “Today we demanded that of the 5 per cent, if there are discrepancies, they should count all.”

In the meeting with EC, a delegation of 22 Opposition has demanded that VVPAT slips at randomly selected five polling booths should be counted first, and if any discrepancy occurs, then VVPAT slips should be tallied for the entire assembly segments. The Opposition leaders also submitted a memorandum to the EC and said that they represented "the voice of 70 per cent of the electorate in the country."

“Even today in UP these news are coming. Former president has also spoken about it. We are asking for that system where the VVPAT slip can be put in the ballot box. Now it's upto the EC,” said the Andhra Pradesh CM.

“All 23 parties are raising the issue. Not just me. Why aren't you counting for transparency and accountability? Earlier even the BJP had opposed to EVMs, Swamy had opposed it. In UP, we are seeing EVMs in hotels and homes. Strong rooms are being changed,” he added.

However, the leaders refused to disclose the agenda of the meeting.

Speaking on grand alliance and anti-BJP front, Naidu says, “We will sit together and discuss on PM candidate after results on 23rd.”

The seven-phase Lok Sabha election 2019 ended on Sunday. Counting of votes will take place on May 23.

Won't bother to read: Roshan Baig after Congress issues showcause notice to him for hitting out at party leadership