The Assembly strength has been reduced to 208 from 225, including a nominated member after Speaker KR Ramesh Kumar disqualified 17 Congress-Janata Dal-Secular rebel legislators. 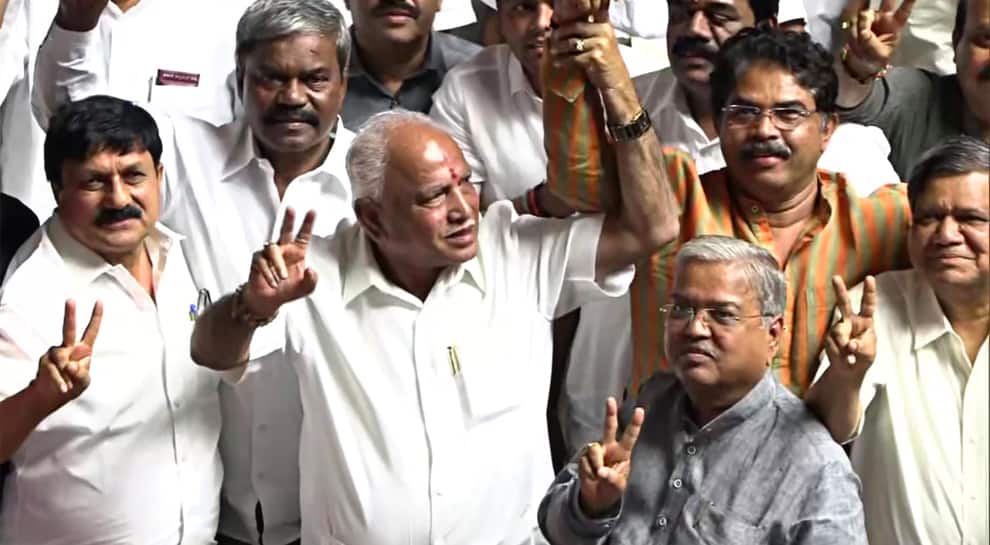 Karnataka Chief Minister BS Yediyurappa will be proving his majority on the floor of the House, three days after taking oath for the top post for the fourth time. BJP has issued a whip to all its 105 legislators to attend the Assembly on Monday from 11 am when the trust vote will be moved by the Chief Minister.

It's advantage BJP in the trust vote after the Assembly strength has been reduced to 208 from 225, including a nominated member after Speaker KR Ramesh Kumar disqualified 17 Congress-Janata Dal-Secular rebel legislators. The new halfway mark for the majority in the House is 104, which the BJP comfortably enjoys.

If Congress legislator B Nagendra, who has been admitted to a private hospital for treatment, and lone Bahujan Samaj Party MLA N Mahesh abstain from the Assembly like they did on July 23, the effective strength for the floor test will be 206.

After the Speaker's decision to disqualify the rebel MLAs, the strength of the Congress has reduced to 64 from 78, excluding the Speaker and that of JDS has come down from 37 to 34.

During the trust vote on July 23 when former chief minister HD Kumaraswamy had to prove his majority, the Assembly strength was 205, with 103 as the half-way mark after 20 legislators - 15 rebels, two sick Congress MLAs, two Independents and the BSP member abstained from voting. As a result, the JDS-Congress coalition lost the trust vote with a combined strength of 99 against 105 of the BJP. On 27 July, Yediyurappa took oath as the Chief Minister succeeding Kumaraswamy, fourteen months after the JDS-Congress government was formed in the state.

The BJP seems to be in a safe spot at least till by-elections are held for the seats vacated by the MLAs. In the bypolls, if BJP wins at least eight seats, it will go past the majority mark of 113 on its own.