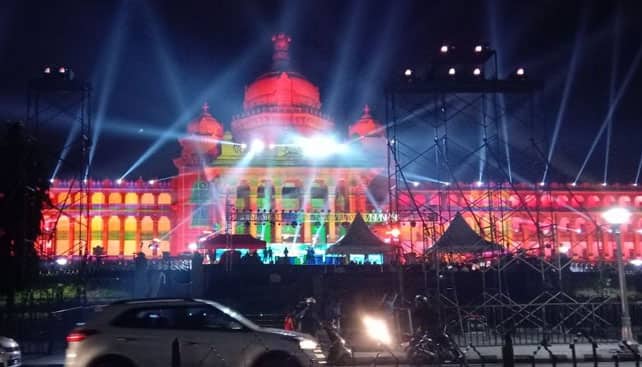 According to ANI, the President is likely to address the special joint sitting of the state assembly in Bengaluru to mark the 60-year anniversary of the Vidhana Soudha.

Ahead of the celebrations, the Karnataka Legislative Assembly has been completely decked up for the event.

Karnataka Legislative Assembly lit up ahead of its 60th year celebration programme. President will take part in the celebrations tomorrow. pic.twitter.com/3uwScjKsCz

On Tuesday, Koliwad announced that the session will be held on October 25.

“We met the President of India and requested him to grace the diamond jubilee celebration and address a special joint session of the state legislature. He has consented for the session to take place on October 25 at 11 am,” Koliwad had old the media.

He said that the joint session of the Assembly will discuss topics including the formation of the Mysore state, integration of Karnataka state and issues related to Karnataka’s history and the Kannada language.

On the occasion, families of the first three chief ministers of the state – KC Reddy, Kengal Hanumanthaiah and Kadidal Manjappa – will be honoured.

The celebration will conclude with a show on '3D mapping of the Vidhana Soudha', the state government said.

Hanumantaiah, in the 1950s, had told a Bengaluru newspaper the reason why he wanted to construct an imposing structure.

“Do you know how I conceived the idea of this building? A Russian cultural delegation was visiting Bangalore and I took them around to show the city. Every now and then they queried, “Have you no architecture of your own? They are all European buildings”.

The structure was designed by BR Manickam in 1950. According to the Karnataka Legislative Assembly website, the project began on July 13 after Prime Minister Jawaharlal Nehru laid the foundation stone.

However, the actual construction began in 1952 and was completed in 1956. It took nearly 5,000 convicts and 1,500 skilled masons and carpenters to construct the massive legislative seat comprising 172 rooms. The entire cost of construction was Rs 1.75 crore.

Two documentaries on the construction of the Vidhana Soudha and emergence of legislature in Karnataka, directed by renowned filmmakers Girish Kasaravalli and TN Seetharam will be screened. Programmes depicting the art and culture of the state will be organised in the evening on the grand steps of the building, the state government said.