Eight Congress and three JDS MLAs have tendered their resignations in Karnataka, prompting both parties to get into a huddle in a bid to save the coalition government. 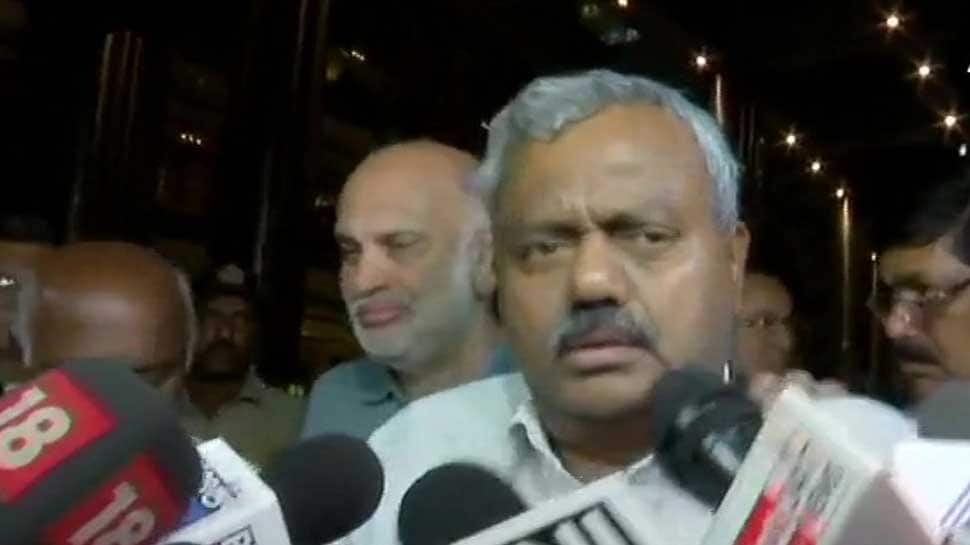 BENGALURU: The political crisis in Karnataka continues as dissident MLAs, who are staying in Sofitel Hotel in Mumbai, on Sunday said that their decision to resign from the Legislative Assembly was final. "We are 10 MLAs here. A total 13 MLAs have submitted resignation to Speaker KR Ramesh Kumar and Governor Vajubhai Bala. We all are together. No question of going back to Bengaluru and withdrawing the resignations," Karnataka Congress MLA ST Somashekar said while speaking to media persons outside the hotel.

In a desperate attempt to save their year-old coalition government from the brink, the ruling Congress and Janata-Dal-Secular (JD-S) allies held parleys on Sunday to pacify their dozen rebel legislators and make them withdraw their resignations.

To continue the coalition government, the allies are also planning to reshuffle the 34-member Cabinet ministry to accommodate some of the rebels by asking a few of the ministers to step down. There are reports that all Karnataka govt ministers from the Congress party have been invited for breakfast by Deputy Chief Minister of Karnataka G Parameshwara, at his residence in Bengaluru, on Monday. There's a possibility that the Deputy CM can ask for their resignations, the sources claimed.

THANKS FOR JOINING US ON ZEE NEWS FOR LIVE UPDATES ON KARNATAKA CRISIS. DO COME AGAIN AT 6 AM ON MONDAY.

All Karnataka govt ministers have been invited at breakfast by Dy CM G Parmeshwar on Monday. There's a possibility that the Dy CM can ask for their resignations, claim source.

All 13 MLAs submitted resignation to the Speaker and informed the Governor. We all are together. No question of going back to Bengaluru and withdrawing the resignations: Karnataka Congress MLA ST Somashekar.

Karnataka Congress MLA ST Somashekar outside Sofitel hotel in Mumbai: We 13 MLAs submitted resignation to the Speaker & informed Governor. We all are together. No question of going back to Bengaluru & withdrawing the resignations. pic.twitter.com/0ae0ttAlgo

Karnataka rebel MLAs are firm on their resignation. They say that it won't be withdrawn.

Naseem Khan, a Congress MLA from Mumbai, was stopped from entering Sofitel hotel where the rebel Karnataka Congress-JD(S) MLAs are staying, earlier today. Khan said, "BJP leaders are allowed to go inside. They're pressurising the MLAs, but I'm not allowed to go".

Today also some MLAs went to Mumbai, they've gone under pressure and they've been told many things. Also, BJP in the state has become active with the help of Centre. Ruling govt at Centre has taken interest to topple this alliance govt. They're trying to get rid of this govt: Kharge.

Govt should run as per Constitution. It is a constitutionally elected govt in Karnataka. They (BJP) are destabilizing it. In about 14 states, they are pressurizing, not only Congress MLAs, but also the regional party members: Mallikarjun Kharge, Congress.

If the coordination committee decides that Siddaramaiah should be the CM, we have no objection. Congress is making efforts to save the govt. They have told the members that some seniors should resign from cabinet & make way for others: GT Devegowda, JDS in Bengaluru.

Some visuals of CM Kumaraswamy arriving at the HAL airport in Bengaluru.

I spoke to H Vishwanath, he told he'll come back. If both the parties decide to make Siddaramaiah as CM or any other from JDS party or from Congress party, I am okay with it: GT Devegowda, JDS.

BJP state unit has booked 30 rooms for two days in Ramada Hotel on Doddaballapur Road in Bengaluru for their MLAs, says ANI.

If my party decides, I am ready to resign. I am not going to BJP. Ours is a coalition government for the betterment of state: GT Devegowda, JDS at party headquarters (JP Bhavan) in Bengaluru.

Karnataka Congress -JDS MLAs meeting inside Mumbai's Sofitel Hotel underway. After the meeting concludes, some of the MLAs may brief media around 8.15 PM, say sources.

Circular has been issued by Congress to all MLAs to attend Congress Legislature Party (CLP) meeting called by CLP leader Siddaramaiah on July 9. Karnataka Congress in charge KC Venugopal & Karnataka Congress chief Dinesh Gundu Rao will also be present in the meet. pic.twitter.com/AurIYewEc7

Karnataka CM HD Kumaraswamy has arrived in India. The CM is expected to reach Bengaluru around 6.30 PM by a special flight from Delhi.

This is nonsense. It's a baseless allegation. By making allegations against another party that has nothing to do with internal affairs of Congress, they're not going to gain anything: Murlidhar Rao, BJP

Congress MLA from Bellary Rural B Nagendra, who is one of the MLAs present at Sofitel hotel in Mumbai, has been called by Congress leaders to Windsor Manor Hotel in Bengaluru.

Maharashtra Youth Congress workers, including its vice-president Suraj Singh Thakur, have been detained by police during their protest outside Sofitel hotel asking Karnataka Congress MLAs to take back their resignation.

Maharashtra Youth Congress workers including its vice-president
Suraj Singh Thakur have been detained by police during their protest outside Sofitel hotel asking #Karnataka Congress MLAs to take back their resignation. pic.twitter.com/qLuXQVSqBF

Our leaders are talking to our legislators who are unhappy. Everything will be okay. BJP is only creating this problem. But the Govt is stable, safe and it will remain safe. All our legislators will come back: HK Patil, Congress

A senior Congress, who is in charge of keeping the flock of legislators together, has blamed party strongman Siddaramaiah for sabotaging the Karnataka government coalition, terming the former chief minister "a thief inside the party". The senior party leader, on condition of anonymity, said Siddaramaiah is "playing games" to wreck the Congress-JD(S) coalition for "his prestige", reported ANI.

A senior Congress leader has blamed Siddaramaiah for the current Karnataka crisis, calls him 'thief inside party', according to ANI.

According to Zee News sources, Mumbai Congress workers will hold a protest march against the undemocratic move of BJP poaching on Cong-JDS MLA's of Karnataka. We won't tolerate 'horse trading' and it looks like democracy is being slaughtered, the Mumbai unit workers of Congress say.

Karnataka CM HD Kumaraswamy is flying to Bengaluru by a special flight from Delhi, reports ANI.

Congress' DK Shivakumar says he is confident of dissenting MLAs reconsidering their resignations.

"They've (JDS) called a meeting of their party leaders. We'll also call our party leaders&sort out this issue. I'm confident things will cool down immediately," he tells ANI.

Sources tell Zee News' Jaipal Sharma that offers of ministerial berths have been made to dissenting MLAs. Some of these MLAs have reportedly agreed to reconsider their resignations.

BJP's Pralhad Joshi reportedly at the Sofitel Hotel where the eight Congress MLAs from Karnataka are staying.

Mahendra Singhi of Congress was also seen at the hotel a short while back. "I only met Ramesh Jarkiholi. I have not met any other MLAs. I won't say anything about what I don't know," he was quoted as saying by news agency ANI.

BJP's Pralhad Joshi says Congress is conspiring against JDS. He adds that the current political developments in the state have been engineered by Siddaramaiah and that Congress is against Deve Gowda, his son and CM HD Kumaraswamy as well as their JDS party.

Former CM  Siddaramaiah has said that the state government faces no threat of collapsing. "Everything is fine. There is no need to worry."

Congress leader Siddaramaiah on political situation in #Karnataka : This clearly shows that BJP is behind all these defections. It is Operation Kamala...Everything is fine. Don't worry. Govt will survive, there is no threat to the govt. pic.twitter.com/3ZjPPj7IS8

A plethora of reasons could have prompted the dissenting MLAs from both Congress and JDS to resign. Full report here.

The eight Congress MLAs who tendered their resignations are currently staying in Mumbai's Sofitel Hotel. It has been learnt that their rooms have been booked until Wednesday (July 10).