3 Lok Sabha seats in Jharkhand to vote in final phase, Shibu Soren in fray from Dumka

Rajmahal, Dumka and Godda Lok Sabha constituencies in Jharkhand will go to polls in seventh phase.

Ranchi: Rajmahal, Dumka and Godda Lok Sabha constituencies in Jharkhand will go to polls in seventh and last phase of national election 2019 on May 19. A total of 4,315 polling booths have been set up to for the election.

Rajmahal and Dumka are Scheduled Tribe (ST) seats, whereas Godda is a General seat. There are a total of 45,64,681 electors in the three constituencies, out of which 23,64,541 are male electors, 22,00,119 female electors and 21 third gender electors. 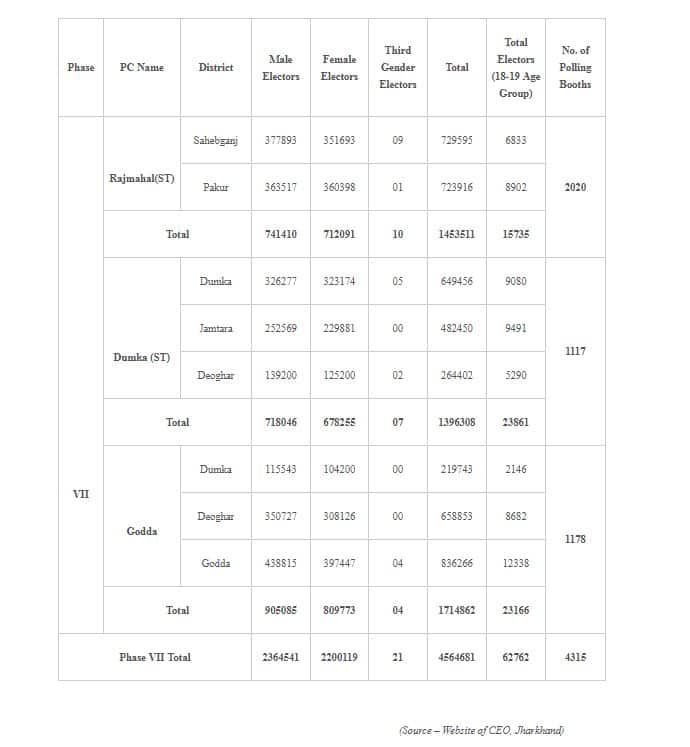 A total of 24 candidates are in the fray from the aforementioned three constituencies going to polls on Sunday. Fourteen candidates are contesting from Rajmahal, 15 from Dumka and 13.

Shibu Soren, the JMM president, is fighting against BJP's Sunil Soren in Dumka. Sitting BJP MP Nishikant Dubey is taking on Jharkhand Vikas Morcha (Prajatantrik) MLA Pradip Yadav, who is backed by the Mahagathbandhan in Godda. The JMM and the Congress are the Mahagathbandhan constituents in Jharkhand.

JMM's sitting MLA Vijay Kumar Hansda is facing BJP's Hemlal Murmu in Rajmahal. Murmu, a former minister, had quit the JMM and joined the BJP in 2014.