After Gujarat, PM Narendra Modi to visit Varanasi on Monday to thank voters

During his Varanasi visit, the PM will thank the voters for "reaffirming their faith" in him and offer prayers at the famous Kashi Vishwanath temple. 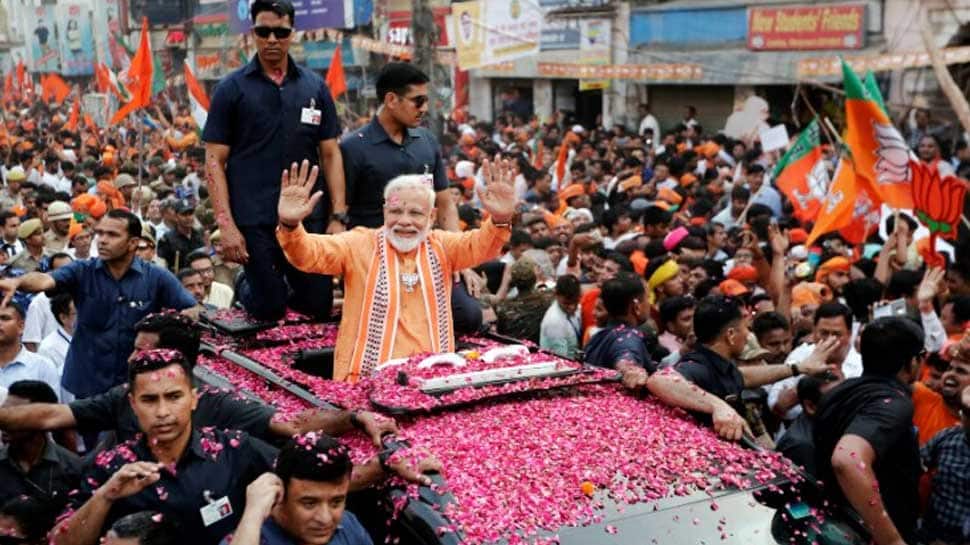 During his Varanasi visit, the PM will thank the voters for "reaffirming their faith" in him and offer prayers at the famous Kashi Vishwanath temple.

PM Modi will travel by road from the police lines to Bansphatak after arriving in Varanasi. From here, his cavalcade will pass through various parts of the city.

After the 'darshan' and 'puja' at the famous temple, the Prime Minister will address BJP workers at Deendayal Hastkala Sankul.

"Will be going to Gujarat Sunday evening, to seek blessings of my mother. A day after that, I will be in Kashi to thank the people of this great land for reposing their faith in me," PM had said in a tweet on Saturday.

In view of PM Modi's visit, heavy security has been put in place to avoid any untoward incident. District Magistrate Surendra Singh along with Senior Superintendent of Police Anand Kulkarni reviewed the security arrangements for PM Modi's visit.

Besides. a large number of paramilitary and special protection group personnel have been deployed in places where PM Modi will be visiting.

According to sources, as many as 12 companies of paramilitary forces have been deployed to ensure foolproof security to the PM.

10 Indian Police Service (IPS) officers, 25 additional Superintendents of Police (SP), 60 deputy SP (DySP) and 200 Inspectors have also been deployed to ensure that there is no lapse in the security arrangements, according to ANI.

The Indian Air Force is also ready with all the security checks in place as PM Modi will be covering the distance from Varanasi Airport to Police line by helicopter.

This will be PM Modi's first visit to his constituency after he won the Lok Sabha election by a huge margin of 4.79 lakh votes.

PM Modi not only retained his seat but also increased his victory margin by almost 1 lakh votes as compared to 2014  polls.

In a video message ahead of May 19 polling, PM Modi had called himself a "Kashivasi" and termed the city his guiding spirit.

Ahead of his Kashi visit, PM Modi visited his home state on Sunday during which he met his mother Heeraben at her Gandhinagar residence and took her blessings.

As PM Modi's convoy arrived at his mother's residence, scores of BJP supporters lined up on the streets to catch a glimpse of their favourite leader. The PM was greeted with thunderous applause and cheering.

Supporters were seen raising slogans in praise of the Prime Minister while holding placards with his pictures.

Security was beefed up during the Prime Minister's visit.

Earlier in the day, PM Modi visited Ahmedabad where he paid tributes at the statue of Sardar Vallabhbhai Patel near the airport.

He later addressed a gathering of BJP workers along with party chief Amit Shah and Chief Minister Vijay Rupani.