DMDK is led by actor-turned-politician Vijayakant and Sudhish told IANS that the party will announce its stand on seat sharing on Thursday or Friday. 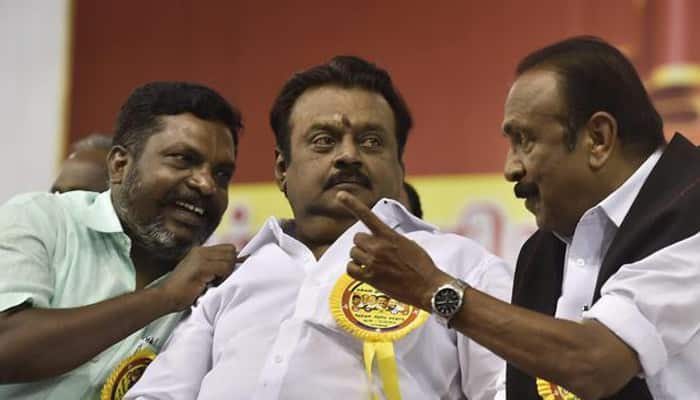 The DMDK leader made the remark hours after AIADMK leader and Tamil Nadu Deputy Chief Minister O. Panneerselvam said the DMDK will join the AIADMK alliance in the upcoming Lok Sabha poll.

DMDK is led by actor-turned-politician Vijayakant and Sudhish told IANS that the party will announce its stand on seat sharing on Thursday or Friday.

Talking to reporters after meeting senior BJP leader and Railways Minister Piyush Goyal, Sudhish said: "We discussed the number of seats and constituencies. As time was short we decided to meet again."

Sudhish expressed confidence that DMDK would forge an alliance with the BJP, which has already aligned with the AIADMK to contest the Lok Sabha election together.

But the DMDK had openly expressed its unhappiness over the AIADMK's decision to include PMK in the alliance and allotting it seven Lok Sabha and one Rajya Sabha seats," Sudhish told IANS.

"(This) is between the two parties (AIADMK and PMK)," Sudhish said, quickly adding: "We know our party`s strength."

Earlirer, Panneerselvam had told reporters that the DMDK will be part of the AIADMK alliance for the Lok Sabha poll which also includes the BJP.

"It is confirmed," the AIADMK leader had said.

Sudhish, however, confirmed that Vijayakant will participate in a rally to be addressed by Prime Minister Narendra Modi in Tamil Nadu during his next visit to the state.