The meeting comes amid the exit polls unanimously suggesting another term for the NDA. 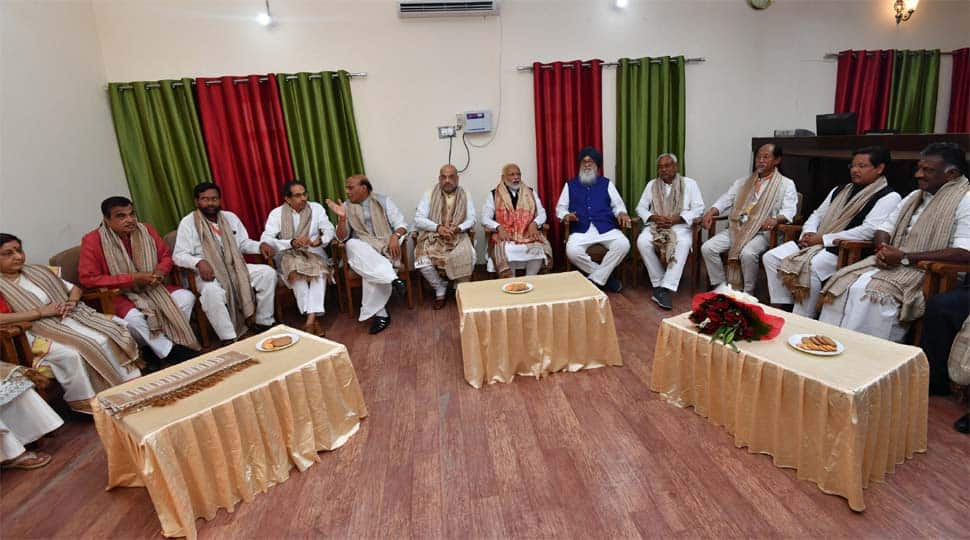 NEW DELHI: Buoyed by the exit polls predicting a clean sweep for the National Democratic Alliance, BJP President Amit Shah is all set to host a dinner for its allies in the national capital on Tuesday. Sources indicate the NDA will chalk out their post-election result strategy in the meet.

Bihar Chief Minister and Janata Dal (United) president Nitish Kumar, Shiv Sena chief Uddhav Thackeray, Lok Janshakti Party head Ram Vilas Paswan and many more NDA leaders are likely to be in attendance in this dinner-cum-meet which will be held at New Delhi's 'The Ashok' hotel.

The meeting comes amid the exit polls unanimously suggesting another term for the NDA. Exit polls telecast by almost all major new channels have forecast that the BJP-led NDA will cross the majority mark of 272 in the 543-member Lok Sabha.

Elections for 542 seats in the Lok Sabha were held between April 11 and May 19. The counting of votes is scheduled for May 23.

Meanwhile, a nervy opposition reached out to one another holding talks for a third front. Andhra Pradesh chief minister Chandrababu Naidu was one of the most active of all non-NDA political leaders, holding parleys with West Bengal CM Mamata Banerjee. SP chief Akhilesh Yadav is also learned to have reached out to Mamata and Bahujan Samaj Party chief Mayawati. Leaders of Congress, SP, BSP and RJD are expected to join the opposition delegation that will meet EC officials at 3 pm on Tuesday.

Several exit polls predicted that NDA would cross the 300-seat mark. News24-Chanakya predicted 350 seats, AAJTAK/India Today-Axis 339 to 365, News18-IPSOS 336, Times Now-VMR 306, Republic-Jan ki Baat 315 and India TV-CNX said that the NDA would win 300 seats. These exit polls largely predicted the UPA to be limited to between 100 and 130. NewsX/India News-Poll Strata predicted 242 seats for the alliance and gave a maximum of 165 seats to UPA.