Congress and its 'mahamilavati' friends have run the nation with 'hua to hua' mentality: PM Modi

During his speech, the PM also criticised the Opposition for doing politics over his caste. 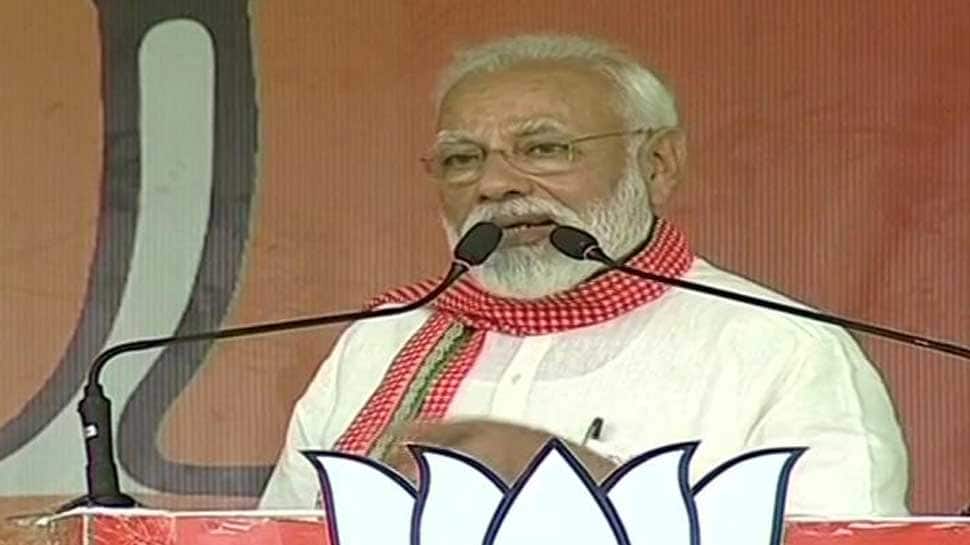 SONBHADRA: Prime Minister Narendra Modi on Saturday made a blistering attack on the Congress-led Opposition, which, he alleged, have run the nation with the mantra of 'hua to hua' (so what, it happened) - in an apparent reference to Congress leader Sam Pitroda's controversial remark on the 1984 anti-Sikh riots for which he later apologised.

''Congress and its 'mahamilavati' friends have run the nation on the basis of three words. The three words, which is their mantra, is 'hua to hua','' the PM said.

PM Modi in Ghazipur: Congress and its 'mahamilavati' friends have run the nation on the basis of three words. The three words, which is their mantra, is "hua to hua". pic.twitter.com/YHHoq2xsZl

The PM came down heavily on Sam Pitroda, the head of Congress party's overseas wing, over his controversial "hua toh hua" (so what, it happened) remark on the 1984 anti-Sikh riots, which backfired with several Sikh groups severely criticising him and demanding an apology from the Congress party.

"It shows the character and mentality of the party," the PM said, adding that the remark reflects the "arrogance" of the Congress.

The PM also urged a vast gathering of BJP supporters not to back the Congress party and the 'mahamilavati' alliance in the ongoing 2019 Lok Sabha polls.

The PM also trained his guns at the previous Congress-led regimes for weakening the country's defence mechanism.

The PM made these remarks while addressing a public meeting in Sonebhadra in eastern Uttar Pradesh.

The PM also took the opportunity to greet the scientists who were behind the success of the nuclear tests conducted in Rajasthan's Pokhran on this day in 1998.

PM Modi also made a reference to the recent gang-rape of a Dalit woman in Alwar and accused the Congress government in Rajasthan of attempting to suppress the case.

''Two weeks ago, a woman from the Dalit community was gang-raped in Alwar, instead of apprehending the culprits, the Rajasthan government and the police started to suppress the case,'' the PM said.

The PM while urging the voter to cast their vote in favour of a strong and decisive government, cited the example of the recent IAF airstrikes in Pakistan's Balakot which targeted terror outfit Jaish-e-Mohammad's training camp and also listed out the achievements of the BJP-led NDA government during the past five years for the welfare of the poor.

During his speech, the PM also criticised the Opposition for doing politics over his caste.

"Modi belongs to just one caste - whatever caste the poor belongs to, I belong to that caste," the PM said.