Talking to ANI, a policewoman said that they were asked to wear the scarves during the roadshow. 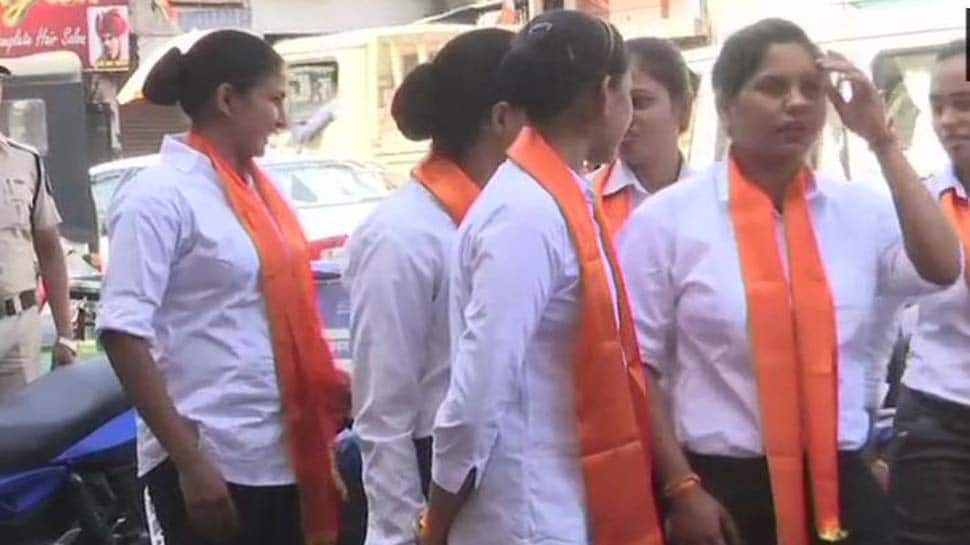 BHOPAL: Controversy hit the roadshow of Digvijaya Singh, Congress candidate from Bhopal Lok Sabha seat, on Wednesday as police personnel on duty in civilian clothes were seen sporting ‘saffron scarves’ around their necks. Talking to ANI, a policewoman said that they were asked to wear the scarves during the roadshow.

Well-known Hindu saint Computer Baba and several other saints accompanied Singh during the roadshow. Singh addressed the public from the top of his vehicle and kept chanting “Bharat Mata ki Jai” and “Hum sab ek hain (We are one)” throughout his roadshow.

The policemen, who were deployed in plain clothes at the roadshow to maintain law and order were seen wearing saffron scarves, which has sparked a row as the men in uniform are supposed to remain apolitical. “We are here on duty for a road show conducted by Computer Baba. We have been made to wear this," a policewoman told ANI.

Bhopal: Police personnel in civil uniform seen wearing saffron scarves at the roadshow of Computer Baba and Digvijay Singh (Congress candidate from the Lok Sabha seat); a policewoman says "we've been made to wear this". #MadhyaPradesh pic.twitter.com/RN8UUN2oMC

However, Bhopal DIG rejected the claims, stressing no police personnel wore scarves of saffron or any other colour. He added that the police force and organisers of the roadshow had enrolled volunteers and the volunteers are free to wear what they want.

In Bhopal, Singh is pitted against Sadhvi Pragya Singh Thakur of BJP. Sadhvi Pragya is still an accused in 2008 Malegaon blast but the BJP has been claiming that she is a victim of the theory of "saffron terror", which was floated by Digvijaya Singh and other Congress leaders. On Tuesday, Singh performed a ‘havan’ along with his wife at Bhopal's Saifia Ground. Computer Baba, originally named Namdeo Das Tyagi and thousands of other saints, also joined Singh during the 'havan''.

Talking about the havan, Computer Baba had said that it was a form of Hathyog that had been organised to pray for the Congress leader's victory in the Lok Sabha poll. The seer, who was appointed the Minister of State (MoS) in Shivraj Singh Chouhan's government in Madhya Pradesh, also lashed out at Prime Minister Narendra Modi for “fooling” the Hindu community by using Ram Mandir as a “political tool.” "BJP has fooled not just the public but the community of seers as well. All sadhus who are with me unanimously say that without a Ram Mandir there will not be a Modi government again," Computer Baba had said.