INKredible India: The story of 1991 Lok Sabha election - All you need to know

A number of events unfolded between 1989 and 1991 which would leave a lasting impact on India. The election of 1991 itself is largely seen in two parts - one before and the other after the assassination of Rajiv Gandhi. 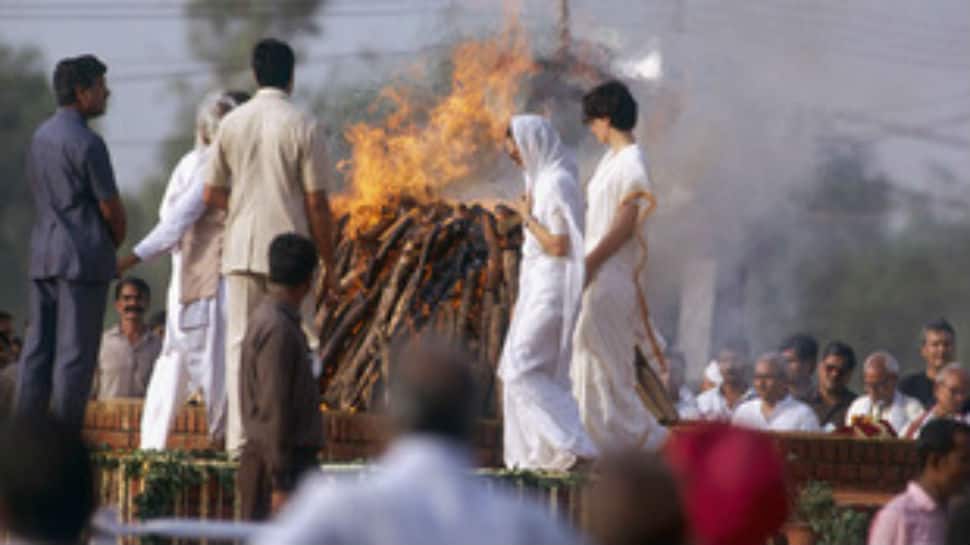 Rajiv Gandhi was assassinated a day after the first phase of voting in 1991. (Photo courtesy: Congress)
Share:
Written By:

The beginning of the 90s was also the beginning of sweeping changes in India that continue to reverberate today. Whether in the economic or in the socio-political sphere, the decade defined how the country approached the turn of the millennium and moved forward from there. Much like around the world, where the prevalent systems were changing – the all-too-recent collapse of Berlin Wall, the collapse of Soviet Union and the end of Cold War and rapid technological advancements had deep-rooted ramifications – India too witnessed dramatic developments with positive as well as negative implications.

India in the first four decades since Independence had grappled with a number of social and economic complexities even as Congress had remained the prime political force. The question of being self-sustainable, of following a non-aligned path on foreign policy and economic development, of even the basic need of feeding its population had been predominant issues of debate and discussion. It was not until the dawn of the 1990s that the country began to see visions – although blurry – of being a power to reckon with on the global stage. True, the menace of poverty, illiteracy, lacking healthcare, etc were still big issues, but Indians at large believed that they could tide over such challenges and dare to dream big. Millennials, in particular, would mostly swear by  the explosive changes they witnessed as children which set the tone for bigger, quicker and even more powerful changes in the time to come.

And all of this happened despite the country ushering in the 1990s with massive reservation-related unrest and the tragic news of yet another assassination, this time of former Prime Minister Rajiv Gandhi.

The political climate of the country by the turn of the decade was as charged as ever. VP Singh, a Cabinet minister in the Congress government till the late 80s, had not only had a fallout with Rajiv but had managed to upstage him in the 1989 Lok Sabha elections. For only the second time in the country’s history, a non-Congress leader had become the face of India. But it is also a face that launched a thousand protests, metaphorically.

The issue of reservation was definitely the biggest polarising factor in India by the turn of the decade. And front and centre in the heated debate on reservation was the report submitted by the Mandal Commission. Although established a decade earlier – in 1979 – to pinpoint socially and educationally backward classes in India, the report was taken up by PM VP Singh, who then tried to implement the recommendations it made.

If only he knew he had stirred a hornet’s nest.

The Mandal Commission’s extensive report, in brief, recommended providing reservation of 27 per cent to people belonging to the OBC category in government jobs and educational institutions. This was in addition to the reservation of 22.5 per cent already in place for people from SC and ST categories. Those in agreement argued that reservation was the only way to right the wrongs done over the centuries to the oppressed. Those vehemently against it argued that merit was being pushed down and opportunities are being given or snatched based on the basis of birth. They also debated that the reservation would end up benefiting only the so-called ‘creamy layer’ of the oppressed communities and not the intended downtrodden. Then there was the point about how the Mandal Commission had reached its conclusions, with accusations of it being mythical and without an empirical basis.

While it is generally agreed that the unrest that followed was far more prevalent in the northern part of the country than in the south, it was nonetheless severe. Countless clashes erupted in 1990, with students leading the protests. On September 19 of 1990, Rajiv Goswami – a Delhi University student – set himself on fire to protest the implementation of the Mandal Commission recommendations. This was a catalyst for many others to attempt the same and it is estimated that close to 200 students attempted self-immolation in the weeks and months after.

The loud and often violent protests would eventually become not just the biggest challenge for the VP Singh government but also its biggest blemish.

Ram Temple, the BJP and fall of VP Singh as PM

The 1980s had seen the Bharatiya Janata Party go from winning just two seats in the 1984 Lok Sabha election to securing 85 in 1989, and giving outside support to VP Singh’s Janata Dal-led National Front government. This would not be the last time the BJP would find itself on the same side as the Left, which also supported the government from outside.

The 1980s had also seen the BJP becoming the face of Ram Janmabhoomi agitation, which wanted a Ram Temple at the sit on which the Babri Masjid stood in Ayodhya. With each passing year, the BJP became even more emboldened in achieving this objective. As BJP president, LK Advani led a tour across a large part of India in 1990, to galvanise people in favour of building the Ram Mandir, and in favour of demolishing the Babri Masjid. En route Ayodhya, Advani was arrested in Samastipur in Bihar on October 30 and this eventually led to BJP pulling the rug from under VP Singh.

VP Singh lost the vote of no-confidence in Parliament and resigned on November 7.

Chandra Shekhar pounced on the opportunity and walked out of Janata Dal with his supporters. He formed Janata Dal (Socialist) and, with the support of Congress, formed the government. He would only remain in the office of Prime Minister for just seven months before Rajiv Gandhi pulled back to support and cleared the way for a fresh election.

The assassination of Rajiv Gandhi

If 1990 was the year of violent voices of protest and cunning political manoeuvrings, 1991 muted the country into shock disbelief. Rajiv Gandhi may have paved the way for fresh election but it was in one of his campaigns for it that he would pay the ultimate price.

Rajiv Gandhi would meet a tragic end due to certain international policies and operations he had undertaken as PM in the 1980s. The decision to send units of the Indian Army as the Indian Peace Keeping Force (IPKF) to Sri Lankan in 1987 – which eventually led to Indian soldiers trying to establish peace by taking on Liberation Tigers of Tamil Eelam (LTTE) – was the direct and unfortunate trigger.

LTTE had been the biggest of several militant groups in Sri Lanka trying to establish a separate Tamil-majority country carved out of Sri Lanka. A civil war had fractured the island nation while India had to not only handle a refugee crisis but also deal with sentiments of Indian Tamils which were mostly sympathetic towards Sri Lankan Tamils taking on the majority Sinhalese. And while the IPKF was initially dispatched not to take role in direct combat but to broker peace, the ground situation soon became hell hot. The LTTE’s anger was compounded by the Rajiv’s decision to overturn the policy that India had followed till that point. For years, especially under Indira Gandhi, it was the Indian government that had provided training to the LTTE on Indian soil.

While the IPKF would eventually withdraw when VP Singh replaced Rajiv Gandhi as the Indian PM, the LTTE reportedly maintained a deep grudge against Rajiv which culminated in his assassination at an election rally in Sriperumbudur, outside Chennai (Madras at the time). On May 21, Rajiv Gandhi reached Sriperumbudur after a number of campaign-related stops through the day. Here, he was greeted by a well-wishers who garlanded around him. Among them was an LTTE woman suicide bomber – Dhanu – who approached Rajiv and while bending to touch his feet, detonated an RDX belt under her dress. She, Rajiv and 14 others died, leaving India and the world stunned and shattered.

By May 21, the first round of polling had already taken place. The two remaining rounds were postponed to June and a minority government led by Congress’s PV Narasimha Rao would take power.

The Lok Sabha 1991 election was conducted across 30 states and union territories. These were:

The election was not held in J&K (insurgency-related problems) and in Punjab.

There were nine national parties and 26 state parties which contested the 1991 Lok Sabha election. There were another 109 registered (unrecognised) parties at the time.

Peasants and Workers Party of India

The Lok Sabha election of 1991 may well be categorised, assessed and analysed as two sub-elections – one before May 21 and the other after.

Over 500 million eligible voters were once again given the chance to elect their government after Chandra Shekhar’s shaky stay in the Prime Minister’s chair gave way. Of these, 52.6 per cent were men and the remaining 47.4 per cent were women.

Why the election of 1991 can be categorised into two sub-election is because how the country voted before and after the assassination of Rajiv Gandhi. As mentioned previously, Rajiv was assassinated a day after the first round of polling. Congress had mostly failed to make a deep impact in the first round held on May 20. A swing of votes by 5.7% away from Congress turned into a swing in favour of the party by 1.6% by the second round of voting. Voter turnout also saw a noticeable rise between the first round in May and the second and third round held in June. The difference in voting between the two sub-elections can simplistically be summed up this way: Congress was almost wiped out in the first phase, and rode a massive sympathy wave to sweep the second phase.

Congress made the most of the sympathy wave to secure wins in 244 of the 545 seats. While he had not contested in the election and had nearly retired, PV Narasimha Rao contested in a by-election in Nandyal which he won by a record five lakh votes. The assassination of Rajiv had necessitated the elevation of Rao and he would be the second Congress PM – after Lal Bahadur Shastri - who did not belong to the Gandhi family. He was also the first PM hailing from the southern part of the country.

While it has been reported that there were others within Congress who had been eying a promotion, Rao’s name was eventually picked to lead a minority government.

Another significant development courtesy the Lok Sabha election of 1991 was the continuing rise of the BJP. The party had chosen to fight the election on its own merit – barring an alliance with the Shiv Sena in Maharashtra – and won 119 seats, up from 85 in 1989. The vote share also saw a significant jump to around 20%, from 11% in 1989.

With a fractured opposition and in the aftermath of Rajiv Gandhi’s assassination, the Indian political system had well and truly set off on the path of coalitions. Regional parties continued to gain in strength but just enough to have a say in the national scheme of things. And in the national scheme of things, vital developments – economic reforms and Babri Masjid demolition to name a few – were to come up shortly after.