India will vote in seven phases starting April 11 and concluding on May 23 with the declaration of the results. 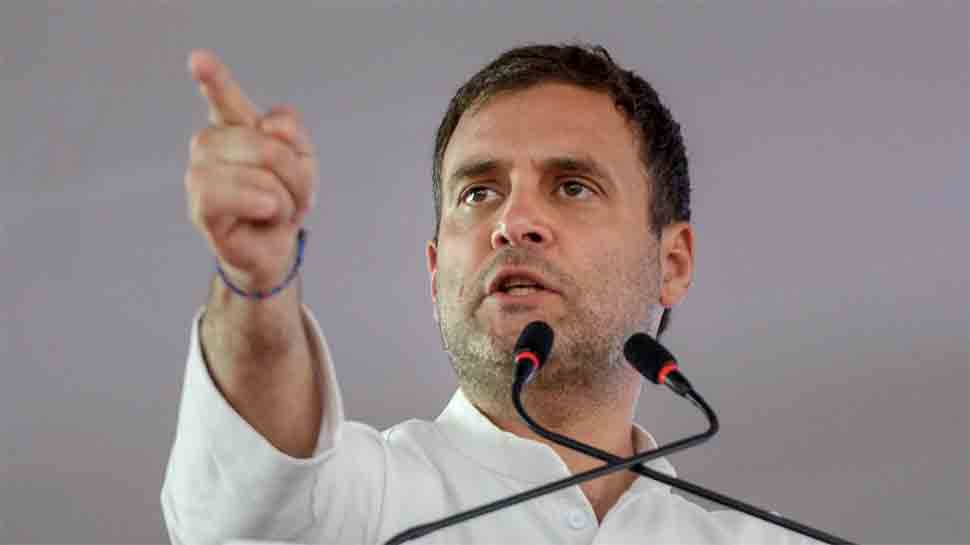 New Delhi: The battleground for the high-pitched Lok Sabha election gets a clear picture with the announcement of candidates' names by the political parties whose performance will determine the final outcome of the polls.

India will vote in seven phases starting April 11 and concluding on May 23 with the declaration of the results.

Here are the updates from Friday (April 5):

* A criminal defamation case registered against Rahul Gandhi and Sitaram Yechuri by RSS activist Dhrutiman Joshi in a Mumbai court. Next date of hearing is April 22. Rahul was exempted from appearing today, though his lawyer argued that they haven't received summons. Sitaram Yechury's address has changed so summons will be re-issued to him.

* Congress releases a list of one candidate in Jharkhand and four candidates from Odisha legislative assembly for the ensuing Lok Sabha election.

Congress party releases list of 1 candidate in Jharkhand for #LokSabhaElections2019 and 4 candidates for elections to the state legislative assembly of Odisha. pic.twitter.com/nu2uqXhhgm

* The BJP's manifesto is likely to be released on April 8 in the presence of Prime Minister Narendra Modi, Amit Shah, Rajnath Singh and others, sources said.

I have seen your pain, I have seen the suffering of the middle class! I assure free healthcare for everyone earning less than Rs.5,00,000 per year! #YSRCPUniversalHealthCard pic.twitter.com/SUVlO7EV3E

1. Any individual with an annual income of up to Rs. 5,00,000 can avail this card and its benefits. Lakhs of individuals from poor and middle-class families to benefit from this and to be given Universal Health Cards to avail medical services for free.

2. Taking YSR's vision of Arogyasri forward, the Universal Health Cards will be applicable for any medical expense over Rs. 1,000.

3. The Universal Health Card scheme to be personally monitored by YS Jaganmohan Reddy.

* Shivpal Yadav releases manifesto for Pragatisheel Samajwadi Party (Lohia) for the upcoming Lok Sabha election. The manifesto promises setting up a commission for farmers, industrial reforms and working for the security and honour of the minorities, among others.

BJP President Amit Shah in Morigaon, Assam: 'Mauni baba' Manmohan Singh was the Prime Minister for 10 years. He went to the Rajya Sabha via Assam. I would like to ask Rahul Gandhi, you speak loudly from stage, why don't you give an account for your 10 years of governance. pic.twitter.com/BUayhvRJVr

* Vivek Oberoi to be the star campaigner for BJP in Gujarat for the upcoming Lok Sabha election. Read full report

BJP releases list of star campaigners in Gujarat for #LokSabhaElections2019 and by-election in the state. Actor Vivek Oberoi is also included in the list. The 26 Parliamentary constituencies of the state will undergo polling in the third phase of elections on 23rd April. pic.twitter.com/PC5lKcD3mp

* None of these false promises will work this time. In this election, may all the other parties join and form an alliance but they won't be able to gain the trust of voters. The promises which were made to poor, labourers, women, youth and Dalits, during the time of election, the government did not fulfil even one-fourth of it: Mayawati

* In the last Lok Sabha election, various publicity tactics were adopted by the parties to woo the voters due to which a lot of money of taxpayers was wasted: Mayawati

* After Independence, the country has been ruled by mostly Congress and for some time BJP. Due to its wrong policies, Congress was shown the door from the Centre and several states. BJP too will go out of power this time because of its RSS-like policies: Mayawati

* Congress General Secretary for UP east Priyanka Gandhi Vadra and party's candidate from the Parliamentary constituency Dolly Sharma hold a roadshow in Ghaziabad.

* From Congress' manifesto, you can understand, who they are with. Their manifesto has been prepared to please the 'Tukde Tukde' gang and Pakistan: PM Modi

* The chargesheet in AgustaWestland mentioned 'AP' and 'FAM' which clearly meant Ahmed Patel and 'Family', PM Modi said in Dehradun, in a scathing attack on Congress.

* Congress, which ruled the country for 60 years, is a supporter of 'Tukde Tukde' gang. Congress' friends and allies are demanding to have a separate Prime Minister for Jammu and Kashmir. Their intention is clear that they want to divide the nation. But their evil intention will not be fulfilled: PM Modi

* Corruption is prevailing in the entire Gandhi family. Congress leader Ahmed Patel was named in AgustaWestland chargesheet. Everyone knows Ahmed Patel is close to which family. Role of Gandhis has been exposed: PM Modi in Dehradun

* My vision for Andhra Pradesh — transparent, technology-driven, corruption-free, decentralised government, at your doorstep; with sustainable development; to be a forerunner state in the country, says YS Jagan Mohan Reddy

* Speaking at a rally in Dhubri, the Trinamool Congress chief took digs galore at the BJP and said that the Citizenship Amendment Bill is against the will of the common man. Read full report

* In the last four years, 300-km highway has been built in Manipur. Five helipads have been built under the UDAN scheme in the state by the Modi government. The government has also started work on the expansion of Imphal airport and air cargo terminal: Amit Shah in Manipur

* Lok Sabha Speaker and sitting BJP MP from Indore Sumitra Mahajan on Friday confirmed that she will not contest the 2019 general election. She has been an eight-time MP from Indore since 1989. Read full report

* Replying to terrorists in their own language is not being liked by some people. When India hits back at the enemy, some people here start crying. When Pakistan is being exposed in front of the world these people start speaking in support of Pakistan: PM

* I would like to thank the Government of UAE and people of UAE for honouring me with the Zayed medal. This is not an award given to Modi but to the Indian people: PM Modi in Amroha

* Got courage through experience: Rahul Gandhi tells students in Pune

* Congress poll manifesto made after speaking to all stakeholders: Rahul Gandhi

* I stand up for the weak: Rahul Gandhi on sister Priyanka calling him courageous

* For the first time BJP is contesting all assembly seats in Arunachal; our winning streak began when three BJP MLAs were elected uncontested: Amit Shah

* PM Modi instructed ministers to visit northeast every fortnight; it was done to resolve problems in the region: Amit Shah in Arunachal Pradesh

* Police seized liquor worth Rs 50,000 from the residence of one K Venkat Rao in Moguluru of Andhra Pradesh's Krishna district. A case has been filed and the man has been taken into custody. Further investigation is on.

* Andhra Pradesh Chief Minister N Chandrababu Naidu to sit on protest in Vijayawada over reported IT raids on TDP candidates and supporters.

* Nirav Modi, Vijay Mallya and Mehul Choksi didn't leave India till Congress govt was here. When they saw that this government has gone out of power and a new 'chowkidaar' has come, a 'chokkana' (alert) chowkidar, they fled away from India to other countries: Union Home Minister Rajnath Singh in Bulandshahr

* Congress president Rahul Gandhi in Maharashtra's Nagpur says, "After the election, there will be an inquiry, the 'chowkidaar' will go to jail".

* BJP president Amit Shah will campaign in Assam, Arunachal and Manipur. He will address his first public meeting for the day at 9:30 am at General Ground, Bordumsa in Changlang district of Arunachal Pradesh. Shah will address a rally at Wangjing Kodompokpi Lampak in Thoubal district of Manipur at around 12:30 pm. He will then head to Manipur where he will address another public gathering at Ahatguri Kahjuj playground at Jagiroad in Morigaon district.

* Congress General Secretary of Uttar Pradesh East Priyanka Gandhi Vadra will hold a road show in support of party candidate Dolly Sharma in Ghaziabad. The roadshow will begin after Darshan in Dudheshwar Temple at 3 pm.

* Prime Minister Narendra Modi will address rallies at Amroha and Saharanpur in Uttar Pradesh and at Dehradun in Uttarakhand. Leaving no stone unturned for party campaigning in West Uttar Pradesh, he is set to address a rally at Nanota town in Saharanpur district. At Amroha, the Prime Minister will campaign for the second phase of the Lok Sabha election. He will also address a rally in Dehradun.