Shiv Sena might be wearing bangles, not us: Devendra Fadnavis over AIMIM leader Waris Pathan's remark

Fadnavis was addressing protestors at Azad Maidan where BJP launched a protest against the Maharashtra government over issues related to farmers and women. 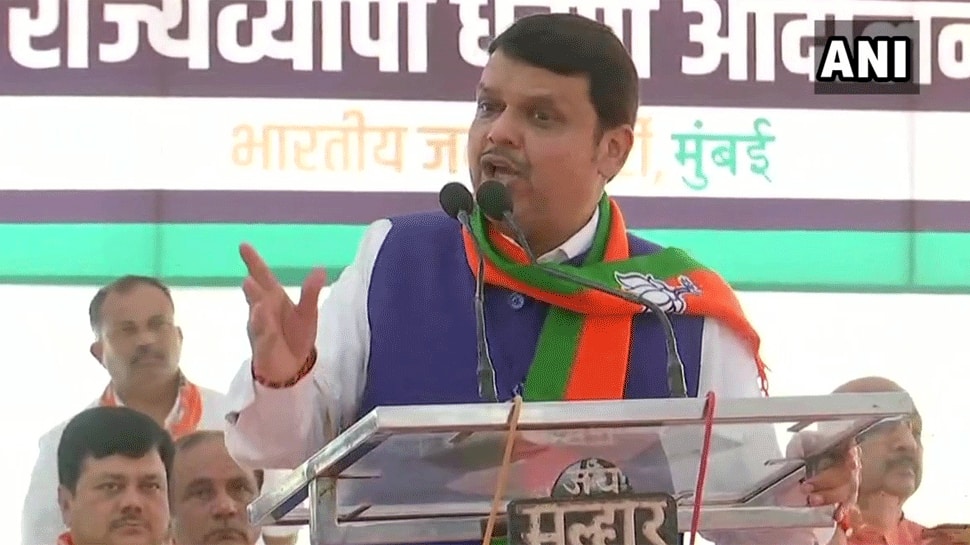 MUMBAI: Targeting Shiv Sena`s silence over the recent controversial remark by AIMIM leader Waris Pathan, former Maharashtra Chief Minister Devendra Fadnavis on Tuesday said that the Uddhav Thackeray-led party might be "wearing bangles" but the BJP was not and knew how to retaliate in the same manner.

"Shiv Sena might be wearing bangles but we are not. If someone says something then he will be given an answer in the same way. BJP has this much power," Fadnavis said while launching a scathing attack on ruling-Shiv Sena in Maharashtra for not taking strict action against Pathan.

Fadnavis was addressing protestors at Azad Maidan where BJP launched a protest against the Maharashtra government over issues related to farmers and women.

On February 20, while addressing an anti-CAA rally, at Kalaburagi in Karnataka, Pathan had said, "time has now come for us to unite and achieve freedom. Remember we are 15 crore but can dominate over 100 crores."

"They tell us that we have kept our women in the front - only the lionesses have come out and you are already sweating. You can understand what would happen if all of us come together," he had said.

Facing flak over his remarks Pathan later took back his words and had said he had not targeted any community but had spoken against members of some organisations.

"If any of my words have hurt someone, I take them back as I am a true Indian," Pathan said at a press conference here.

The AIMIM leader said that he was being portrayed as being anti-Indian and anti-Hindu for the past couple of days.

"I want to say that my earlier statement was basically against people who are members of organisations like RSS, BJP, Bajrang Dal, etc. These 100 are those people who want to divide this beautiful nation," he added.