Those who opposed and ridiculed abrogation of Article 370 will not be forgotten: PM Narendra Modi

While campaigning for his party, the PM said that the next week's assembly election is a battle between BJP's "karyashakti" (power of development) and opposition's "swarth shakti" (selfishness). 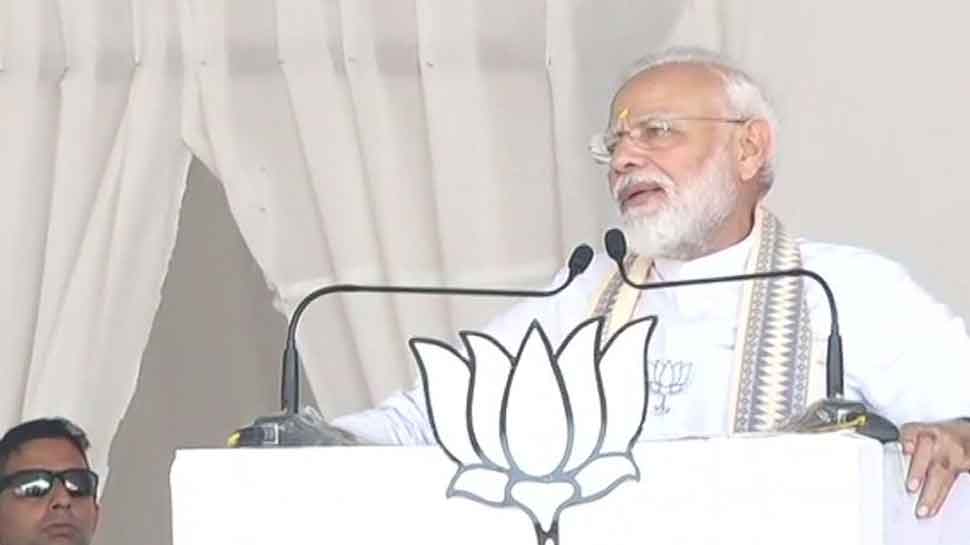 MUMBAI: Prime Minister Narendra Modi on Thursday made a blistering attack on the Congress-led Opposition for questioning the Centre's move to abrogate Article 370 that gave special status to Jammu and Kashmir.

''Whenever Article 370 will be discussed in history, then those who opposed and ridiculed it, their comments will be remembered,'' the PM said.

Prime Minister Narendra Modi in Parli, Maharashtra: Whenever Article 370 will be discussed in history, the decision that was taken in the interest of the country, then the people who opposed and ridiculed it, their comments will be remembered. #MaharashtraAssemblyPolls pic.twitter.com/BG0FcbIP3f

PM Modi made these remarks while addressing a party rally in Parli in Maharashtra's Beed district on Thursday.

While campaigning for his party, the PM said that the next week's assembly election is a battle between BJP's "karyashakti" (power of development) and opposition's "swarth shakti" (selfishness).

Training his guns at the Congress party, the PM said, "A Congress leader had said the decision to abrogate Article 370 will destroy the country. It's been three months, has the country been destroyed?

PM: A Congress leader had said,this decision will destroy the country,it's been 3 months,has the country been destroyed?Another Congress leader said that we've lost Kashmir by abrogating Art370,have we lost Kashmir?If you want to go to Kashmir let me know, I'll make arrangements. https://t.co/9Br8F0Y9HS pic.twitter.com/IY9YvwuY7G

Attacking the Congress party over its stand on Centre's Kashmir move, the PM said, ''A Congress leader had said that had there been Hindus in Kashmir, BJP Government would have never taken this decision (abrogation of Article 370).''

''Do you see 'Hindu-Muslim' in the unity & integrity of the country?'' the PM asked.

''Another Congress leader said that we've lost Kashmir by abrogating Article 370, have we lost Kashmir? If you want to go to Kashmir let me know, I'll make arrangements," PM Modi further said.

During his speech, the PM went on to blast the Congress and NCP leaders and wondered if "frustrated and dejected" people could do anything good for people.

The PM also issued a stern warning to those involved in corruption, saying ''the process of jailing those who looted public money has begun."

PM Modi also expressed confidence that the BJP will break all victory records in the October 21 Maharashtra Assembly elections.

PM Modi had on Wednesday too accused the Congress and the NCP of always speaking against "national interest".

Addressing an election rally in Jalna, he said that while the Congress is "family-centred", the NCP is mired in all types of corruption and both parties have lost all semblance of nationalism.

"Whether it was during the surgical strikes or the Balakot air attacks or the recent abrogation of Article 370 and 35A for Jammu & Kashmir, they have always opposed it and spoken against the country or its national interest," Modi thundered.

He said nobody would dare to speak out against the country, against the army or against our soldiers who sacrifice their lives fighting terror, but the Congress-NCP combine has consistently done this.