The change of guard at the Centre and in the state has not changed anything for senior IAS officer Ashok Khemka, who was on Wednesday once again transferred to an inconsequential posting by the BJP government in Haryana. 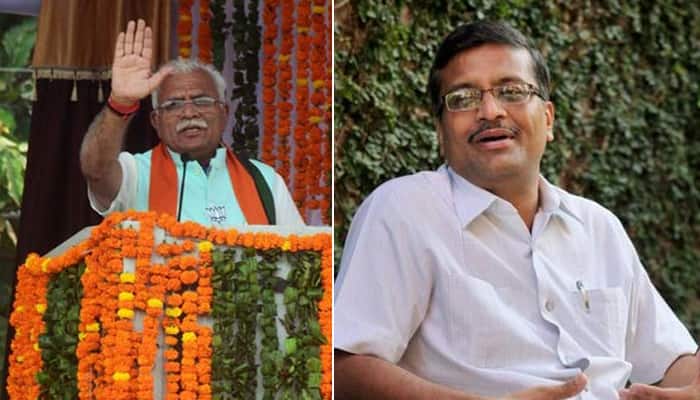 Chandigarh: The change of guard at the Centre and in the state has not changed anything for senior IAS officer Ashok Khemka, who was on Wednesday once again transferred to an inconsequential posting by the BJP government in Haryana.

After the news was reported, Khemka took to microblogging website Twitter to express how painful the moment was for him in the middle of his efforts to address corruption in the transport department where he was currently posted.

Tried hard to address corruption and bring reforms in Transport despite severe limitations and entrenched interests. Moment is truly painful

Meanwhile, Haryana Chief Minister ML Khattar has defended Khemka's transfer while describing him as an honest officer. He stressed that officers are transferred and posted as per needs.

"He's an honest officer. He has been transferred on administrative grounds, it’s a routine transfer," Khattar said. "Depending on the need, officers are transferred. It's a routine process," he added.

However, state's Health Minister Anil Vij came out in Khemka's support, saying he will talk to the Chief Minister regarding the officer "who had worked to weed out corruption during the previous Congress regime".

Vij further told reporters in Ambala, "I will talk to the Chief Minister regarding Khemka's transfer."

Vij, an outspoken BJP leader and Ambala Cantt MLA, said that he had always stood by Khemka, "who had worked to weed out corruption during the previous Congress regime".

Notably, the government did not mention any reason for his transfer. Chief Minister Khattar's OSD Bhupeshwar Dayal termed it as an administrative matter.

Khemka was appointed as transport commissioner and secretary, Transport department, last year after Khattar assumed office as chief minister of the first BJP government in Haryana.

At that time, Khemka, who had blown the lid off from the controversial multi-million-rupee land deals of Congress president Sonia Gandhi's son-in-law Robert Vadra, was touted to get an important assignment. However, he was posted in the transport department.

However, Haryana's Transport Minister Ram Bilas Sharma maintained that "transfer is not a punishment" and stressed that it was a "routine" matter.

"Transfer is not a punishment, a promotion or demotion. Transfer of senior officers is a routine matter. There is nothing special or extraordinary about it," he said while replying to queries on the issue.

He said decisions are taken after the Chief Minister holds consultations with his council of ministers.

Notably, as Transport Commissioner, Khemka had refused to issue fitness certificates to over-sized trucks and trailers for carrying automobiles, leading to a truckers' strike in January.

Later, the truckers in Haryana withdrew their strike after the state government gave them one year's time to get their vehicles modified as per the Central Motor Vehicle Rules (CMVR), 1989.

Khemka, in a tweet then, had said that "60 percent of road accidents due to overloaded and over-sized transport vehicles. Industry cooperation needed to stop this road menace."

The Transport Minister denied that the move to replace Khemka as Transport Commissioner was related to his decision regarding truckers.

"No. Nothing like that. It is a routine matter," he said to a query on the issue.

In one of his tweets last week, Khemka while quoting Rabindranath Tagore had mentioned: "If no one responds to your call, then go your own way alone".

Meanwhile, nine other senior officers were also transferred by the Haryana government.

Among those transferred were SS Dhillon, a former principal secretary to previous chief minister Bhupinder Singh Hooda, who has now been made additional chief secretary, Transport and Civil Aviation Department.

Earlier in 2012, when Khemka was posted as Director-General of Land Consolidation and Land Records-cum-Inspector General of Registration, he had brought land deals of businessman Robert Vadra, son-in-law of Congress chief Sonia Gandhi, under the scanner.

During the Bhupinder Singh Hooda-led Congress government, the official had cancelled the mutation of the multi-crore land deal between Vadra's company Skylight Hospitality Pvt Ltd and DLF, terming it as illegal. However, the previous Hooda government gave clean chit to Vadra in the land deal.

Last week, Khemka in a tweet had said that his action in Vadra-DLF land-licence deal has been "vindicated in the CAG report."

"Undue favours" to builders, including Robert Vadra's Skylight Hospitality, by the Haryana Government during the Congress regime has come under attack from the Comptroller and Auditor General.

DNA: Why was the administration shaken by the death of a rat?