Dr Subhash Chandra, an independent candidate supported by the BJP, scraped through amid political drama during the Rajya Sabha vote count. 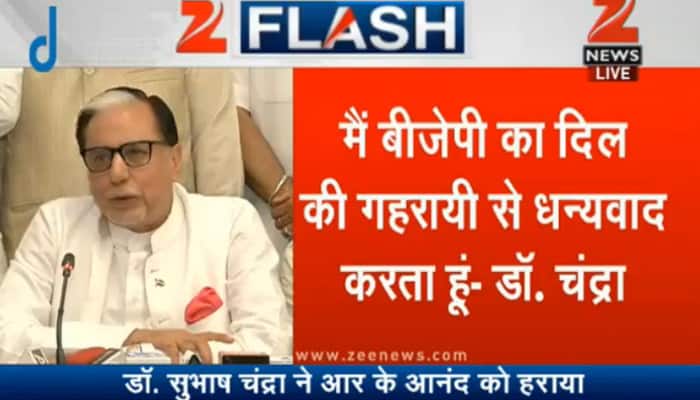 Chandigarh: Essel Group Chairman Dr Subhash Chandra on Saturday expressed his gratitude towards Bharatiya Janata Party (BJP) for supporting him in the Rajya Sabha polls which lead to the media baron's success from Haryana today.

Shortly after marking his victory, Dr Subhash Chandra addressed a press conference here and said he knows how to win a lost battle while adding that 2016 Haryana Rajya Sabha polls was between BJP and rest of the other political parties.

Hitting out at his critics, Dr Chandra said, "I never make big promises without any concrete base. During 2014 Haryana Assembly Elections, I said that I know the secret to win a lost battle and in 2016 Rajya Sabha polls I proved myself." 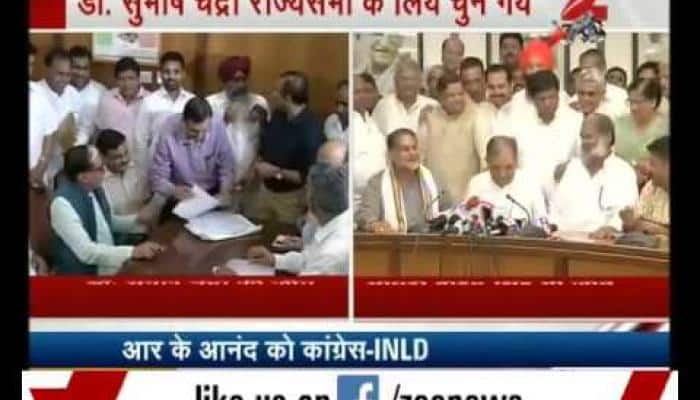 Further disclosing his wining secret, Dr Chandra said, "I personally called-up 76 out of 90 MLAs of Haryana and sought for their support."

The noted philanthropist further expressed his willingness to do something for the betterment of Haryana and its people while assuring that he would raise the issues in the interest of the state during his tenure in the Upper House.

"I would like to thank all 90 legislators (of the Haryana Assembly) and I would like to assure the people of Haryana that during my tenure in Rajya Sabha, I will work towards the betterment of Haryana. I was born and raised in Haryana, but my work took me across the globe. Along with keeping Haryana's interests in mind, I have to also keep the interest of the nation in mind," Dr Chandra told media after his victory was declared.

"Would like to work for Haryana and it's people. After this big win, my responsibilities have also widened. I would also be obliged if provided a chance to work for my fellow citizens of India," Dr Chandra said.

In a scathing attack over those who had speculated that Dr Chandra may win the RS polls by using his money power, the Essel Group Chairman said, "Believe me that they have been proved wrong because I did not spend much money except on accomodation."

"Lot of people have said earlier that Subhash ji has a lot of money and will win elections using money. All those are wrong. My people and I have spent on travelling and staying in Haryana Niwas, other than that I had deposited Rs. 10, 000, which I would get back. So I haven't spent much," he said.

Rebellion by Congress MLAs in Haryana helped BJP-backed Independent candidate Dr Subhash Chandra score a victory​ after at least 14 votes on Congress were rejected in the 90-member assembly.

There was high drama in the assembly complex and counting of votes was delayed for over two hours following objections raised by various parties.

Dr Chandra defeated another independent candidate, Delhi-based lawyer RK Anand, who was supported by the INLD and the Congress. While Dr Chandra got 29 votes, Anand managed only 15.

The Haryana results were to be declared around 5 pm today but the counting process was delayed due to objections raised by the ruling BJP, the opposition Indian National Lok Dal (INLD) and some independents.

After scrutiny, the Election Commission declared 14 Congress votes as invalid - a key factor that led to Dr Chandra's easy victory.

"In today's elections Birender Singh and Subhash Chandra have been declared as winners. A total of 90 votes were polled, one vote was rejected during polls for marking wrongly. Out of the 89 votes, 13 votes were rejected during scrutiny and counting," Assembly Secretary and Returning Officer RK Nandal said.

Nandal further said that all MLAs were clearly informed about the instructions regarding polls, adding that it was mentioned that votes need to be marked only using the violet pen provided by the Returning Officer.

"If any other article is used then the vote is rejected," he added.

"12 votes were rejected as they were marked by unauthorized articles. Out of 14 rejected votes, 12 were due to unathorised makings used, one was blank and another was rejected during polls," he said.

These include 11 seats from Uttar Pradesh, four each from Karnataka and Rajasthan, three from Madhya Pradesh, two each from Haryana and Jharkhand and one from Uttarakhand.