The Aam Aadmi Party (AAP) on Friday made a quick 'U-turn' and removed from its website a banner that read — 'Modi for PM, Arvind for CM'. 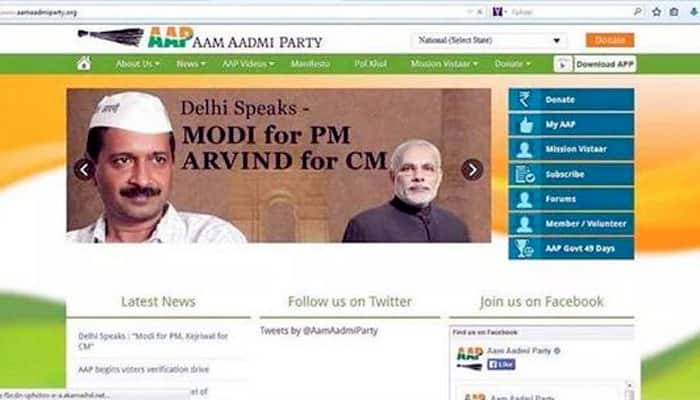 New Delhi: The Aam Aadmi Party (AAP) on Friday made a quick 'U-turn' and removed from its website a banner that read — 'Modi for PM, Arvind for CM'.

The contentious banner was uploaded alongwith a video titled — 'Delhi speaks: Modi for PM, Arvind for CM' — which the AAP proclaimed contained views of Delhiites who had voted for a 'strong PM' (Modi) in the General Elections, but now wanted Arvind Kejriwal as a 'strong chief minister for Delhi'.

The message that followed the video read — "People in Delhi have made up their mind. They wanted a strong PM and elected Modi ji for PM. They want a strong CM in Delhi to fix corruption, price-rise, take tough decisions to improve schools, hospitals, transport issues. They now want Arvind Kejriwal for CM. Please watch the view of the Delhiites. (sic)."

After this banner elicited loud guffaws on social media sites it was quickly removed from AAP's website.

Dilip Pandey, an AAP leader, was quick to admit that the picture had been uploaded 'by mistake.'

But social media users were quick to spot the anomaly and the slogan was lampooned by many on Twitter and Facebook.

Here is how Twitter reacted to the faux pas —

AAP website : Modi is a strong PM.. Nice pitch for a battle between 'NaMo hating AAP bhakts' & 'AAP'.. but that will never happen! #Lulz

Height of shamelessness. After all anti Modi rhetoric, (P)AAP using Modi's pic on their website. {via @Anurag4Bharat} pic.twitter.com/cjYcNtqgRd

Isn't Modi the face of the BJP's campaign in Delhi?What a bizarre,desperate & self-defeating campaign plea from AAP! https://t.co/CBXUs8XIAk

I think next step of Kejriwal to woo Modi voters should be asking Election Commission to allot Modi's face as AAP's symbol.

He couldn't have proved that how extremely foolish a person can be. AAP is making Modi as face of their campaign. pic.twitter.com/nuwyKnXSvL

The UI developer who put 'Modi for PM nd Kejriwal for CM' has beaten his own boss @arvindkejriwal in 'Raita Failao' competition. #UTurnFirSe

In the run up to mid-term assembly polls in Delhi, the political war has heated up. As the BJP looks set to ride the 'Modi wave' in yet another election, the AAP has time and again said that the saffron party lacks a face to challenge its leader Arvind Kejriwal.

"BJP does not have a face. It does not have even a second-rung face let alone a leader who can take on Arvind Kejriwal," AAP leader Yogendra Yadav had said.

The Congress was quick to latch on to this opportunity to take on the AAP. Reacting to the issue, Congress leader Arvinder Singh Lovely said, "I have always said AAP is BJP's 'B team'. Now they have accepted it."

The BJP claimed it was AAP's 'white flag' moment in the run up to polls. "If it's true, it shows they have already accepted defeat," Union minister Prakash Javadekar told ANI.

Gujarat Exit Poll 2022: Which party will get the most seats in Gujarat elections?

DNA: When STD service of telephone started in 1958

Delhi MCD Exit Poll: Which age group of voters voted the most for AAP?