In a major setback to BJP and the Centre, the Supreme Court on Wednesday had ordered restoration of the Congress government in Arunachal Pradesh. 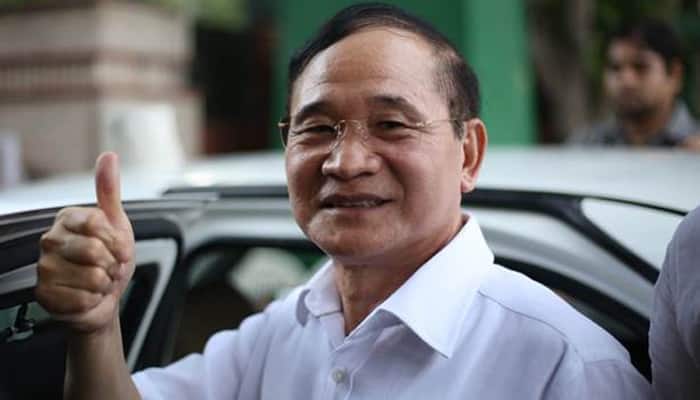 Itanagar/Guwahati: A day after Supreme Court restored Congress government in Arunachal Pradesh, Governor Tathagata Roy on Thursday reinstated Nabam Tuki as Chief Minister and asked him to prove his majority on the floor of the Assembly by July 16.

However, Tuki, who led a Congress government that fell in January, said that he needed time to face the floor test.

Talking to reporters after attending office, Tuki said he would request the Governor to defer the proposed floor test as it is "not possible" within a short span of time.

The Governor in a communique informed Tuki that in obedience to the SC verdict he has been reinstated as CM of the state with effect from yesterday.

"In obedience of the Supreme Court judgement of July 13, the Governor has informed Nabam Tuki that he stands reinstated as the Chief Minister of the state on and with effect from that date," Raj Bhawan Spokesperson Atum Potom said in Itanagar.

In order to ensure that the proceedings of the assembly may take place peacefully and otherwise appropriately, Roy, who is the acting Governor during the absence of Governor JP Rajkhowa, desired that proceedings be video-graphed throughout and the majority proved by division and not by voice vote, Potom said, adding that a note to this effect has also been sent to the Assembly secretary.

"The Governor emphasised that the conduct of the proceedings, including the videography, in the House shall strictly follow the principles laid down by the Hon'ble Supreme Court in its order dated May 6, 2016 in the matter pertaining to the matter of imposition of President's Rule in the State of Uttarakhand (SLP C 11567/2016) Union of India Vs Harish Chandra Singh Rawat," he said, as per IANS.

A note to this effect has also been sent to the Assembly secretariat.

On the other hand, Speaker Nabam Rebia, said the Assembly needs at least 10 to 15 days to summon a session.

"I have received the governor's order asking the state government to go for floor test on July 16 which is practically impossible keeping in mind the uneven topography and inclement weather besides the communication bottlenecks in the state," he told reporters, as per PTI.

The Speaker also appealed to all the Congress members to strengthen Tuki's hands for overall development of the state.

In a major setback to BJP and the Centre, the apex court yesterday had ordered restoration of the Congress government, saying the "clock should be turned back", as it quashed all decisions of Governor Rajkhowa that precipitated its fall in January, holding them "violative" of the Constitution.

Tuki arrived in Itanagar today to a rousing welcome and drove straight to his office from Naharlagun helipad, after assuming charge as CM of the state in New Delhi yesterday. There he convened a meeting with senior bureaucrats including in-charge chief secretary Satya Gopal.

Later, he told reporters that his priority will be to continue all the programmes and policies which were left incomplete before his government was "illegally voted out of power".

"I will continue with my pro-people development initiatives including infrastructure development, road connectivity, skill development and employment generation besides giving special thrust to health, education and security to the people," he said.

Terming yesterday's verdict of the Supreme Court which reinstated him as "historic", he said, "The judgement protected the Constitution of India and is a victory of democracy in the country."

"The (SC) verdict has brought Arunachal to the attention of the entire nation and is good for all the political parties as they are totally protected now," Tuki said, adding it had also clearly defined the powers of a Governor.

Replying to a query on the impending floor test, he emphatically said the majority of the MLAs are in Congress. He also appealed the Congress MLAs to support him to form a stable government in the state as mandated by the people.

The CM added he has no vindictive attitude towards anybody and is in constant touch with all the party MLAs.

"I have talked to all the MLAs, even as BJP is trying to create confusion. Congress is a big party and difference of opinions is not unnatural."

To a question whether he would sacrifice his post if the Congress leadership decides so, Tuki categorically stated that he would abide by whatever decision the party took.

"The party's leadership stood by me even in the worst time," he said.

Kalikho Pul claims to have numbers

Meanwhile, Kalikho Pul, who unseated Tuki, claimed that he is the CM of the state as he has got the numbers to prove majority in the house.

"Even if the apex court has given a verdict, one needs to prove the majority in the floor of the house. As of now I have the support of 43 legislators (including he himself). The 43 includes 30 MLAs of the Peoples Party of Arunachal (PPA), 11 BJP legislators and two Independents. These 43 legislators are with me and we are united," Pul said while addressing a press conference in Guwahati.

He said that Tuki has support of 15 Congress legislators only as of now.

Farmer Protest: Trouble for Delhiites due to farmers’ agitation

Protest: Due to the farmers' movement, Delhi's borders are sealed today