More than a thousand people converged on Hong Kong`s Legislative Council early on Wednesday before lawmakers debate a Beijing-backed electoral reform plan that could trigger fresh protests in the Chinese-controlled city. 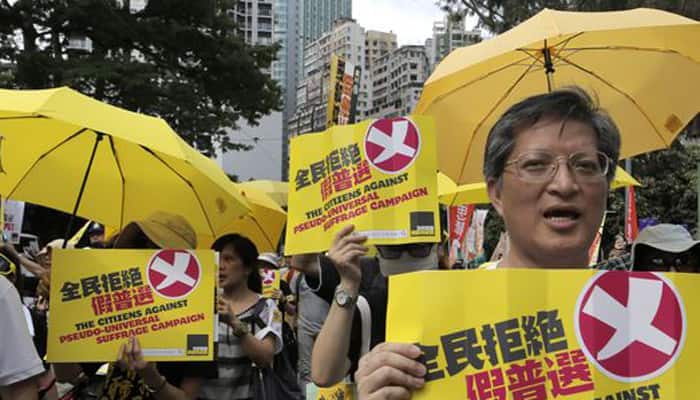 Hong Kong: More than a thousand people converged on Hong Kong`s Legislative Council early on Wednesday before lawmakers debate a Beijing-backed electoral reform plan that could trigger fresh protests in the Chinese-controlled city.

The Legislative Council issued an "amber alert" before the vote on the reform package, which is expected by Friday. The council is due to start the debate at 0300 GMT.

Police were deployed inside the council complex overnight, and police sources said more than 5,000 specially trained officers would be on standby, while some roads leading to government buildings were closed.

Activist groups said they expected 100,000 protesters to show up on Wednesday, although Beijing supporters easily outnumbered opponents of the package early on Wednesday.

Legislators will debate a blueprint that will allow a direct vote for Hong Kong`s next leader in 2017, but only from pre-screened, pro-Beijing candidates. Opponents say they want a genuinely democratic vote.

Some pro-democracy activists were resting in tents close to government headquarters as temperatures hovered around 30 Celsius (86 Fahrenheit).

Hundreds of police stood guard as more than a thousand pro-Beijing supporters gathered, some waving banners that said: "Support the reform".

Tension has been running high, especially after 10 people were arrested this week on suspicion of explosives offences. Six of them have been charged with conspiracy to cause an explosion.

China`s Foreign Ministry said there were "certain people who want to use a series of damaging acts" to disturb the debate but still hoped it could proceed smoothly.

Beijing has tried to lobby Hong Kong`s 27 pro-democracy lawmakers to back the blueprint.

Those democrats, who hold a crucial one-third veto bloc in the 70-seat Legislative Council, have so far pledged to oppose what they call a "fake" democratic model.

Hong Kong`s Independent Commission Against Corruption has also said it is investigating allegations by an unidentified legislator that he was offered a bribe to vote for the package.

Hong Kong returned to China in 1997 under a "one country, two systems" formula that gives it a separate legal system and greater freedoms than the party-ruled mainland - and the promise of universal suffrage.

While flawed, the package is still the most progressive electoral model ever offered by China`s leaders in what might be a pilot for other cities within mainland China, according to a source close to Beijing`s leadership.

If the plan is vetoed, Hong Kong`s next leader will be selected as before by a 1,200-member committee stacked with pro-Beijing loyalists. Beijing would be unlikely to offer any fresh concessions to Hong Kong anytime soon.

Anger over the electoral package has even spilled over to football, with supporters of the Hong Kong team loudly booing the Chinese national anthem on Tuesday at the start of a World Cup Asian zone qualifying match against the Maldives.