Delhi clinched the all-important All-Out with two minutes left in the match to pull open a lead which their defenders helped maintain. 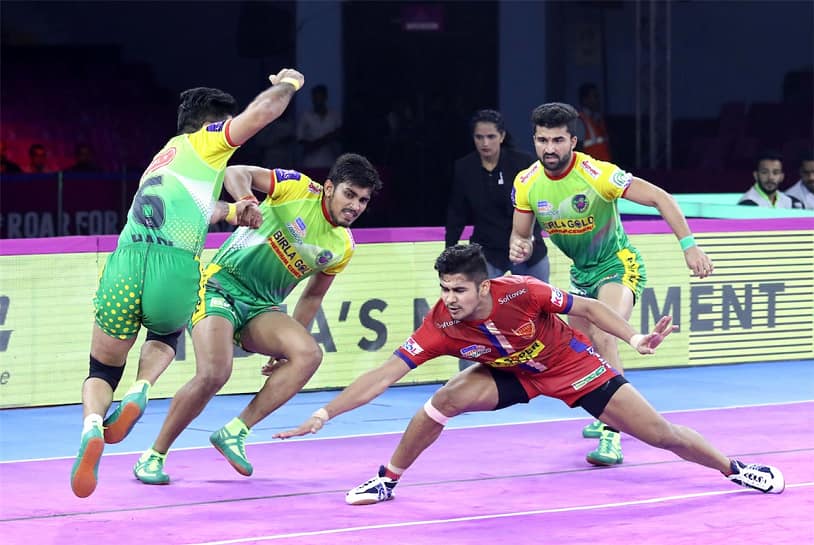 Jaipur: Dabang Delhi KC produced another stellar comeback to beat Patna Pirates 43-39 in a Pro Kabaddi League (PKL) match in front of a packed audience at the Sawai Mansingh Stadium here on Thursday. Naveen Kumar and Vijay secured Super 10s for the Delhi side who move back to the top of the points table after the victory.

Patna will only have themselves to blame for the loss after having dominated the match for the most part. Pardeep Narwal once again impressed with a Super 10 (19 points) for the Pirates but a blunder in the defence by three-time champions Patna allowed Delhi's Vijay to clinch 5 points in a raid and make a comeback in the match.

Considering the quality of raiders on both sides of the mat, it wasn't surprising to see both the defences take a cautious approach in the early minutes of the encounter. When they did try, they failed as Pardeep and Naveen made the match all about themselves.

But Chandan Ranjit, Delhi's secondary raider, picked up important points in the background, and the pressure finally mounted when in the 11th minute Vijay pulled off a stellar block on Patna's Pardeep to sway the balance towards the Delhi side.

Pardeep's time away from the mat is usually the make-or-break factor for the Patna team but despite the star spending a large time away (8 minutes 25 seconds) from the action, the team kept pace with the Delhi side, with Hadi Oshtorak marshalling the defence. The first half ended with no All-Outs and points tied at 13-13.

The Delhi side started the second half with a Super Tackle on Pardeep but that was perhaps their only positive move in the next minutes as Patna unleashed the beast in them.

Quick raids fetched them an All-Out in the fourth minute of the second-half after which Pardeep steamrolled through a hapless Delhi defence. The superstar picked up another Super 10, and a three-point Super Raid in the 8th minute of the half, as Patna pushed for another All-Out.

They got their second All-Out with six minutes remaining to move to a six-point lead. ‘Record breaker' Pardeep also became the first raider to hit 1100 points in PKL history with his efforts.

But Kabaddi is a sport that doesn't allow you to rest on your laurels, and a raid by Delhi's Vijay with slightly more than three minutes left in the match turned things around once again. He secured a bonus point and four touch points to cut down Patna's lead to a single point.

Delhi clinched the all-important All-Out with two minutes left in the match to pull open a lead which their defenders helped maintain.