IPL 2015: Kolkata Knight Riders vs Delhi Daredevils - As it happened...

Delhi Daredevils take on Kolkata Knight Riders in the 17th match of the Indian Premier League at the Feroz Shah Kotla stadium. 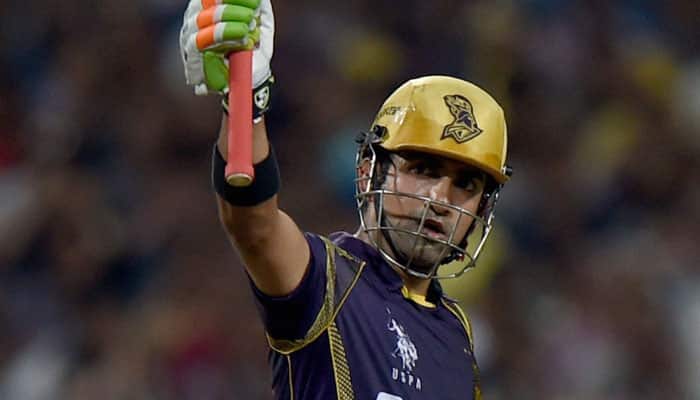 2 needed to win, Mishra to bowl his final over. First ball was angled down the leg side and Doeschate guided it towards fine leg for a couple of runs! KKR win the match by 6 wickets!

Mishra to bowl his third over. 5 from the over.

Coulter-Nile to bowl his final over. 28 needed off 30 now. He began with a fuller delivery and Pathan smacked it past midwicket for a boundary. After two dot balls, both bouncers, he offered room to Pathan off the fourth ball and he slapped it over covers for a boundary. Fifth ball had the slightest of width on offer and Pathan just caressed it past point for another boundary! 12 from the over.

Tahir into his third over, he has been brilliant this season and DD want him to weave some magic. Fifth ball was angling down the leg side and Pathan just timed it past fine leg for a boundary. 8 from the over.

Mathews has been brought back into the attack. He started with a short ball and Gambhir pulled it past square leg for a boundary which also brought his half-century off 38 balls. It's his third fifty of this season. 9 from the over.

Mishra to continue. Mishra bowled a clever googly to Pathan, he didn't read that and it hit him right in front of the wicket, but the umpire wasn't keen about the appeal. Pathan was offered room for the last ball and he hit it powerfully past covers for a boundary. Poor ball to end the over, 6 runs from it.

Yusuf Pathan is the new man in, Amit Mishra has been brought into the attack. He bowled a short one to Yusuf who smashed it past midwicket for a boundary. 9 from the over.

Coulter-Nile has been brought back into the attack. Fourth ball was slightly fuller, Surya slapped it off the backfoot past the fielder at mid-off for a boundary. Surya was looking to turn the last ball towards third man for a single, instead edged it to the keeper! DD have the breakthrough they were looking for! 8 from the over.

Tahir to continue. Surya was offered width off the fourth ball and he hit it over covers for a boundary. 9 from the over.

JP Duminy has come into the attack. Suryakumar stood in the crease for the fifth ball, a fuller delivery and clobbered it straight down the ground for a Six! 10 from his first over.

Imran Tahir has been introduced into the attack. 4 from his first over.

Joseph has been brought back into the attack. Uthappa took a chance off the first ball, but holed it straight to Duminy at mid-off, Domnic strikes! Manish Pandey is the new man in. Domnic offered width to Pandey off the fourth ball, he went after it and hit it straight to Tahir at deep third man, double strike for Domnic! Suryakumar Yadav is the new man in. Domnic bowled a fuller delivery to Gambhir who worked it past deep fine leg for another boundary. 4 from the over and two big wickets for DD!

Coulter-Nile to continue. First ball was full on middle-stump and Uthappa timed it beautifully through midwicket for a boundary. 7 from the over.

Angelo Mathews has been brought into the attack. He bowled one full on leg-stump and Gambhir fllicked it past wide of fine leg for a boundary. Gambhir took a chance off the last ball and cleared mid-on for a consecutive boundary. 11 from the over.

Coulter-Nile to bowl from the other end. 7 from the over. Quiet start for KKR.

Dmonic Muthuswami to bowl the first over, Gambhir, Uthappa to open for KKR. First ball was a length delivery and Uthappa timed it well towards long leg for a boundary. 6 from the first over.

Umesh to bowl his final over. Coulter Nile hit the first ball, a full-toss, straight down the ground for a single. Mathews hit the seond ball towards long-off, they completed a single, Coulter Nile went for the second and by the time he was sent back, Manish Pandey's accurate throw saw him short of the crease. Amit Mishra is the new man in. Mishra got off the mark with a single towards third man. Umesh bowled an excellent yorker to Mathews for no run. He bowled another good short ball to Mathews, for another dot ball. Mathews charged down the wicket off the last ball, got an edge and Uthappa dived to his right to take an excellent catch! Brilliant last over from Umesh Yadav!

Narine to bowl his final over. Coulter Nile is the new man in. First ball was full and Mathews slog-swept it over deep midwicket for a Six! Mathews took a chance off the second ball as well and hammered it over long-on for consecutive Six! Mathews hit the third ball straight down the ground for a couple of runs. Mathews took a single off the fourth ball towards long off. Coulter Nile followed it with another single towards midwicket. Mathews charged down the wicket off the last ball and bisected the gap between midwicket and long-on for another boundary. 20 runs off Narine's final over.

Umesh Yadav brought back into the attack. Kedar made some room off the last ball, Umesh didn't offer him room there and it went straight to Gambhir at point. This has been a brilliant spell from Umesh so far.

Narine to bowl his third over. Narine spun the second ball away from Jadhav, Uthappa appealed but the umpire wasn't interested. Kedar slog swept the fifth ball cleanly past wide of long on for a boundary. Kedar attempted another slog-sweep off the last ball, connected very well as it sailed over deep midwicket for a Six! 12 from the over.

Russell to bowl his third over, Kedar Jadhav is the new man in. Just 2 from the over.

Chawla to bowl his final over. He bowled a short one to Yuvi who pulled it past midwicket for a boundary. Yuvi attempted a sweep off the second ball, missed the line and didn't connect, he was outside his crease as the ball went to the keeper and within a flash, he was stumped! That looked very awkward and we might wonder what was Yuvi thinking there? 7 from the over, big wicket for KKR!

Morkel to bowl his final over. He bowled a short one to Yuvi who slapped it over deep midwicket for a Six! Superb shot that was! He bowled a well-directed bouncer to Tiwary, who holed it straight to Yusuf Pathan at short midwicket. Angelo Mathews is the new man in. 9 from the over. DD need Yuvi and Mathews to bat till the end to reach a formidable score.

Chawla to bowl his third over. Yuvi stood in the crease off the fourth ball and smashed it straight down the ground for a boundary. 6 from the over.

Morkel brought back into the attack. Manoj charged down the wicket off the second ball and hit it between mid-off and covers for a boundary. He bowled a short one to Manoj who slapped it past square leg for another boundary. 9 from the over. Manoj is looking very confident here, that should ease the pressure off Yuvi.

Yusuf Pathan comes into the attack. Manoj saw some width off the first ball and he played a reverse shot past third man for a boundary. 9 from the over.

He bowled a googly to Iyer who went for a slog-sweep and missed the line completely and was bowled! Yuvraj Singh is the new man in. 6 from the over.

Russell to continue. He bowled one at Iyer's leg-stump and he whacked it over wide of long-on for a Six! Top shot that! Russell ended the over with one down the leg side and Iyer once again timed it well past fine leg for another boundary. 11 from the over.

Piyush Chawla has been brought into the attack. Iyer charged down the wicket off the second ball, Chawla saw that and ended up bowling one way down the leg side for 5 wides. 9 from the over.

Andre Russell has been brought into the attack. His third ball was a half-volley and Iyer smashed it over mid-off for a boundary. 8 from the over.

Sunil Narine has been brought into the attack. Duminy went for a sweep off the second ball, missed it as the ball hit his gloves and went on to hit the stumps. Unfortunate dismissal for the DD skipper. 4 from the over. Gambhir has rotated his bowlers extremely well so far.

Morkel to continue. Iyer was offered width off the second ball, he went after it and hit it past backward point for a boundary. Morkel bowled one with a middle-stump line to Iyer, who used the pace and timed it well past midwicket for another boundary.

Yadav to continue. Duminy was offered width off the fifth ball and he timed it well between the gap at cover and point for a boundary. 7 from the over.

Morne Morkel to bowl from the other end. His second ball was a sharp bouncer to Mayank, who was in no position to play the pull he attempted and it went straight towards deep square leg where Umesh Yadav took an excellent catch diving to his front. JP Duminy is the new man in. Excellent start this from Morkel.

Umesh Yadav to bowl the first over, Mayank Agarwal and Shreyas Iyer to open for DD. Good first over from Umesh, just 3 runs off it.

Before the match, the players from both the teams observed a two-minute silence in the memory of young Bengal cricketer Umesh Keshri, who passed away on Monday as a result of an on-field collision.

TOSS: KKR have won the toss and they have decided to bowl first.

After losing two close matches, Daredevils have made a strong comeback this season. They have now registered two wins in a row against Kings XI Punjab and Sunrisers Hyderabad.

JP Duminy has led from the front in most of the matches, and even though some experts aren't much impressed by his leadership, the South African has proved his mettle both with the willow as well as the ball. While Yuvraj Singh and Angelo Mathews have strengthened the middle-order, Delhi are blessed to have two quality youngsters in Mayank Agarwal and Shreyas Iyer at the top of the order.

Mohammed Shami's injury has been a major setback for the team and they need Nathan Coulter Nile to be at his very best in every match since Delhi don't have another quality pacer. Imran Tahir and Amit Mishra have done their jobs extremely well.

KKR on the other hand are a very well balanced squad and have two quality pacers in Morne Morkel and Umesh Yadav.

Robin Uthappa and Sunil Narine are their two key weapons and if they get going, the defending champions can look forward to another great season. Narine has picked just one wicket in the series so far, while Uthappa, who was on a run-scoring spree last year, has had a highest score of 35 from three matches.

DD have lost 8 consecutive matches at their home ground and it would be interesting to see whether they can end their winless streak since they have the momentum now.