With the DMK-led alliance winning a comfortable majority in the state assembly, MK Stalin will now make sincere efforts to establish himself as the new 'Dravidian poster boy and a leader of masses like his charismatic father. 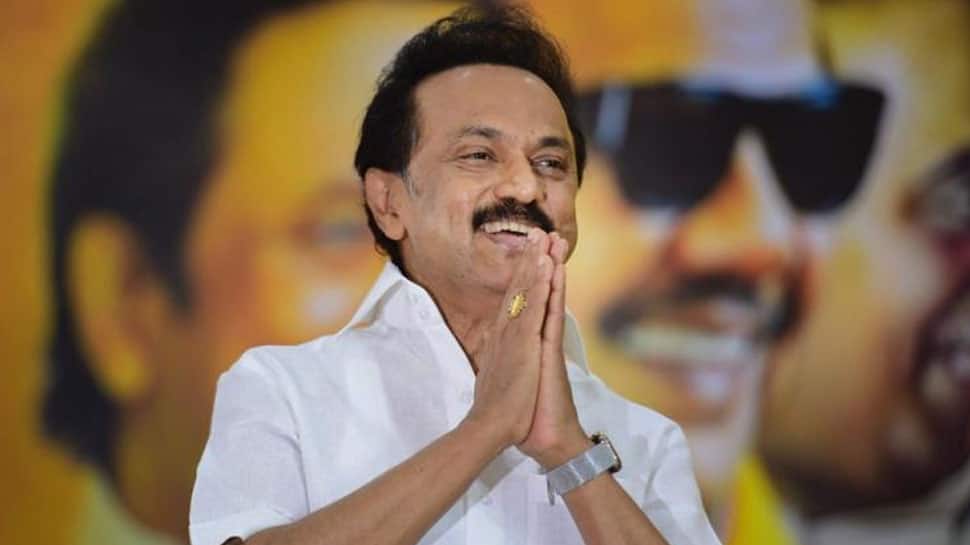 CHENNAI: Dravida Munnetra Kazhagam (DMK) president Muthuvel Karunanidhi Stalin was sworn in as the Chief Minister of Tamil Nadu by Governor Banwari Lal Purohit during a simple ceremony at the Raj Bhawan on Friday. Besides Stalin, the Governor also administered the oath to 33 other lawmakers as the Ministers.

With this, the DMK led by MK Stalin has seized power, after a ten-year gap, for a sixth time in its history by winning the 2021 Assembly elections securing a comfortable majority on its own.

68-year-old Stalin, the man who is now being seen as the face of the 'Dravidian movement', has been trying hard to fit into the shoes of his late iconic father and DMK patriarch M Karunanidhi.

With the DMK-led alliance winning a comfortable majority in the state assembly, MK Stalin will now make sincere efforts to establish himself as the new 'Dravidian poster boy and a leader of masses like his charismatic father.

This is also evident from the fact that soon after taking over as the Chief Minister, Stalin changed his Twitter bio that now reads: "Belongs to the Dravidian stock."

This is an apparent reference to the DMK founder and Dravidian party's first chief minister CN Annadurai's famous Rajya Sabha speech in 1962, during which he proclaimed himself to be of the Dravidian stock and different from the southern leaders of his time.

"I claim Sir, to come from a country, a part in India now, but which I think is of a different stock, not necessarily antagonistic. I belong to the Dravidian stock. I am proud to call myself a Dravidian. That does not mean that I am against a Bengali or a Maharashtrian or a Gujarati. As Robert Burns has stated, ‘A man is a man for all that. I say that I belong to the Dravidian stock and that is only because I consider that the Dravidians have got something concrete, something distinct, something different to offer to the nation at large. Therefore, it is that we want self-determination,” Annadurai had said.

However, after the Chinese aggression in 1962 and the events thereafter, Annadurai dropped his separatism demands. After Annadurai’s death, the baton of the ''Dravidian movement'' was passed on to 'charismatic' M Karunanidhi till his political heir and son Stalin took over the reins of the party.

MK Stalin is also no novice in southern politics since he has canvassed for his father’s party during elections as a teenager and stood witness to the horrors of the Emergency imposed by the then Prime Minister Indira Gandhi.

From quelling rebellion within his party, settling scores with his estranged brother MK Alagiri to finally taking over the reins of the party after his maverick father’s death in August 2018 at the age of 94, MK Stalin has gradually matured in politics.

In 1969, Karunanidhi was elected the DMK president, a post created for him following the death of party founder CN Annadurai and he continued to serve as the party’s undisputed leader for over five decades.

68-year-old Stalin’s rise as the DMK chief heralded a new era in the Dravidian party, making him only the second man after his father to be elected as party president.

Growing under his father's shadow, Stalin, who was known for his flamboyant ways in his younger days, has slowly transformed himself into a mature political leader despite a series of flip-flops and gaffes made by him on various occasions in the past.

Ably aided by Prashant Kishor’s I-PAC ahead of the assembly election in the state, MK Stalin took great effort in rebranding himself as the new icon of the Dravidian ideology. The DMK election campaign was also designed to project BJP as a ''Hindi-belt party'' that is thrusting its authority and the Hindi language upon Tamils.

It is noteworthy how the DMK and its allies kept reminding people about how the Narendra Modi-powered BJP was “insulting” the Tamil language, culture, pride during the entire election campaigning.

Stalin’s election campaign highlighted the alleged attempt made by the BJP to deny the state’s OBC communities their due. The party also succeeded in projecting the AIADMK as a ''proxy'' for the BJP and its ''slave.''

The DMK made the most of Tamil Nadu’s aversion to the saffron party, its ''Hindutva'' ideology, the anti-incumbency factor against the E Palaniswamy government and the colossal fall of Kamal Haasan’s Makkal Needhi Maiam, which saw the party winning 159 of the 234 seats in the state.

After his debacle, it is unlikely the mega film star will have a future in the state’s political landscape. He possibly over pitched himself and the results proved that he can’t hold his own on the electoral field.

The Dravida Munnetra Kazhagam (DMK) has always fashioned itself as a crusader for social justice and Tamilian pride. In this contest, it will be interesting to watch how Stalin handles the massive mandate which his party has got and how he treats the Centre-state relationship.

Having finally realised his dream of being the Chief Minister and considering his Dravidian ideology, it will be interesting to watch how he deals with the NDA regime at the Centre. The DMK has always accused the Narendra Modi-led NDA government of thrusting its federal spirit on the state on several occasions. Hence, it will be keenly watched as to how the new DMK regime at the helm in Tamil Nadu negotiates crucial administrative issues with the Centre.

As a chief minister, Stalin will have to demonstrate a great deal of courage in handling these issues with the Narendra Modi-led NDA government at the Centre. As the DMK chief, he cannot let internal party feud and insecurities overshadow his decisions. In fact, he has already taken a wise decision by not including his son in the cabinet – which otherwise would have dented the credibility of his government and lead to allegations of nepotism.

Among other challenges, Stalin will have to keep the rampant corruption in check since DMK big guns are tasting power after a decade-long. However, his immediate challenge would be to keep the catastrophic second wave of the Coronavirus pandemic in check and ensure the availability of the anti-COVID-19 vaccines and expediting the vaccination drive.