Hyderabad man claims to have collection of 19,022 Lord Ganesha idols

The man also claims to have a wide collection of 20,426 photographs, 1,098 posters, 200 Ganesha key-chains and 201 audio/video cassettes on Lord Ganesha. 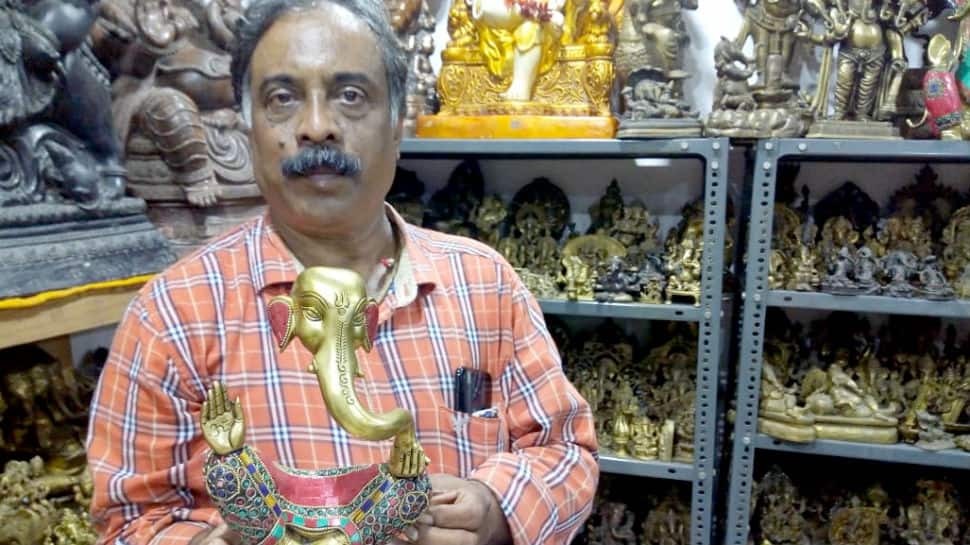 Hyderabad: A Hyderabad resident, Pabsetti Shekhar, claims to have collected 19,022 Idols of Lord Ganesha. He also claims to have a wide collection of 20,426 photographs, 1,098 posters, 200 Ganesha key-chains and 201 audio/video cassettes on Lord Ganesha.

"During my childhood in July 1973, I visited Saibaba temple in Shiridi along with my parents where I brought Ganesh Idol, and that was the time when I started my collection," said Pabsetti Shekhar.

"My collection is from India, USA, Japan, China, Afghanistan, Singapore and other countries. My collection includes 32 forms of Ganesh statues from Bala Ganapati to Sankatahara Ganapati and also Shub Drishti Ganesh, the 33rd form of Ganesh," said Shekhar.

"The idols of Ganesh which I have collected are made with gold, silver, bronze, sandalwood, rosewood and others. I have sketched various forms of Ganesha in modern art and also made out of M-Seal, POP, Ceramic Powder, glass painting, thread and other things," he said.

"I was also awarded the best collection award in Temple of Fine Arts, Malaysia had performed Vishwa Vinayaka Ganesh festival during 2003 in Hyderabad. I organised an exhibition at Juluri Veereshalingam Hall, Secunderabad the rent generated from the stall has been donated to the orphans," said Pabsetti.

Pabsetti claims that he was honoured by Guinness World Record and also by LIMCA Book of Indian Records and many other awards.

"I am scripting a book 'Vishwa Vinayaka', covering world Ganesh Temples and Indian Ganesh Temples. This book will be published for charity. I have a plan of Constructing Punch Mukha Ganesh Temple at Hyderabad to help needy people and to solve various problems of the people," he said.