So much LOVE! Forest officer gets a hug from baby elephant, viral photo wins hearts online

A baby elephant greeting a forest official with an adorable hug is taking the internet by storm. Here's how the internet reacted. 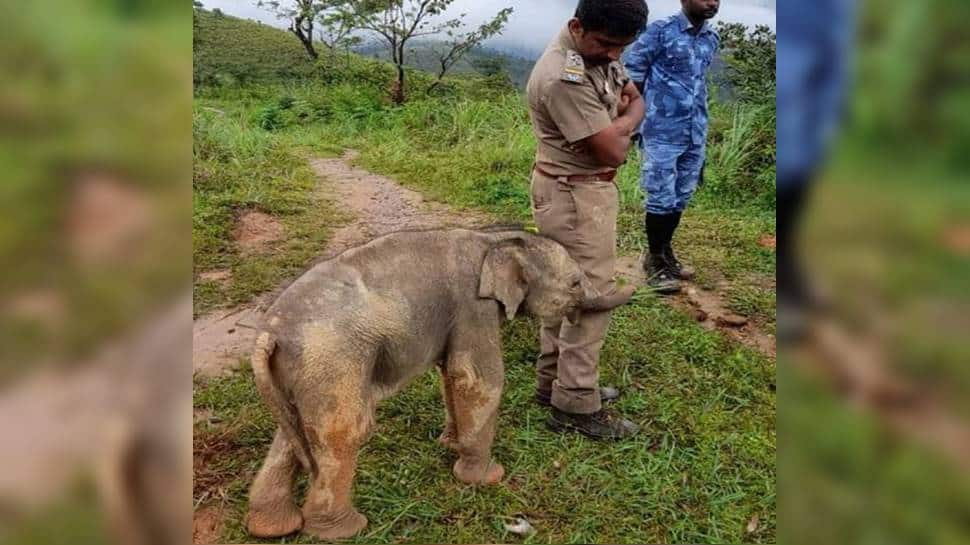 New Delhi: Nothing warms the heart more than watching the bonhomir between humans and animals, in an adorable picture a baby elephant is seen giving a forest ranger a 'hug'.  The picture showcases baby elephant standing by the officer's leg and wraps its little trunk around officer's leg in the sweetest way possible.

The picture truly captures the "love has no language" epitah.The picture has been winning hearts online since it was uploaded on October 14. Officer Kaswan further informed that the hug was the calf's way of expressing gratitude after the calf was reunited with its mother. A picture posted by IFS officer Parveen Kaswan has been winning the hearts online.

"Love has no language. A baby elephant hugging a forest officer. The team rescued this calf & reunited with mother," he wrote in a tweet.

Love has no language. A baby elephant hugging a forest officer. The team rescued this calf & reunited with mother. pic.twitter.com/BM66tGrhFA

Giving more details, IFS officer Sudha Ramen shared the incident whcih happened on October 6 when the little calf is seen happily walking through the forest on its way to meet its mother. The infant elephant was "guarded with Z+ security" of the Tamil Nadu Foresters team, officer Sudha mentioned.

"Earlier, the calf was found alone and injured. Tamil Nadu forest team rescued treated unescorted the little one to join with the mother," she added. See video:

This little calf happily walks to get reunited with its mother guarded with Z+ security of the Tamilnadu Foresters team.

Earlier the calf was found alone & injured. TN forest team rescued, treated and escorts the little one to join with the mother. #Hope #Happiness pic.twitter.com/7vFxRr03IP

Users have been commenting on how 'beautiful' the picture is while one cheekily wondered why the officer did not hug the calf back. The tweet has garnered more than 15k likes and 1,460 retweets.