The US bombers did not violate Russia’s border and the interception by Su-27 jets were performed in strict compliance with the international air law. 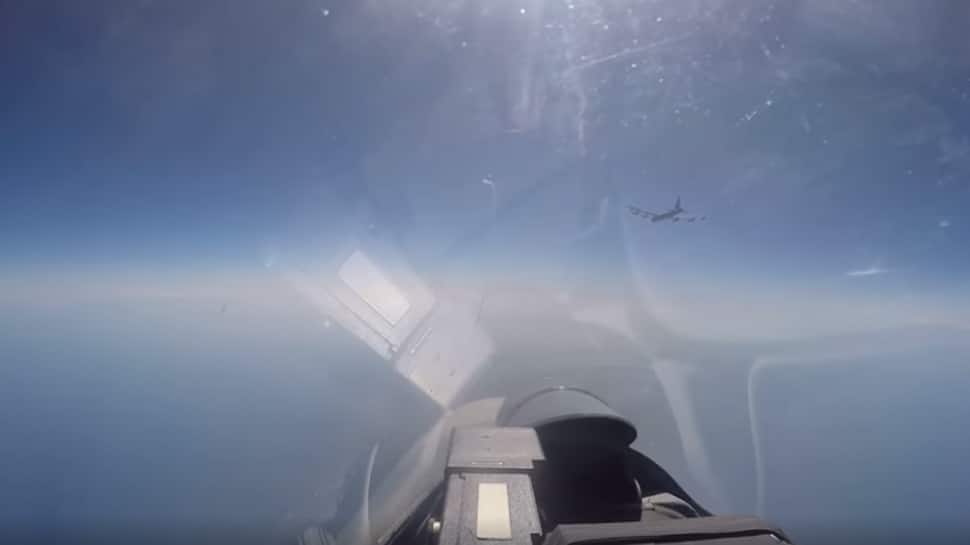 Photo: Facebook/Ministry of Defense of the Russian Federation
Share:
Written By:

Russia claims United States of America bombers were intercepted by its fighter jets when the former were trying to approach its border from the Black and Baltic Seas. The Russians scrambled Sukhoi Su-27 fighters to track and intercept the US B-52H strategic bombers, which can carry nuclear weapons, after they allegedly came near the Russian border.

"On June 17, 2019, crews of Russian Su-27 fighter jets that were on combat duty intercepted US B-52H bombers that were approaching Russia’s state border from the Black and Baltic Seas," a spokesman for Russia’s National Defense Management Centre said on Monday.

The spokesperson added that the US bombers did not violate Russia’s border and the interception by Su-27 jets were performed in strict compliance with the international air law. The five-crew manned B-52H can carry approximately 70,000 pounds (31,500 kg) of mixed ordnance, including bombs, mines, missiles, in various configurations.

Over the last few weeks, the Russian and American militaries have intercepted each other's aircraft and warships regularly.

Russia is already tracking NATO's 47th annual Baltic Operations (BALTOPS 2019) in the Baltic Sea using warships from its Baltic fleet. Stoikiy and Boikiy corvettes along with Liven small missile ship, all part of Russia's Baltic Fleet, are keeping an eye on the military exercise in the Baltic Sea waters in which the USA and 17 other European nations are taking part.

Russian Navy too is conducting an exercise in close proximity to the BALTOPS 2019 naval exercise in Germany's Baltic Sea port of Kiel. Its warships - Stoikiy, Boikiy and Liven - are also taking part in the exercise.

On June 10, 2019 Russian Su-27 fighter had intercepted a US Air Force RC-135 and a Swedish Air Force Gulfstream reconnaissance aircraft near the Russian border. Earlier on June 4, a Sukhoi Su-35C fighter had intercepted a P-8A Poseidon aircraft of the United States of America thrice in less than three hours in international airspace over the Mediterranean Sea. While the US Naval Forces Europe-Africa (US 6th Fleet) claimed the P-8A Poseidon was operating consistent with international law and did not provoke the Su-35C, the Russian Defence Ministry rejected the American claim that its jet had unsafely conducted the intercept of the US military jet over the Mediterranean.

Three days on June 7, Russian and American warships had a near miss in the South China Sea. The United States Navy released video footages of what it claimed was "an unsafe manoeuvre" by a Russian anti-submarine destroyer, which came within 50 metres of its guided-missile cruiser USS Chancellorsville. The footage showed the Russian Pacific Fleet's anti-submarine destroyer Admiral Nikolai Ignatevich Vinogradov almost colliding with USS Chancellorsville.

According to the US Navy, the USS Chancellorsville was operating in the Philippine Sea when "at approximately 11:45 am on June 7 (9:05 am Friday, in India) the Russian destroyer (Udaloy I DD 572) made an unsafe manoeuvre against USS Chancellorsville (CG-62), closing to 50-100 feet putting the safety of her crew and ship at risk".