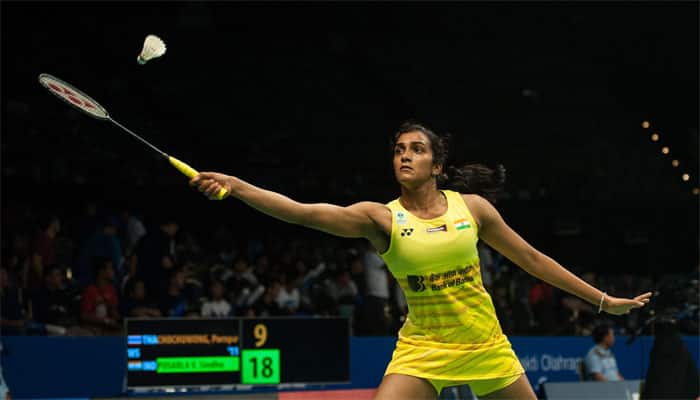 Playing her second tournament of the new season, Sindhu came agonisingly close to clinching the title before losing 18-21 21-11 20-22 to Zhang in the women's singles final.

Sindhu always played long matches against Zhang, all of them going to the decider, and it was no different as the duo battled till the last point.

Prior to today's loss, Sindhu had won twice and lost once at the Indonesia Super Series Premier last year against the American.

All England Championships finalist and fourth seed Shi Yuqi of China walked away with the men's crown after beating world no 7 and third seeded Taiwanese Chou Tien Chen 21-18 21-14 in a 47-minute duel.

"Last year I didn't win any tournament, so glad to win this and hope this becomes first of many to come," world no 8 Shi Yuqi said through an interpreter.

"I had played him before, so I analysed those matches and it helped me win today. There were lot of long rallies in this tournament and I will take a lot of positives from here. It will boost my confidence."

Chou, who settled for runner-up here for the second successive time, said: "I tried to push him but it is difficult to play against him. He smashed well. He is young and was stronger today. He was more focused than me."

Fifth seeded Danish combo of Mathias Christiansen and Christinna Pedersen prevailed 21-14 21-15 over Indonesian pair of Praveen Jordan and Melati Daeva Oktavianti in a 37-minute match to claim the mixed doubles crown, their first title together.

"We know the Indonesians are very good and if we play too defensive or slow it will be difficult to beat them so we played an attacking game," said Christinna after the match.

"It is a long season and we would be playing at European Championship and All England next, which would be a big challenge," she added.

Third seeded Indonesian pair of Greysia Polii and Apriyani Rahayu, who are ranked world no 7, defeated second seeded Thailand combo of Jongkolphan Kititharakul and Rawinda Prajongjai 21-18 21-15 in a 58-minute match to clinch the women's doubles title.