Heavy rainfall has disrupted normal life out in Bihar's Patna since last few days as the city and its nearby areas has been witnessing a flood-like situation. 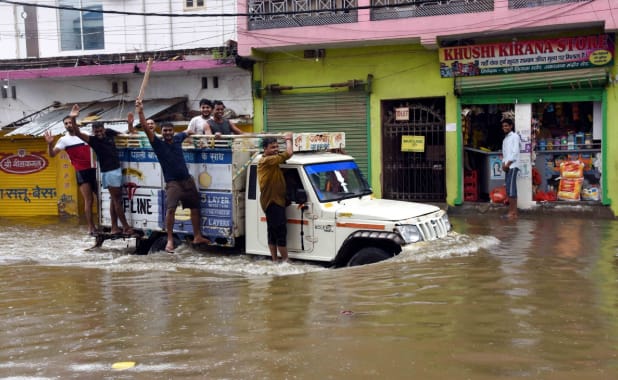 New Delhi: Heavy rainfall has disrupted normal life out in Bihar's Patna since last few days as the city and its nearby areas has been witnessing a flood-like situation.

Local authorities along with National Disaster Response Force (NDRF) teams have been deployed to shift people from low lying areas to safer locations.

In the face of the calamity, the Bihar government has issued emergency helpline numbers for people in need.

Below are the emergency numbers are:

The death toll due to incessant rainfall and flood in different areas of the state has risen to 29, officials said on Monday. According to the Bihar State Disaster Management Authority, till now, 29 people have died in the state due to rainfall.

The state government has requested the Indian Air Force (IAF) for two helicopters for lifting and airdropping food packets and medicines, in the flood-affected areas of the region.

Dewatering machines have also been sought by state to provide relief in the flood-affected areas.

On Sunday, CM Nitish Kumar visited the severely flooded areas of the state capital and issued necessary instructions to the officials for resolving the issue. The CM first visited the Dak Bungalow Chauraha. He then visited Gandhi Maidan, Exhibition road, Kankarbagh Road, NMCH, Agamkuan bridge and Anishabad which are severely waterlogged.

Earlier while speaking to media in Patna, the Chief Minister said, "There has been heavy rainfall in some areas since yesterday and water in Ganga River is rising constantly. But there are proper arrangements and administration is at the spot and making all the efforts to help people."

According to the India Meteorological Department, Patna will receive more rainfall for the next few days accompanied by thunderstorms.