The Bihar Legislative Assembly witnessed a high drama on Tuesday after the opposition lawmakers created a ruckus during a debate over a bill introduced by the Nitish Kumar government aimed at giving more teeth to the police force. 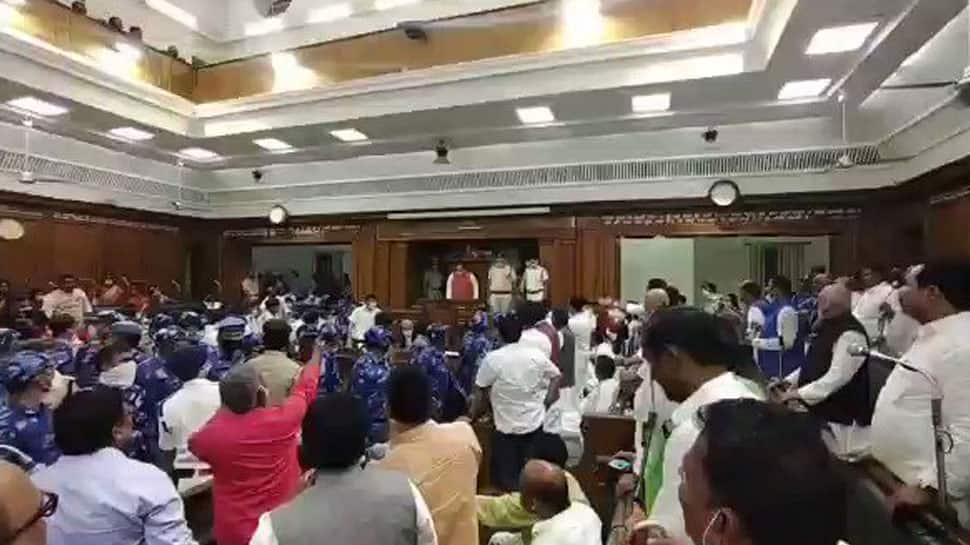 PATNA: The Bihar Legislative Assembly witnessed a high drama on Tuesday after the opposition lawmakers created a ruckus during a debate over a bill introduced by the Nitish Kumar government aimed at giving more teeth to the police force.

The protest by the opposition lawmakers led to unprecedented turmoil in the House after which police was called in to physically evict legislators who had laid siege to the Speakers chamber.

#WATCH Bihar: Women MLAs of the Opposition being carried out of the Assembly building by women security personnel. They (MLAs) were refusing to allow Assembly Speaker Vijay Kumar Sinha to step out of his chamber. pic.twitter.com/Skj0LayFs4

Members of the opposition Grand Alliance, comprising RJD, Congress and the Left, were agitated over the Bihar Special Armed Police Bill, 2021, and the ruckus created by them caused proceedings of the assembly to be adjourned as many as five times during the day.

Draconian Act which will give absolute powers to Police,so that it can act as veritable arm of Nitish's dictatorial politics, has been passed in police protection by throwing out battered MLAs using Police itself.

See how Police is blocking our MLAs inside the house. Shameless! pic.twitter.com/EnUNg5GsWM

The police carried out a baton-charge in the Bihar Assembly premises to disperse legislators of opposition parties holding a sit-in outside the Speaker`s chamber.

Policemen were also seen kicking and punching agitating legislators. Many lawmakers said that they had sustained injuries.

Legislators of the RJD, Congress and Left parties were sitting outside the chamber of Speaker Vijay Sinha to protest the forcible act of Patna police in arresting top RJD leaders at Dak Bungalow Chowk earlier in the day ahead of the `Vidhan Sabha Gherao` it had called against rising incidents of crime, deteriorating health system, unavailability of jobs etc.

Bhai Virendra, the RJD MLA from Maner said, "Chief Minister Nitish Kumar is directly involved in the brutal act. He is behaving like Hitler. He has given a free hand to police to initiate a lathi-charge on us. Many of us have received a fracture in hands and skulls."

RJD MLC Subodh Rai said, "We were assembled there to point out our grievances but the Speaker did not listen to us. Still, we peacefully sat there in expectation that he would come out from his chamber and listen to us but he didn`t. The police and marshals of the Vidhan Sabha forcibly threw us out from the premises.. their act was cruel behaviour with public representatives. We are not criminals."

Vijay Kumar Singh, Speaker, Bihar Legislative Assembly, too condemned the incident and said, “Today's incident is condemnable. All members of the Assembly should respect the Constitution. This is a serious issue.’’