Several people lost their lives during the Chhath Puja across Bihar. 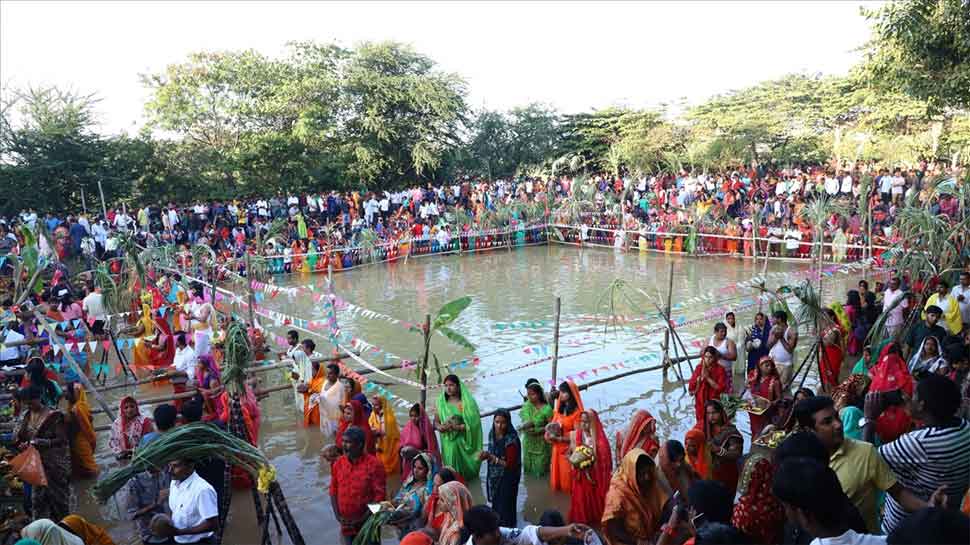 New Delhi: Several unfortunate incidents marked the final day of Chhath Puja in Bihar, claiming a few lives and leaving many injured. In the latest, two minors were killed after a stampede broke out in Aurangabad. According to sources, the authorities acted swiftly to bring the situation under control within minutes. The cause of the stampede is believed to be a large turnaround at the ghat for Chhath Puja. In another incident, the wall of a temple collapsed during the puja in Samastipur, claiming two lives.

Here are the few tragedies which occurred on the last day of the Chhath Puja 2019 in Bihar.

In Aurangabad, at least two children were killed after being crushed by a stampede during Chhath Puja. The deceased children were a six-year-old boy from Bihta in Patna and an 18-month-old girl from Bhojpur. A few people have also been injured in the stampede.

The incident took place at a Suryakund.

The cause of the stampede was an unexpectedly large turnaround for Chhath puja, according to the District Magistrate Rahul Ranjan Mahiwal and SP Deepak Barnwal.

In Samastipur, at least four people were killed and several others were injured after the wall of a temple collapsed during the Chhath Puja. The incident took place due to the breaking of the wall of the old Kali temple located at village Badgaon in Hasanpur police station area. While two were crushed on the spot, two others, both women, died during the medical treatment at a hospital. The condition of two other women is said to be critical.

According to the police, several others are feared to be trapped inside the debris and the toll is likely to go up.

A 40-year-old man drowned while taking a bath at a ghat in Saharsa in Bihar. Due to the strong river current, the body is believed to have been swept away and has not been recovered yet. Meanwhile, the local divers are trying to trace the body of the deceased. The incident took place at Chhath ghat located at Sagma bridge in the Itahari OP area of Banma.

A 25-year-old youth, identified as Rahul Kumar, resident of Bakhtiyarpur, drowned in Ganga river during the Chhath Puja. The deceased's body was pulled out of the river due to the efforts of family and local villagers.

An eight-year-old died due to drowning in Rukmania village of Beldore police station area of ​​Khagaria. With the efforts of locals present at the ghat, the child was pulled out of the river. However, by the time he was taken out of the water, he was dead. The police, upon reaching the site, took the body and sent it for post-mortem at Khagaria Sadar hospital. The deceased has been identified as Om Prakash. As per police, he was offering water to Sun God when he lost his balance and went deep into the water.

In another incident, a minor girl drowned in Rasok Ghat of Bagmati River during the Chhath Puja. The locals tried to pull out the deceased's body from the river. Meanwhile, a SDRF team was also present at the ghat following the incident. The incident took place at Rasok village of Morkahi police station area.