Battle over Sabarimala is purely political, not about religion, gender equality or culture

The controversy over Sabarimala is about the agendas of some who are seeking a political right to enter the temple as if it were a public place, not a special place of worship for a particular community. 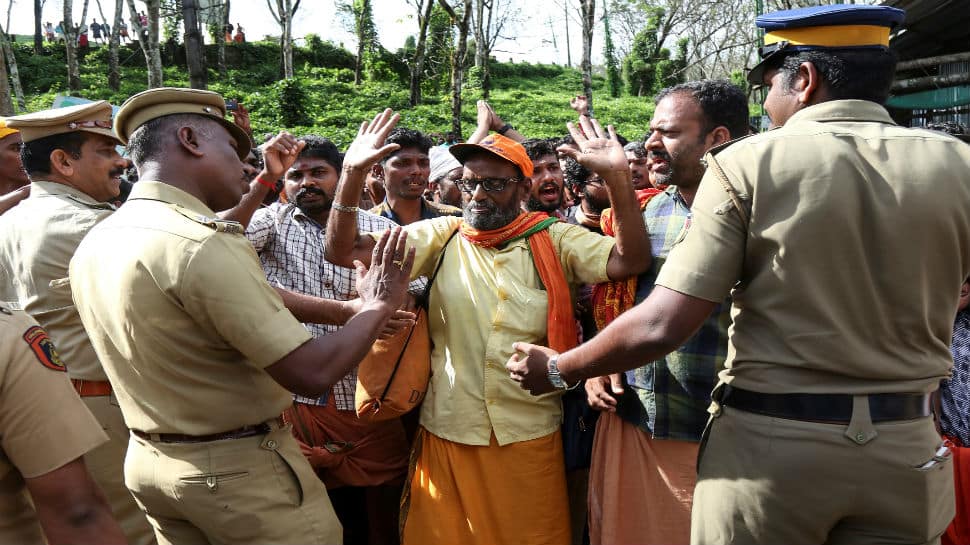 (Note: This column is the second of a two-part series on the relationship between the Central and state governments and courts on the one hand, and Hindu temples and their traditions on the other. The two-part series is written in the context of the ongoing controversy surrounding the entry of women into the Ayyappa Temple at Sabarimala.)

Part I: Hindu temples are targets of systematic oppression by government, courts

In the second part of this series, we will look at the specific issues relative to Sabarimala in light of the Supreme Court decision that women of all ages must be allowed in the temple, and the Kerala government determination to use intimidation and force to bring this about, with Hindu devotees resisting such interference in their ancient temple traditions. Here we will look at the spiritual, religious, legal and political issues involved and whether such interference in Hindu temple traditions is warranted or justified.

Sabarimala is one of the most famous and popular temples in India and has been so for generations. Some call it the most frequented sacred site in the world on a yearly basis with many millions attending. Ayyappa is a unique joint form of Lord Shiva and Lord Vishnu.

Like other Hindu temples Sabarimala has special traditions and its own specific audience. Sabarimala aims mainly at a male audience following detailed ascetic practices, emulating the deity Ayyappa. Though one does not have to be a monk to enter, one does have to follow austere practices during the pilgrimage. For this ascetic tradition, women are not allowed, except for children and women over fifty.

This is not a denial of women from entering Ayyappa temples, but reflects the particular traditions of Sabarimala. There are thousands of Ayyappa shrines and temples where women can go and women are allowed into the great majority of Hindu temples, many of which are to female deities or goddesses. Such special rules of temple entrance are not uncommon. There are women's temples where men cannot go. The controversy is that some claim it is be a violation of women's freedom and rights to worship to prevent them from entering the temple.

Yet, the women trying to enter Sabarimala recently and break these temple traditions have not been devotees, or even Hindus, and have included Muslims, Christians and Communists. It is not a religious right to worship they are seeking but a political right to enter the temple as if it were a public place, not a special place of worship for a particular community.

Such non-devotees try to enter the temple without following the vows and rituals required for devotees to do so. We cannot imagine Hindus being similarly allowed to enter into churches or mosques and interfere with their practices. In fact, the same Kerala government that is trying to force entrance into Sabarimala is protecting mosques and not requiring them to allow women to enter.

We should note that in all major religious traditions in the world there are practices, sacred sites and religious orders that keep men and women apart. This is simply to keep the energy away from sexuality and to promote spiritual or ascetic practices. The separation of the sexes at Sabarimala has many counterparts from throughout the world from Japanese Shinto shrines to the Mt Athos monastic site in Greece. Religion and spirituality aim to take people beyond the physical world, which result in a variety of ascetic practices or forms of self-discipline, regulation or isolation, including vows of celibacy.

Such a diversity of religious practices is more pronounced in Hindu temples that have a greater diversity of deities and gurus than in other religions that are more uniform in their beliefs. For example, the Kamakhya Hindu temple in Assam uniquely honors the menstruating form of the Goddess, which you would not find in Christianity or Islam. In fact, Christianity and Islam do not accept the Goddess or have any Goddess temples like the Hindus.

The question therefore arises: why should the Communist government of Kerala, which claims to be atheist, quickly resort to police force and intimidation to try to get long-standing Sabarimala traditions to change according to recent unexpected government or court decisions? Such violence against Hindu temples has not occurred since colonial rule and is out of place in dealing with religious causes and devotees.

Note there has been no seeking the views of Hindu gurus and acharyas on this issue either, which has been decided by non-religious authorities, who have no special expertise in the subject. Nor has time been taken to hear understandable and predictable Hindu objections before bringing in the police. There was no law and order problem at Sabarimala to begin with but only what was created by government interference in the temple and its sacred practices.

The real issue is government and court interference in Hindu religious sites and practices that are arguably outside their jurisdiction to begin with. In this regard, protecting Sabarimala from interference may be the most crucial consideration, since if it is not countered many other temples in India can be also interfered with, resulting in temple traditions forcefully altered or eliminated.

Hindu temples form a central part of India's vast spiritual heritage and should be kept free of government interference, just as the government does not interfere with churches or mosques or take their revenues.

Such interference in Hindu temples and practices is clearly a form of religious discrimination that must come to an end. The unique spiritual practices of Hindu temples should be left alone. Hindu temples, unique among the major religions of the world, honor the Divine in male and female forms, animal and plant forms, as formations and forces of nature from mountains and rivers to the Sun, the Moon and the Earth itself - ultimately as ones very Self or Atman. This Hindu temple tradition is a unique and vast cultural and spiritual heritage to be honored, protected and preserved.