Dear Sanjay Dutt, you just demonstrated why MeToo is doomed in Bollywood

The alleged victim is being outshouted by those who are trying to curry favour. 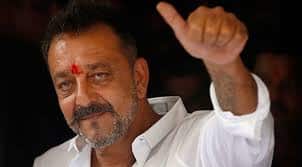 Sanjay Dutt, who had so far wisely kept mum over his director-friend Raj Kumar Hirani's sexual harassment charges, opened his mouth and put his foot right into it.

Last week, he told Rajeev Masand, "I don't believe in those allegations. I have worked with him in so many films, it's been so many years and I don't know why that lady is putting these allegations. It does not make sense to any one of us. If you have some allegations, file an FIR, do something. But Raju Hirani and those kind of allegations… I don't think so."

This is just the kind of arrogant support that Hirani doesn't need. First of all, it comes from an actor who is very close to the director. They've worked together through the two highly successful Munnabhai films, and Hirani recently made a sanitised biopic on the notorious life of Sanjay Dutt.

Dutt is in no position to comment on Hirani's innocence, as a large number people don't believe in Dutt's innocence in the TADA case, which Hirani's bio-pic on Dutt so diligently sets out to espouse. Significantly, Dutt includes other people in Hirani's circle of believers when he said, "It does not make sense to any of us."

I'd presume "us" includes Munnabhai producer Vidhu Vinod Chopra, Sanju star Ranbir Kapoor - who played Sanjay Dutt - plus all those who are too busy scoring brownie points with the producers to bother with Hirani's innocence or guilt.

We can safely assume it is back to business for Hirani. The girl who accused Hirani of harassment would have her voice outshouted by the naysayers who believe Hirani is too talented to be guilty of something so crude.

By this reasoning, the super-gifted Woody Allen should have been working as usual. But this brilliant director, who had the entire American and British acting fraternity tripping over one another to work with him, has been ostracized after old allegations of sexual harassment surfaced again.

Today, no major actor wants to work with Woody Allen. So, is Raj Kumar Hirani more talented that Woody Allen? Or, is he just more forgivable? When Sanjay Dutt says the film industry won't accept Hirani's culpability because of his past record then we know the MeToo movement is doomed in India.

To be proven guilty of sexual harassment the world must be provided proof of the dirty deed. No girl uses a hidden spy camera when a filmmaker tells her to get comfortable. So, Hirani is as innocent as Sanjay Dutt must have been. I can't wait for a biopic on Hirani, the director who made the jadoo ki jhappi a fundamental part of the Indian middle class's belief in the goodness of the heart.