It is likely that the certification process may take some more time and it may be ready for release only next year. 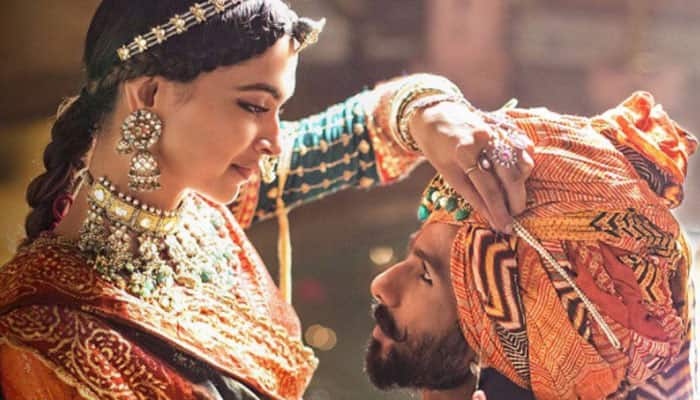 Mumbai: The release date of Sanjay Leela Bhansali’s magnum opus Padmavati starring Deepika Padukone, Shahid Kapoor and Ranveer Singh may be pushed to next year. The controversy-stricken film, which hasn’t yet got a clearance from the Central Board of Film Certification, was initially slated to hit the silverscreen on December 1.

But now that the film hasn’t been viewed by the CBFC members, it is likely that the certification process may take some more time and it may be ready for release only next year.

Media reports have claimed that the film is now pushed for next year and the promotions have been put on hold.

The producers of Padmavati will take a call on its release only after the censor board's go-ahead, a source said Tuesday.

The film has been in the eye of the storm owing to his historical content. Soon after the film went on floors last year, rumour mills said that the film had a dream sequence between Deepika (who plays Rani Padmavati) and Ranveer (who essays Alauddin Khilji). However, the makers, issued statements, addressed protestors via a video message clarifying that the film doesn’t have any objectionable content.

Unfortunately for the producers, the film has caused a nationwide stir leading to violent protests and condemnable statements.

Following massive protests, here’s what the makers decided to do:

On Sunday, Viacom18 Motion Pictures, the studio behind Padmavati, announced in a statement that they were voluntarily deferring the release of the film out of "respect and regard for the law of the land" including the Central Board of Film Certification".

They said a new release date will be announced once the "requisite clearances" are in place.

What did the Censor Board say?

CBFC chief Prasoon Joshi had Monday said that the board should be given adequate time to come up with a balanced decision about the movie.

A source in the CBFC Tursday echoed Joshi's views.

"In CBFC, 68 days is the maximum time (to certify a film), it can be less also. We normally do it in a month or over a month's time (certification). With a film like this, you need to be careful, take opinions, so it takes a little bit of time. It does not mean that nothing will happen before 68 days. If they (makers) want a certificate on time, it is advisable that they take this much time in consideration," the source said.

The CBFC had initially returned the application to the makers of Padmavati, saying it was incomplete. The makers have re-applied.

The source said: "We have followed the normal process. Once the application comes to us, we scrutinise it. In this case, it was incomplete so we returned it. There was no disclaimer (that it is a work of fiction)... Which is required for a film like this."

"If the application is proper, we give them a date for the screening. We have an examining committee which will see the film. We will also have historical experts (for the screening of the film)... We are just following the procedure," the source added.

When asked if the new application has been scrutinised, the source at the CBFC said, "No, it takes time as we have other films (to certify) as well and 'Padmavati' is just one of them. We have a limited staff, we can't just dump everything aside and concentrate on this. It will take the normal time."

The film also stars Shahid Kapoor in the lead role. He plays brave Rajput warrior Maharawal Ratan Singh, Rani Padmavati’s husband. Bhansali has assured that the film upholds the pride and glory of the Rajputs and that there wouldn’t be anything distasteful in the film.

Fukrey Returns has a new release date – Check it out here