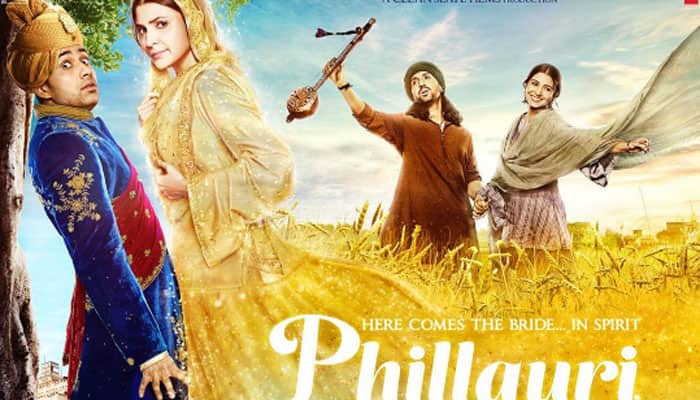 When the setting is Punjab, we assume a lot of things Punjabi. 'Phillauri' directed by debutant filmmaker Anshai Lal is a light-hearted comedy drama with a slice of spookiness to chill your spine but with laughter pangs. Yes! Phillaur is a railway junction on the border line of Ludhiana and Jalandhar, and the people who hail from the town are called Phillauri.

This beautiful narrative written by Anvita Dutt oscillates between flashback and present times. The opening scene where Suraj Sharma (Kanan) dreams about getting married and eventually lands in Amritsar to get hitched with his childhood sweetheart Mehreen Pirzada (Anu) has been brilliantly shot.

The direction is crisp and the camera work by Vishal Sinha is worth a watch too. The screenplay moves forward smoothly with a lot of comic punches flowing into the story as Kanan and family get into the big fat Punjabi wedding gusto. We get to see the typical beeji raising a toast, and how everyone is gung-ho about getting ready loud and clear in a shaadiwala ghar, leaving the poor groom a little hassled. Suraj Sharma as Kanan is the best thing to have happened to 'Phillauri'. If he impressed you in 'Life of Pi' then this one will perhaps leave you wanting to watch him more as he delivers amazingly on-screen.

The debutant actress Mehreen Pirzada too has been given a fair share of screen space to prove her acting mettle and she does perform well. The actual drama begins when Kanan, who happens to be a Manglik has to marry a tree to ward off evil, or so they say ( yes, the superstition has been addressed and how!).

But alas! Kanan gets Shashi in return as a wife. You will love the parts in the first half where Anushka Sharma as Shashi spooks the hell out of Kanan. The conversation between the two and the natural flow of dialogues will leave you smiling more.

The screenplay meanders between Shashi's flashback story and Kanan's current state. The latter suffers a commitment phobia just days before getting married to Anu. When in the beautiful Phillaur, we get to see the dashing Sardar Diljit Dosanjh as Roop Lal Phillaur.

He is the man, who is blessed with a golden voice and every girl desires him secretly. Shashi and Roop's love story can easily be seen as the backdrop of a story which intertwines itself with Kanan and Anu's love tale. The comparison and contrast between the two remain crystal clear and presented in a complex-free manner.

Diljit and Anushka's chemistry looks fresh and believable. The supporting cast too has done a great job. Besides, the music by Shashwat Sachdev and Jasleen Royal and the background score by Sameer Uddin is quite in sync.

But some things remain unexplained in the narrative. Like how does Kanan know that Anu can just see the dupatta on Shashi and not the ghost like him? Editing could have been a bit tighter as some scenes look too much stretched.

However, the friendly ghost of Shashi haunts Kanan and he can't really help it. Why? Well, there's some unfinished business which compels Shashi to stay tucked with Kanan. What is it? For that, you must visit a theatre near you and watch 'Phillauri'.

The story is magical with a beautiful yet dramatic twist in the end. Move over human love stories as here comes a ghost story about timeless love!