The prolific Smith was caught by Ben Stokes at leg slip off Stuart Broad shortly after lunch, the first time in 11 Test innings against England that he had failed to pass fifty. 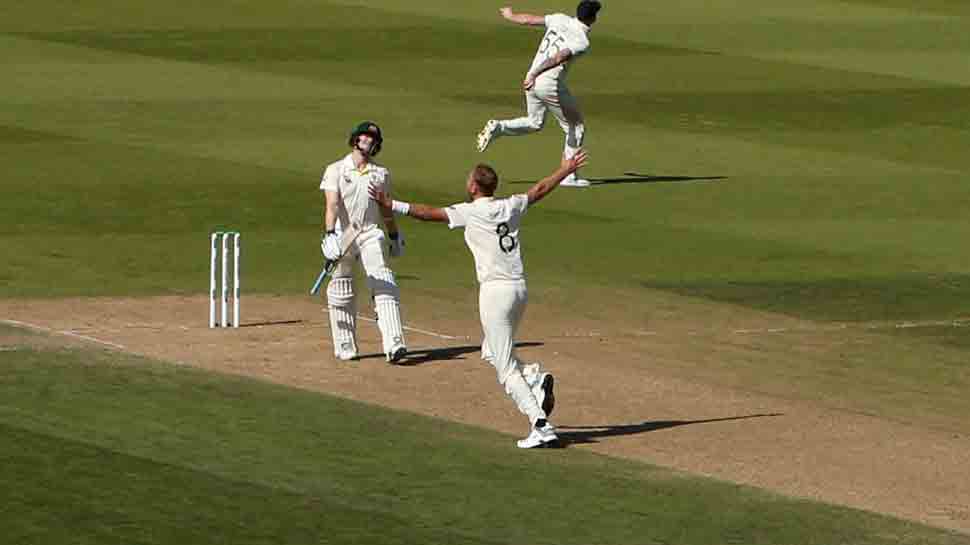 Steve Smith was out for 23 as Australia, chasing 399 for victory, moved on to 167 for five at tea on the fourth day of the final Ashes Test against England at The Oval on Sunday.

The prolific Smith was caught by Ben Stokes at leg slip off Stuart Broad shortly after lunch, the first time in 11 Test innings against England that he had failed to pass fifty.

Matthew Wade struck a defiant half-century but the touring side also lost Mitchell Marsh in the afternoon session as England closed on a victory that would level the series at 2-2 and ensure the first drawn Ashes since 1972.

Australia, who have already retained the Ashes, need 232 runs to snatch an unlikely win and secure their first Test series triumph in England since 2001.

Smith left the field to a standing ovation from the crowd in recognition of an extraordinary run of form which brought him 774 runs in the series including a double century and two hundreds in seven innings.

The 30-year-old right-hander missed the third Test because he was suffering from concussion symptoms after being struck on the neck by a Jofra Archer bouncer in the second match at Lord`s.

Australia lost the wickets of Marcus Harris, David Warner and Marnus Labuschagne in the morning after England had added 16 runs to their overnight score of 313 for eight.

Harris was bowled by Broad for nine, his off stump sent cart-wheeling out of the ground by the England fast bowler, and Warner`s miserable series was completed when he edged Broad to Rory Burns at third slip for 11.

Labuschagne had enjoyed a good series but, on 14, he was drawn forward by a flighted delivery from spinner Jack Leach and wicketkeeper Jonny Bairstow whipped off the bails with the right-hander narrowly out of his crease.

Australia took lunch on 68 for three but any realistic hopes of getting close to their target disappeared with Smith`s dismissal.

Marsh was given a reprieve on six when he was called back to the crease after edging Chris Woakes to Burns at slip because replays showed the bowler had delivered a no ball.

Wade reached his fifty, including eight fours, before Marsh perished for 24, caught by Jos Buttler at short leg off the part-time spin of England captain Joe Root. Australia captain Tim Paine was unbeaten on 10 at the interval with Wade on 60.