Cricket 2019 in review: A look at the top moments

International cricket witnessed a lot of exciting performances in 2019, with many records tumbling and history being created. From England winning their maiden International Cricket Council (ICC) World Cup title to the introduction of the ICC Test Championship, 2019 was full of action. 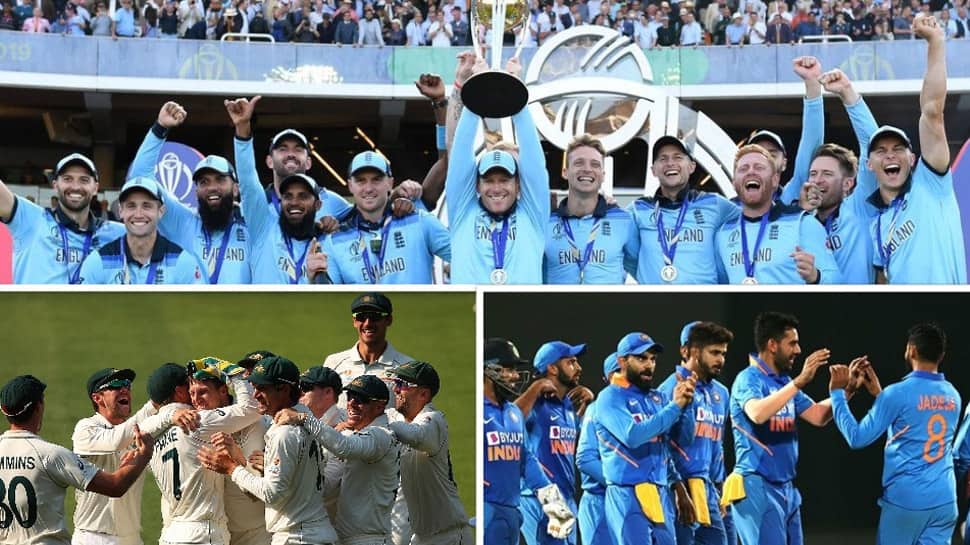 International cricket witnessed a lot of exciting performances in 2019, with many records tumbling and history being created. From England winning their maiden International Cricket Council (ICC) World Cup title to the introduction of the ICC Test Championship, 2019 was full of action.

As 2019 ends, let us have a look back at some of the unforgettable moments of the year:

The 2019 edition of the World Cup was the biggest tournament of the year hosted in England and Wales, with a total of ten teams participating in it. The hosts finally ended their long-standing wait for their maiden title at the 2019 showpiece event by winning the summit showdown against New Zealand on the basis of more number of boundaries scored after the Super-Over too ended in a tie at iconic Lord's.

England ended the round-robin stage at the third spot after winning six out of nine group clashes. New Zealand, on the other hand, qualified for the semi-finals of the World Cup on the basis of a better run-rate than Pakistan after five wins from nine matches.

While New Zealand sealed a narrow 18-run win in the first semi-final clash against India at Old Trafford in Manchester, England booked their place in the summit showdown with an eight-wicket victory over Australia in the second last-four clash at the Edgbaston Cricket Ground in Birmingham.

In the final clash, the match was forced to a Super Over after the two sides ended on 241 in their stipulated 50 overs. While Ben Stokes and Jos Buttler came to bat for England in the Super Over, Trent Boult came to bowl for New Zealand.

England scored 15 runs in that over before New Zealand's James Neesham and Martin Guptill also managed to put up the same score to end the Super Over in a tie. Later, the Eoin Morgan-led side was declared winners on the basis of more number of boundaries scored than New Zealand.

Virat Kohli-led India clinched their first-ever three-match ODI series win against Australia Down Under in January 2019. Australia kicked off the series with a 34-run win over the Men in Blue, despite opener Rohit Sharma's blistering 133-run knock in India's chase of 289.

In the second ODI, the Indian skipper led from the front as he scored a knock of 104 runs to help India chase down the target with four balls to spare and clinch a series-leveling six-wicket win over Australia at the Adelaide Oval.

The Men in Blue continued their momentum in the third and final match to record a seven-wicket win and clinch their first-ever bilateral ODI series win Down Under.

Wicketkeeper-batsman Mahendra Singh Dhoni and Kedar Jadhav played crucial unbeaten knocks of 87 and 61, respectively to help the visitors chase down the target of 234 runs in 49.2 overs at the Melbourne Cricket Ground (MCG).

With the win, Kohli also became the first captain ever to guide the Men in Blue to ODI series win in Australia.

In July 2019, the ICC officially launched the inaugural edition of the World Test Championship (WTC), which got underway on August 1, 2019.

The top nine Test teams in the world namely Australia, Bangladesh, England, India, New Zealand, Pakistan, South Africa, Sri Lanka and the West Indies are featuring in the WTC and competing in 71 Test matches across 27 series over two years.

Like every year, the Ashes series—which is played between England and Australia—was one of the major cricket events of 2019 as well. This year’s Ashes took place in England and ended in a 2-2 draw after both sides won two matches each.

However, the Ashes was retained by the Australian men’s cricket team after they clinched the fourth Test of the five-match series by 185 runs at Old Trafford, Manchester. England won the final match by 135 runs at the Oval to level the series. While Australia and England won the first and third Test by 251 runs and one wicket respectively, the second match ended in a draw at Lord’s.

Notably, it was the first time in 18 years that Australia had retained the Ashes in England.

Australia’s tainted duo of Steve Smith and David Warner made a much-awaited return to cricket following their one-year suspensions for their involvement in the ball-tampering scandal that took place in March 2018 in South Africa. The duo’s year-long bans were ended on March 28, following which they were named in the Australian squad for the 2019 ICC World Cup.

From guiding Australia to the semi-finals of the 2019 ICC World Cup to help their side retain Ashes, Smith and Warner notched up a flurry of runs for their side and helped them attain success during the year.

On individual front, Warner finished as the second-highest scorer after India’s Rohit Sharma in the World Cup with 647 runs from 10 innings. Smith, on the other hand, ended the year at the second spot in the ICC Test rankings for batsmen behind Virat Kohli.

The Virat Kohli-led Indian side became the ninth country in the world to play Day-Night Test when they played the second match against Bangladesh under-lights with a pink ball at Eden Gardens in Kolkata on November 22.

The hosts went on to win that match by an innings and 46 runs inside three days after India bundled out Bangladesh for 106 and 195 runs in their two innings. Kohli’s side posted a score of 347/9 declared and enforced follow-on.

Notably, Australia and New Zealand created history when they played the first-ever pink ball match in 2015 at Adelaide Oval.

Next decade should be about children and their dreams: Sachin Tendulkar