The 28-year-old was sidelined for the recent ODI series against the Men in Blue in India and Pakistan in the United Arab Emirates (UAE) because of a back problem. 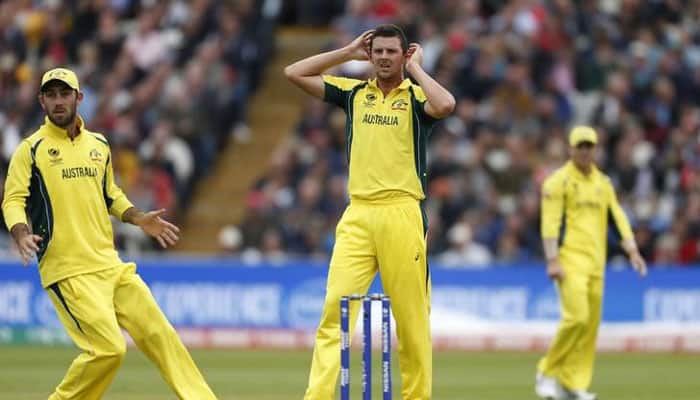 Australian fast bowler Josh Hazlewood, who was recently out of action due to a back injury, has declared himself fit but admitted to be feeling nervous in regards to his selection in the 15-member squad for the upcoming 2019 International Cricket Council (ICC) World Cup.

The 28-year-old was sidelined for the recent ODI series against the Men in Blue in India and Pakistan in the United Arab Emirates (UAE) because of a back problem.

However, Hazlewood revealed that he is absolutely fine now and has already returned to the net for bowling.

"I’ve started bowling, I’m off a couple of steps at the moment, so that will start to ramp up pretty quickly through late April and in to May," the ICC quoted the Australian bowler as saying to Cricket Unfiltered podcast.

Hazlewood's absence saw the likes of Jhye Richardson, Nathan Coulter-Nile, Kane Richardson and Jason Behrendorff stepping up and coming up with some good performances to help Australia clinch series win against India and Pakistan.

With former skipper Steve Smith and former vice-captain David Warner also displaying decent show with the bat in the ongoing Indian Premier League (IPL) following the conclusion of their one-year bans, the national selectors are running out of time to solve the seemingly impossible puzzle of naming Australia’s World Cup squad.

There have been speculations of Hazlewood being dropped for the mega event in order to save him for the Ashes series, beginning in August.

However, Hazlewood believes the World Cup would provide him with the perfect preparation ahead of Ashes series.

“To be fit and ready for that first Ashes Test, you have to have a lot of bowling under your belt anyway.There can’t be a better spot to do that than in a World Cup. One-day cricket, a couple of games a week for five or six weeks is probably perfect prep in terms of body load. Hopefully, I’m there and we can hold on to the trophy," he told.

Though Hazlewood is in no mood to give the showpiece event a miss, he admitted that the selection process is giving him nerves.

“There’s nerves, as there always is before a team is selected for a big tournament.There’s probably 20-plus guys who think they’re a really good chance of making it. It’s a good position to be in for Australian cricket," he said.

The 2019 ICC World Cup is slated to take place from May 30 to July 14 in England and Wales. Australia will kickstart their campaign against Afghanistan on June 1.