Richards had earlier hailed Kohli's batting skills and said that the Indian skipper's batting style reminded him of his own days. 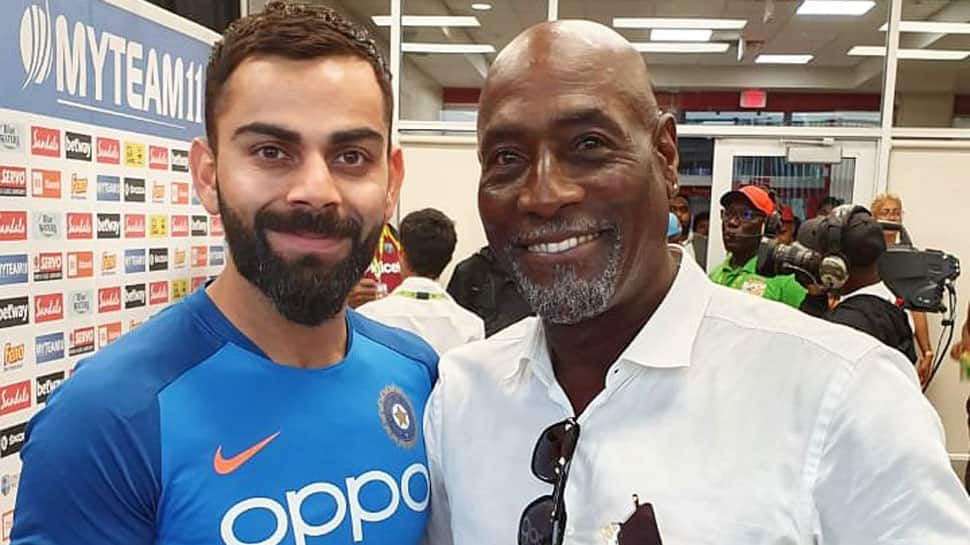 Virat Kohli had a fanboy moment ahead of the first Test as he got an opportunity to interview legendary cricketer Vivian Richards, whom the Indian skipper has always idol-worshipped.

He introduced the Caribbean master as 'the greatest inspiration to all of us batsmen'. Kohli quizzed Viv Richards on how he dealt with the fastest of bowlers of his time without even wearing a helmet or a guard.

"Whenever I have seen videos of you walking out, you're in a hat, no helmets back then. Even when there were, after a point you chose not to."

"I know the pitches were not as prepared or as covered back then. What was it like? What went through your head walking out knowing that you don't have a lot of protection. There is no restriction on bouncers and then you go out and dominate like that."

"What did you feel from the time you left the changing room till you got to the pitch. What was the mindset?" Kohli asked.

"I believed I am the man," said Richards. "It may sound arrogant but I always felt that I was involved in a game that I knew. I would back myself every time."

"You have to back yourself to get hurt, to take the knocks. But the helmet -- I tried, I am not going to lie and tell you. But, it felt a little uncomfortable. So I felt my cap, my maroon cap which was given to me. I felt so proud with that."

"My mindset was that if I am good enough to be here, if I get hurt it's God's will. I will survive," the 67-year-old replied.

Kohli also shared his experience of facing fast bowlers: "I feel like it's better to get hit early on and get to know the feeling than always feeling like you might get hit."

"So, I prefer actually getting hit early on and really hard so it motivates me even further to not allow that to happen again, just that pain to go through your body and be like -- okay enough, it's not happening again."

Richards further said that getting hit was a part of cricket.

"Because to be fair while batting you are going to get hurt. It depends on how you come back from these knocks. In the old days, before these little guards (chest guards) around your ribs, you take it there and that's when you feel it. You take a count but then that's part and parcel of the sport," Richards opined.

Kohli also quizzed him about the challenges Richards faced that made him believe in himself. The former Windies skipper said: "I always felt I was good enough to be competing and I wanted to express myself in the best way that I can."

"I see that little similarity in you and that same passion in you," said Richards as Kohli had his moment, "There are times when folks would look at us and say, 'Wow why are they so angry?"

Richards, who retired from the sport in 1991, amassed 8,540 Test runs along with 6,721 ODI runs. Richards had earlier hailed Kohli's batting skills and said that the Indian skipper's batting style reminded him of his own days.

Getting selected for series against India means a lot, says Rahkeem Cornwall