As India continues its fight against the deadly coronavirus pandemic,the International Cricket Council (ICC) has heaped praises on the Men in Blue's T20 World Cup hero Joginder Sharma who is currently serving the nation with police force. 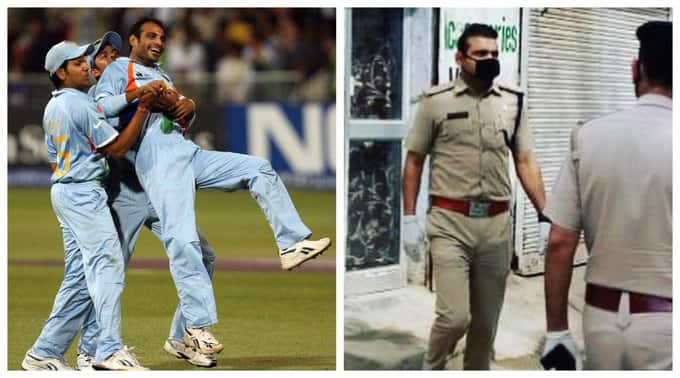 As India continues its fight against the deadly coronavirus pandemic, the International Cricket Council (ICC) has heaped praises on the Men in Blue's T20 World Cup hero Joginder Sharma who is currently serving the nation with police force.

The former Indian all-rounder was one of the shining lights for the country in the inaugral edition of the T20 World Cup in 2007, with his last ball heroics helping India seal a win against arch-rivals Pakitan.

Now almost a decade later, Joginder is once again making his country proud but on a different kind of pitch. The 36-year-old is serving as a Deputy Superidentant of Police in Haryana in India's fight against COVID-19.

"2007: #T20WorldCup hero 2020: Real world hero. In his post-cricket career as a policeman, India's Joginder Sharma is among those doing their bit amid a global health crisis," the ICC wrote.

In his post-cricket career as a policeman, India's Joginder Sharma is among those doing their bit amid a global health crisis.

Besides ICC, Joginder also earned love and apprecition for netizens for donning a police uniform and doing his efforts on the street to help his state combat the threat of the novel virus.

Let us take a look at some of them:

Person like him, makes our planet a better place to live in.
I bow down to each and everyone across the planet who are fighting to win over this pandemic situation.
#StayHomeStaySafe #COVID2019

Thanku @ICC for acknowledging this....he is truly a hero #coronafighter

@jogisharma83 , who famously bowled the final over in India's World T20 win in 2007, continues to serve the country, but, on a different kind of pitch#JoginderSharma#CoronavirusPandemic #TeamIndia #Cricket #BCCI #BREAKING

After bowling the famous last over in the T20 World Cup in which he removed Misbah-ul-Haq to bowl out Pakistan for 152 in their chase of 157, Joginder didn't feature for India and bid adieu to all forms of game in 2018.

He finished his international career with four wickets and 138 runs in four T20Is and one wicket and 115 runs in four ODIs he played for the Men in Blue.

The coronavirus has so far affected more than 900 people in India and claimed the lives of 19 people.

On March 24, Prime Minister Narendra Modi announced a 21-day lockdown in the country in order to reduce the spread of the deadly virus.

Cancel County season if it can't be played in full: England's Alastair Cook