Mandhana is standing at the numero-uno spot with 802 points, maintaining a comfortable lead of 41 points over of second-placed Ellyse Perry of Australia. 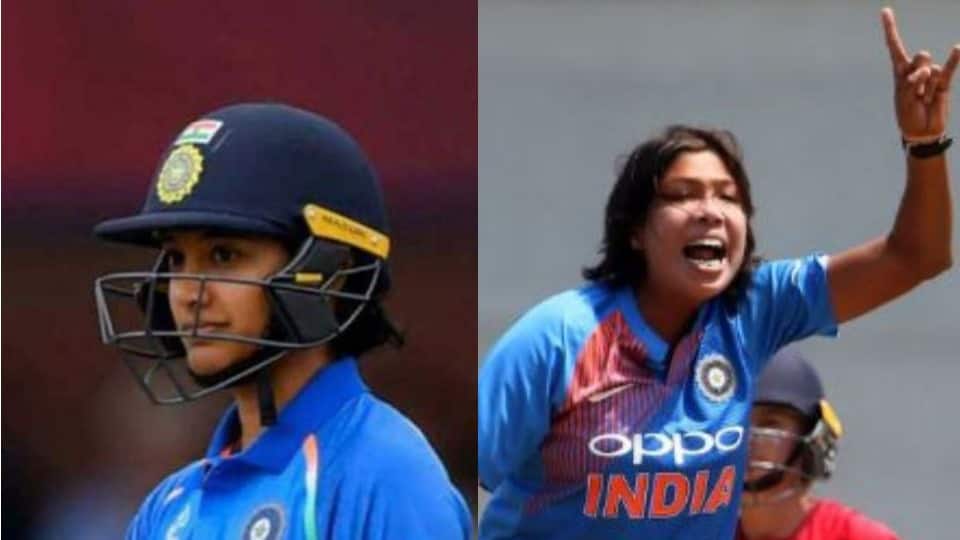 Mandhana is standing at the numero-uno spot with 802 points, maintaining a comfortable lead of 41 points over of second-placed Ellyse Perry of Australia.

Veteran Indian batswoman and former skipper Mithali Raj continues to stand at the fourth place with 717 points. The Indian star is standing behind Amy Satterthwaite (761 points) of New Zealand.

Goswami, on the other hand, holds on to the pole position in the ICC ODI Rankings for bowlers with a minor gap of five points over Perry's teammate Jess Jonassen

The drawn verdict, a consequence of a thrilling tie in the final match in Benoni, resulted in both teams overtaking New Zealand in the points table with South Africa now in fourth position with 16 points from 15 matches and Pakistan on 15 from as many matches.

New Zealand are sixth with 14 from 15 matches in the eight-team championship that provides direct qualification berths to them as hosts and four other teams in the ICC Women’s Cricket World Cup 2021. Australia have already ensured a berth as they are on 22 points from 12 matches while England (18 from 15) and India (16 from 15) are in second and third positions.

Wolvaardt, who topped the series with 134 runs, has moved up three spots to reach 15th position in the list for batters. Nashra has moved up five positions to 21st among bowlers after grabbing two for eight in Pakistan’s eight-wicket win in the first match in Potchefstroom.

There were no changes in the top 10 of the list for batters and bowlers but former captain Sana Mir briefly attained career-best rating points of 729 after the first match, in which she produced a player of the match effort of four for 11. Sana, who is the leading wicket-taker in this edition of the championship with 35 scalps, is now also the most successful spinner in ODIs with 147 wickets, one more than the mark of 146 shared by West Indies’ Anisa Mohammed and retired Australian Lisa Sthalekar.

In the list for bowlers, Nida Dar (up four places to 35th) and Aliya Riaz (up 16 places to 79th) are the others to gain in the latest update for Pakistan, while Masabata Klaas (up five places to 41st) and Chloe Tryon (up three places to 54th) have advanced for South Africa.