That India are in the final four in ICC World Cup 2019 is down to many moments and performances. Rohit Sharma and Jasprit Bumrah have been the beacons. Others will have to follow if India are to attain glory in England. 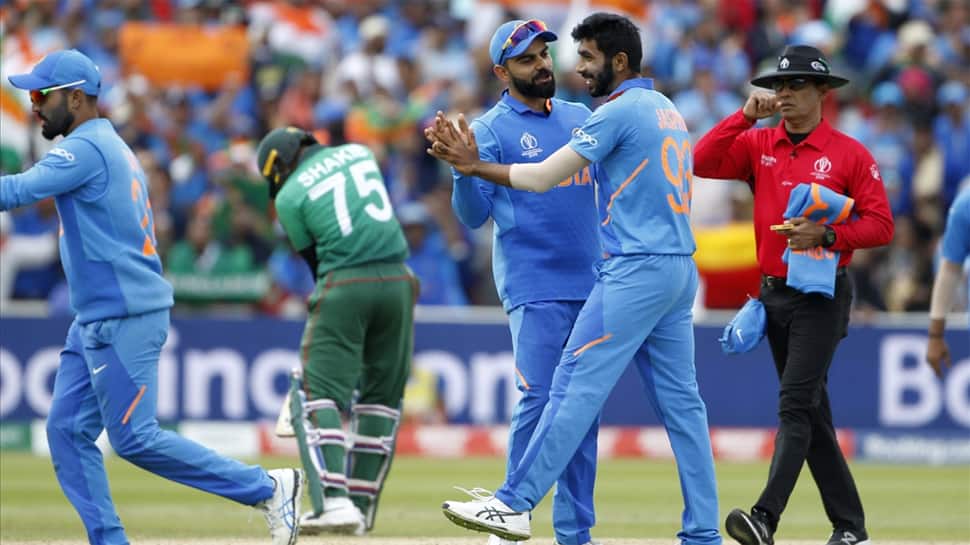 BIRMINGHAM: India are, as expected, into the semi-finals of the ICC Cricket World Cup 2019. It took one match longer than many would have expected, courtesy the somewhat quizzical defeat to hosts England at Edgbaston on Sunday. Two days later, on the same dry pitch, Virat Kohli's team held off a stiff Bangladesh challenge to join defending champions Australia in the final four.

It wasn’t easy to beat Bangladesh, who did superbly to pull India back to 314/9 on a track on which their coach Steve Rhodes reckoned 370 was gettable, and then gave Kohli’s side a scare thanks to a spirited unbeaten 51 from Mohammad Saifuddin.

But beat Bangladesh they did, and now India head to Leeds to play the ousted Sri Lanka on Saturday.

India vs Bangladesh at Edgbaston outdid the big battle that never was, India vs Pakistan at Old Trafford on June 16. Bangladesh punched hard, but ultimately didn’t have enough gas in the tank. It came down to some terrific bowling from the top-ranked bowler in ODIs, the irrepressible Jasprit Bumrah, to seal a 28-run win on Tuesday. Twenty-eight runs. A sizeable margin in the end, but it could have been very different had Bangladesh’s senior batsmen not been undone at regular junctures of their chase.

Hardik Pandya's smart changes of pace accounted for the wickets of Soumya Sarkar for 33, Shakib Al Hasan for 66 and Liton Das for 22. Note the scores – 33, 66 and 22. Had Soumya or Liton- who struck an outrageously cool six off Pandya moments before mistiming the tamest of pull shots to midwicket – hung around a while longer, Bangladesh may have won.

But games of cricket are won by such moments, momentary lapses of judgement, rushes of blood to the head. Pandya held his composure to hustle with quicker, back-of-length-deliveries and clever slower ones. The ball that stopped on Shakib and elicited a push to cover was one such gem. India took their chances, Bangladesh bossed a few vital passages but in the end, it was one vital lapse from Tamim Iqbal that Rhodes was left to rue.

On nine, Rohit Sharma pulled a short ball from Mustafizur Rahman from outside off stump and was dropped by Tamim running across to his left from deep square leg.

Rohit has jostled for top billing at this World Cup in England, at Edgbaston scoring his fourth hundred of the tournament – an achievement only Kumar Sangakkara before him as managed, in 2015 – to move to the top of the run chart. He has been the proverbial cat with nine lives this tournament, dropped four times in seven matches. He has rode these slices of luck rather exceptionally.

In India’s first match of the World Cup in Southampton, Rohit was put down by South Africa skipper Faf du Plessis at second slip. Rohit was forced into a tentative push at Kagiso Rabada, the ball kissed his glove and flew to du Plessis who dived forward but could not hold on. Rohit was on 1 at the time and finished not out on 122, an innings which Kohli termed the best he’d seen from his opener.

In India’s second match, against Australia at The Oval, Rohit was on 2 when he twirled a ball from Mitchell Starc in the air towards short midwicket where Nathan Coulter-Nile leapt to his right but put down the catch. Rohit added 55 to his total and helped Shikhar Dhawan put on 127 in 22.3 overs which proved match-shaping.

In the second over of India’s chase against England at Edgbaston on Sunday, Rohit was dropped on 4 by Joe Root at second slip when driving at Jofra Archer. He went on to get 102, his third hundred of this World Cup. This has been Rohit’s World Cup in many ways, his easy-on-the-eye batting so valuable across various surfaces.

Given a life by Tamim early in the piece Tuesday, Rohit made Bangladesh pay. That first hour, say Rhodes, really hurt his team. Rohit hurried to his 26th ODI century and then fell moments later, and his partner in an opening stand of 180 in 29.2 overs, KL Rahul, fell soon after. India lost Rohit, Rahul, Kohli and Pandya inside ten overs. Mustafizur took out Kohli and Pandya in a double-wicket maiden 39th over. Later, Mustafizur dismissed MS Dhoni, Bhuvneshwar Kumar and Mohammed Shami in the final over of India’s chase.

It could have been Bangladesh’s game, but Pandya and Bumrah dashed their hopes of a famous win. Each of Bumrah’s four wickets came after the 32nd over. Sabbir Rahman’s run-a-ball 36 was ended in the 43rd. In the 48th, Bumrah bowled Rubel Hossain and Mustafizur off successive deliveries to end the match. He roared each time. Those two bowled dismissals meant the world to him. They are, in his own words after the match, what he trains hard for in the nets. They are, to quote Bumrah, the result of a solid work ethic. “Everything is preparation,” said Bumrah of his ability to rock up to the crease and nail yorkers.

Bumrah, ranked No 1 in ODIs. On the path to greatness. Already the creator of such magic in white-ball cricket, chiefly in ODIs where he could end up as India’s best faster bowler of all, the number of wickets be damned.

He is the undisputed leader of this Indian bowling attack, arguably the best in this World Cup. To see Bumrah walking over from mid-on to tell Pandya to cool down and keep it simple after Saifuddin disdainfully swung him for four underlined his position. Bumrah sets his own fields, at times. He has the belief to convince Kohli and Dhoni when he feels right about a plan. It’s not so much a gut feeling as the result of the hard yards put in during training. Sure, some of it comes from confidence and the feeling of being a bowler at the height of his powers, but Bumrah’s success in England is the result of a lot of bloody hard work.

He has 14 wickets in this World Cup. Shami stepped up brilliantly when injury sidelined Bhuvneshwar Kumar for three matches, taking 13 wickets and bowling India to a narrow win over Afghanistan with a World Cup hat-trick – just the second by an Indian bowler. But it is Bumrah, the thinker, who has been the golden man for India all tournament. Keeping runs down, taking wickets almost each time Kohli has called him back into the attack.

India are in the World Cup semi-finals, expectedly. They will probably beat Sri Lanka in Leeds. Their middle order has serious issues and its threatening to be properly exposed. On Tuesday, they were forced to drop Kuldeep Yadav. They have lost Shikhar Dhawan, and not one of Kohli’s five half-centuries has been converted into a century.

That India are in the final four is down to many moments and performances. Rohit and Bumrah have been the beacons. Others will have to follow if India are to attain glory in England. They can look at these two superstars for inspiration.